Aeneas and Many Heroes 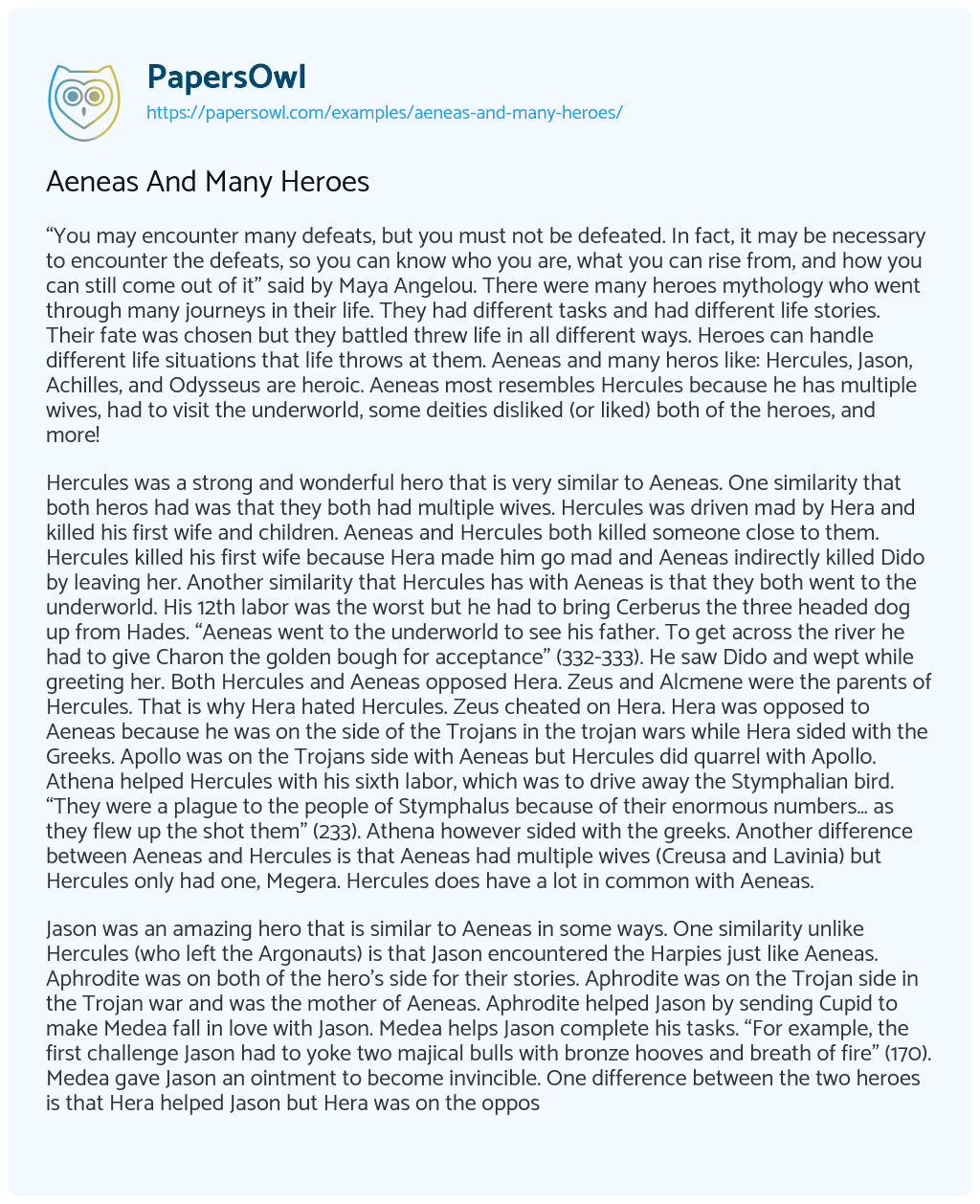 “You may encounter many defeats, but you must not be defeated. In fact, it may be necessary to encounter the defeats, so you can know who you are, what you can rise from, and how you can still come out of it” said by Maya Angelou. There were many heroes mythology who went through many journeys in their life. They had different tasks and had different life stories. Their fate was chosen but they battled threw life in all different ways. Heroes can handle different life situations that life throws at them. Aeneas and many heros like: Hercules, Jason, Achilles, and Odysseus are heroic. Aeneas most resembles Hercules because he has multiple wives, had to visit the underworld, some deities disliked (or liked) both of the heroes, and more!

Hercules was a strong and wonderful hero that is very similar to Aeneas. One similarity that both heros had was that they both had multiple wives. Hercules was driven mad by Hera and killed his first wife and children. Aeneas and Hercules both killed someone close to them. Hercules killed his first wife because Hera made him go mad and Aeneas indirectly killed Dido by leaving her. Another similarity that Hercules has with Aeneas is that they both went to the underworld. His 12th labor was the worst but he had to bring Cerberus the three headed dog up from Hades. “Aeneas went to the underworld to see his father. To get across the river he had to give Charon the golden bough for acceptance” (332-333). He saw Dido and wept while greeting her. Both Hercules and Aeneas opposed Hera. Zeus and Alcmene were the parents of Hercules. That is why Hera hated Hercules. Zeus cheated on Hera. Hera was opposed to Aeneas because he was on the side of the Trojans in the trojan wars while Hera sided with the Greeks. Apollo was on the Trojans side with Aeneas but Hercules did quarrel with Apollo. Athena helped Hercules with his sixth labor, which was to drive away the Stymphalian bird. “They were a plague to the people of Stymphalus because of their enormous numbers… as they flew up the shot them” (233). Athena however sided with the greeks. Another difference between Aeneas and Hercules is that Aeneas had multiple wives (Creusa and Lavinia) but Hercules only had one, Megera. Hercules does have a lot in common with Aeneas.

Jason was an amazing hero that is similar to Aeneas in some ways. One similarity unlike Hercules (who left the Argonauts) is that Jason encountered the Harpies just like Aeneas. Aphrodite was on both of the hero’s side for their stories. Aphrodite was on the Trojan side in the Trojan war and was the mother of Aeneas. Aphrodite helped Jason by sending Cupid to make Medea fall in love with Jason. Medea helps Jason complete his tasks. “For example, the first challenge Jason had to yoke two majical bulls with bronze hooves and breath of fire” (170). Medea gave Jason an ointment to become invincible. One difference between the two heroes is that Hera helped Jason but Hera was on the opposite side of the Trojans (Aeneas). Hera gets Aphrodite to send Cupid to help Jason. Jason does not have as many similarities as Hercules does with Aeneas.

Odysseus was a hero who fought in the Trojan war and sailed for a long time. Fighting in the Trojan War is one of the major similarities between Odysseus and Aeneas. The Trojan War was a big part of Greek Mythology. Odysseus was on the Greek side but Aeneas was on the Trojan side. Odysseus passed the Sirens with Athena looking over him unlike Aeneas. Aeneas passed the harpies while Odysseus did not. Odysseus tied himself to the ship and told his men to plug their ears so they could pass the sirens and get advice. Another difference is that Penelope, Odysseus’s loyal wife, is the wife that Odysseus came back for after 20 years. Aeneas had multiple wives unlike Odysseus. For the most part, Odysseus isn’t as similar to Aeneas than Hercules was.

Achilles was a great hero that was part of the Trojan war. One major similarity is that they both fought in the the Trojan war. A major difference between them is that they were on opposite sides during the Trojan War. Aeneas was with the Trojans while Achilles sided with the greeks. Aeneas fought for the Trojans as soon as he could without hesitation but convincing Achilles took a while. One tragedy is even though Achilles killed Hector and the Greeks won is that Achilles himself got killed by Paris. That is another difference between Aeneas because he was the only major Trojan that escaped and did not get killed. It was sweet that Aeneas had his father on his shoulder and holding his son’s hand. It was sad that the Trojans lost and that there were many deaths on both sides.

As we can see Aeneas most resembles Hercules because he has multiple wives, had to visit the underworld, some deities disliked (or liked) both of the heroes, and more! All the heroes had similarities but Hercules had the most. All the heroes fought threw life differently and saw each other or was part of their group. You may get defeated and lose a battle but the war with life isn’t over! The heroes handled different life differently but they had similar lives. In literature and in history everything comes together and that is what happens in Greek Mythology. There are multiple stories of different heroes. All in all, Hercules had the most similarities in his life compared to Aeneas.

Aeneas And Many Heroes. (2021, Apr 05). Retrieved from https://papersowl.com/examples/aeneas-and-many-heroes/

God Vs Humans in the Iliad and the Odyssey

The Iliad and Beowulf