A Response Essay on Dracula (Film Adaptation and Book) 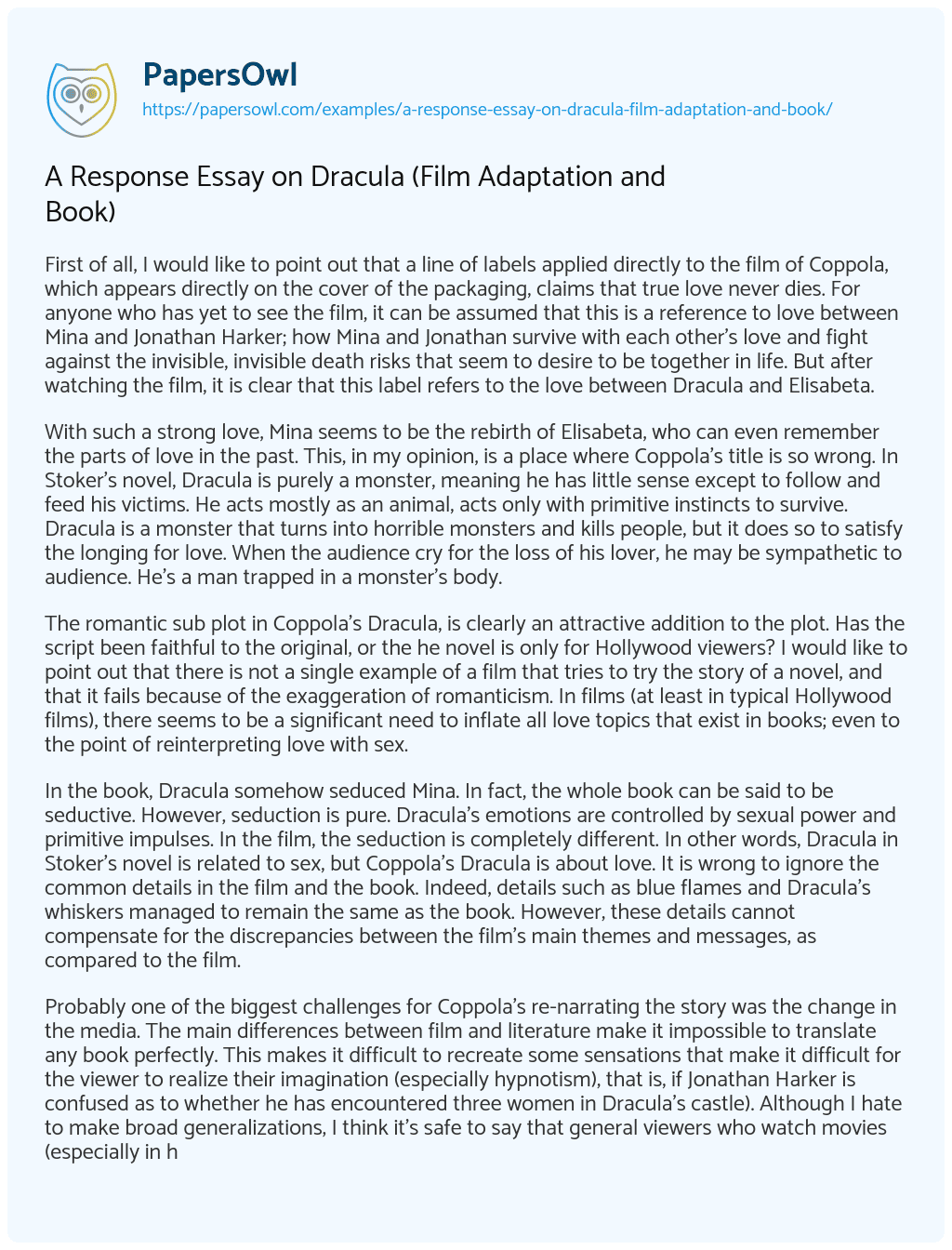 First of all, I would like to point out that a line of labels applied directly to the film of Coppola, which appears directly on the cover of the packaging, claims that true love never dies. For anyone who has yet to see the film, it can be assumed that this is a reference to love between Mina and Jonathan Harker; how Mina and Jonathan survive with each other’s love and fight against the invisible, invisible death risks that seem to desire to be together in life. But after watching the film, it is clear that this label refers to the love between Dracula and Elisabeta.

With such a strong love, Mina seems to be the rebirth of Elisabeta, who can even remember the parts of love in the past. This, in my opinion, is a place where Coppola’s title is so wrong. In Stoker’s novel, Dracula is purely a monster, meaning he has little sense except to follow and feed his victims. He acts mostly as an animal, acts only with primitive instincts to survive. Dracula is a monster that turns into horrible monsters and kills people, but it does so to satisfy the longing for love. When the audience cry for the loss of his lover, he may be sympathetic to audience. He’s a man trapped in a monster’s body.

The romantic sub plot in Coppola’s Dracula, is clearly an attractive addition to the plot. Has the script been faithful to the original, or the he novel is only for Hollywood viewers? I would like to point out that there is not a single example of a film that tries to try the story of a novel, and that it fails because of the exaggeration of romanticism. In films (at least in typical Hollywood films), there seems to be a significant need to inflate all love topics that exist in books; even to the point of reinterpreting love with sex.

In the book, Dracula somehow seduced Mina. In fact, the whole book can be said to be seductive. However, seduction is pure. Dracula’s emotions are controlled by sexual power and primitive impulses. In the film, the seduction is completely different. In other words, Dracula in Stoker’s novel is related to sex, but Coppola’s Dracula is about love. It is wrong to ignore the common details in the film and the book. Indeed, details such as blue flames and Dracula’s whiskers managed to remain the same as the book. However, these details cannot compensate for the discrepancies between the film’s main themes and messages, as compared to the film.

Probably one of the biggest challenges for Coppola’s re-narrating the story was the change in the media. The main differences between film and literature make it impossible to translate any book perfectly. This makes it difficult to recreate some sensations that make it difficult for the viewer to realize their imagination (especially hypnotism), that is, if Jonathan Harker is confused as to whether he has encountered three women in Dracula’s castle). Although I hate to make broad generalizations, I think it’s safe to say that general viewers who watch movies (especially in horror / monster genres) are very different from reading books. This affects many aspects of how the story is told, even from the progress of time to finite details, even the basic themes. Cinema lovers (including myself) tend to have a shorter attention span and are less likely to) work to reach the basic ideas and subtleties in the story. Most of the time, while the films (especially the big Hollywood blockbusters) are expected to tell the story on their own, the books can be expected to require some more reading. It seems to be no coincidence that people watch movies and read books.

In Coppola’s Dracula, I saw this concept impressively influenced characters. Each of the characters has a reduced role. Mina played a role further behind Dracula’s capture. In fact, he went to Jonathan to point a gun at the film to protect his lover’s past life. Another difference between film and literature is the creative process and different levels of complexity within the construction. As Stoker wrote Dracula, he did a great deal of research, just like Coppola. However, when it was time to bring everything together, Coppola had to work harder than Stoker.

After all, I like the way Coppola interprets Stoker’s story. What he added and changed was certainly interesting compared to the original. Coppola is also an effects specialist. His metaphors, which he added to the landscape and atmosphere of the story, strengthened the horror in many subtle ways. The only thing that is pampering for me is that, according to the title, there is a big misunderstanding about what Stoker’s novel is really about. If the film was called Francis Ford Coppola’s Dracula, maybe I’d be happy, but unfortunately, the Hollywood mentality changed the right thing. I have a hard time believing in keeping Coppola trying to preserve the same themes and basic messages.

A Response Essay on Dracula (Film Adaptation and Book). (2019, Mar 02). Retrieved from https://papersowl.com/examples/a-response-essay-on-dracula-film-adaptation-and-book/

The Different Adaptations of Dracula

Feminism in Dracula by Bram Stoker

Roles of Sexuality and Gender in Dracula

Essay about Dracula by Bram Stoker