“A Eye for an Eye Makes the Whole World Blind” 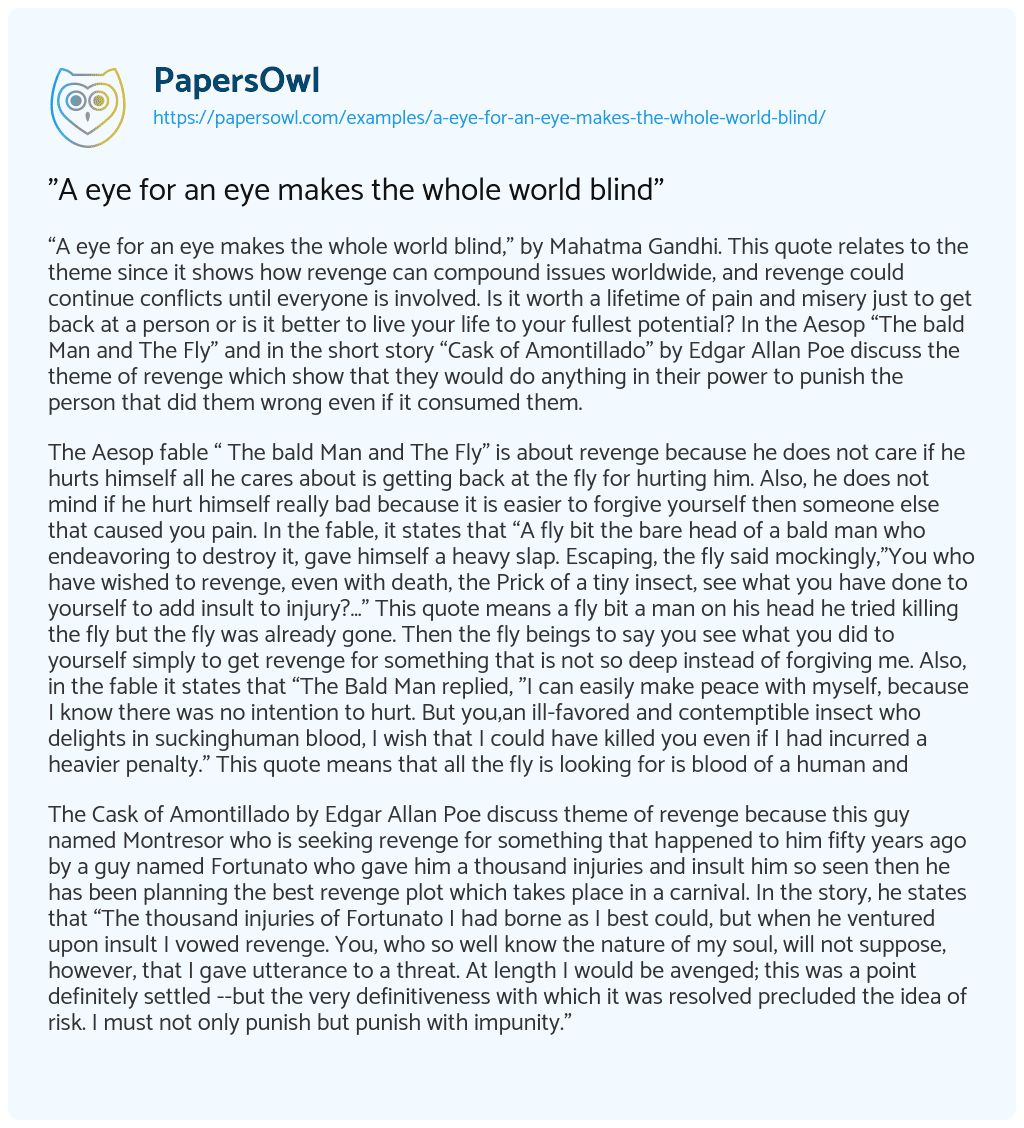 “A eye for an eye makes the whole world blind,” by Mahatma Gandhi. This quote relates to the theme since it shows how revenge can compound issues worldwide, and revenge could continue conflicts until everyone is involved. Is it worth a lifetime of pain and misery just to get back at a person or is it better to live your life to your fullest potential? In the Aesop “The bald Man and The Fly” and in the short story “Cask of Amontillado” by Edgar Allan Poe discuss the theme of revenge which show that they would do anything in their power to punish the person that did them wrong even if it consumed them.

The Aesop fable “ The bald Man and The Fly” is about revenge because he does not care if he hurts himself all he cares about is getting back at the fly for hurting him. Also, he does not mind if he hurt himself really bad because it is easier to forgive yourself then someone else that caused you pain. In the fable, it states that “A fly bit the bare head of a bald man who endeavoring to destroy it, gave himself a heavy slap. Escaping, the fly said mockingly,”You who have wished to revenge, even with death, the Prick of a tiny insect, see what you have done to yourself to add insult to injury?…” This quote means a fly bit a man on his head he tried killing the fly but the fly was already gone. Then the fly beings to say you see what you did to yourself simply to get revenge for something that is not so deep instead of forgiving me. Also, in the fable it states that “The Bald Man replied, “I can easily make peace with myself, because I know there was no intention to hurt. But you,an ill-favored and contemptible insect who delights in suckinghuman blood, I wish that I could have killed you even if I had incurred a heavier penalty.” This quote means that all the fly is looking for is blood of a human and

The Cask of Amontillado by Edgar Allan Poe discuss theme of revenge because this guy named Montresor who is seeking revenge for something that happened to him fifty years ago by a guy named Fortunato who gave him a thousand injuries and insult him so seen then he has been planning the best revenge plot which takes place in a carnival. In the story, he states that “The thousand injuries of Fortunato I had borne as I best could, but when he ventured upon insult I vowed revenge. You, who so well know the nature of my soul, will not suppose, however, that I gave utterance to a threat. At length I would be avenged; this was a point definitely settled –but the very definitiveness with which it was resolved precluded the idea of risk. I must not only punish but punish with impunity.”

"A eye for an eye makes the whole world blind". (2019, Jan 06). Retrieved from https://papersowl.com/examples/a-eye-for-an-eye-makes-the-whole-world-blind/

Essay about the Nature of Evil