What is a Renaissance? 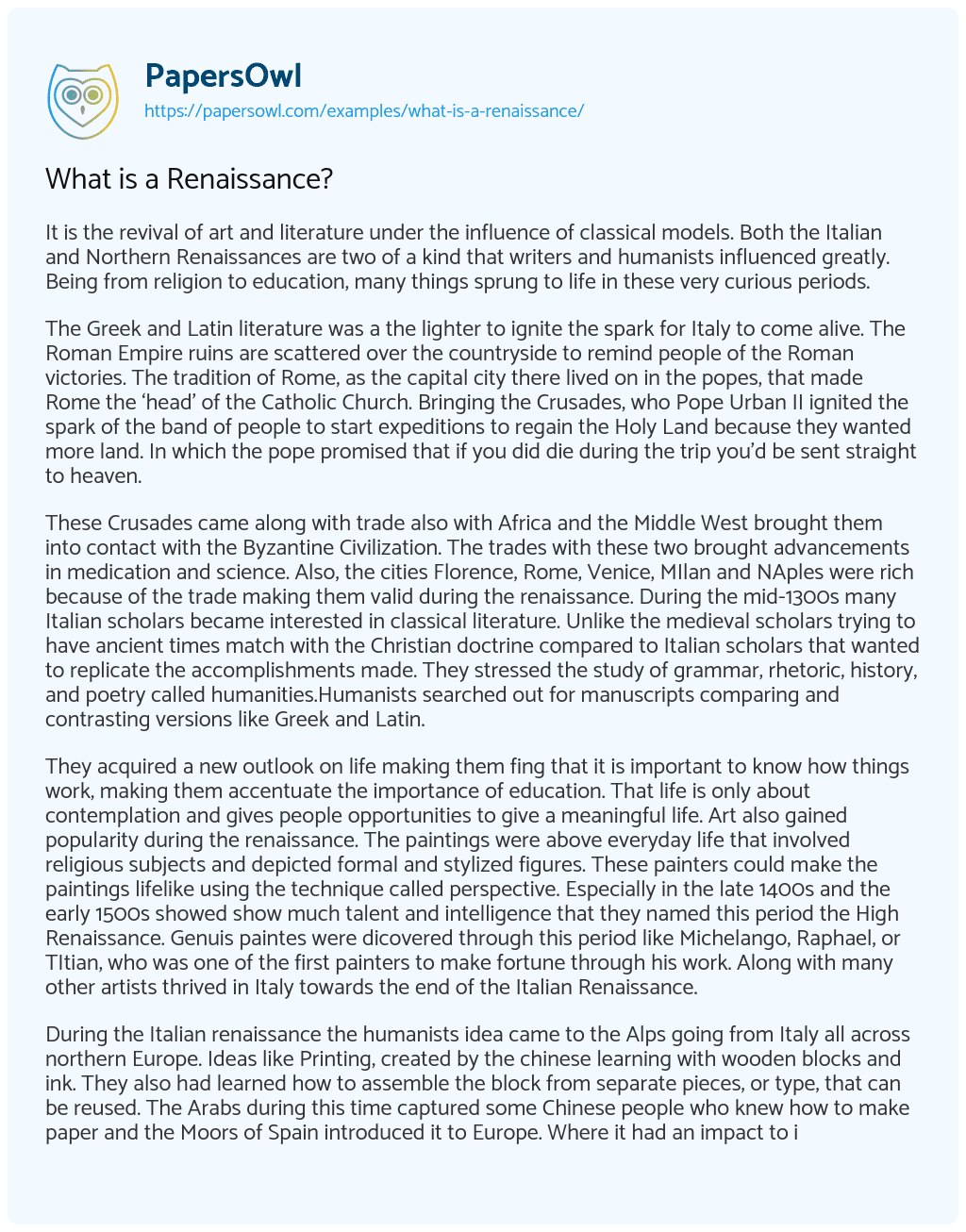 It is the revival of art and literature under the influence of classical models. Both the Italian and Northern Renaissances are two of a kind that writers and humanists influenced greatly. Being from religion to education, many things sprung to life in these very curious periods.

The Greek and Latin literature was a the lighter to ignite the spark for Italy to come alive. The Roman Empire ruins are scattered over the countryside to remind people of the Roman victories. The tradition of Rome, as the capital city there lived on in the popes, that made Rome the ‘head’ of the Catholic Church. Bringing the Crusades, who Pope Urban II ignited the spark of the band of people to start expeditions to regain the Holy Land because they wanted more land. In which the pope promised that if you did die during the trip you’d be sent straight to heaven.

These Crusades came along with trade also with Africa and the Middle West brought them into contact with the Byzantine Civilization. The trades with these two brought advancements in medication and science. Also, the cities Florence, Rome, Venice, MIlan and NAples were rich because of the trade making them valid during the renaissance. During the mid-1300s many Italian scholars became interested in classical literature. Unlike the medieval scholars trying to have ancient times match with the Christian doctrine compared to Italian scholars that wanted to replicate the accomplishments made. They stressed the study of grammar, rhetoric, history, and poetry called humanities.Humanists searched out for manuscripts comparing and contrasting versions like Greek and Latin.

They acquired a new outlook on life making them fing that it is important to know how things work, making them accentuate the importance of education. That life is only about contemplation and gives people opportunities to give a meaningful life. Art also gained popularity during the renaissance. The paintings were above everyday life that involved religious subjects and depicted formal and stylized figures. These painters could make the paintings lifelike using the technique called perspective. Especially in the late 1400s and the early 1500s showed show much talent and intelligence that they named this period the High Renaissance. Genuis paintes were dicovered through this period like Michelango, Raphael, or TItian, who was one of the first painters to make fortune through his work. Along with many other artists thrived in Italy towards the end of the Italian Renaissance.

During the Italian renaissance the humanists idea came to the Alps going from Italy all across northern Europe. Ideas like Printing, created by the chinese learning with wooden blocks and ink. They also had learned how to assemble the block from separate pieces, or type, that can be reused. The Arabs during this time captured some Chinese people who knew how to make paper and the Moors of Spain introduced it to Europe. Where it had an impact to intellectual spirit.

People believed that Gutenberg, the first to use a movable type to print books, developed a printing press on which he made a copy of the bible between the dates 1453 and 1456. Publishers took into this press and books helped the spread of knowledge to many people. A Dutch scholar Desiderius Erasmus, was the greatest humanist of northern Europe. He wrote books like In Praise of Folly that called out ignorance, superstition and vice amoun the clergy and ordinary Christians. His friend wrote Utopia, a book in which he called out the society of his day describing his ideal society. Bringing up the English literature of this period.

Literature was reaching its peak in the late 1500s and the early 1600s along with plays by William Shakespeare and others. He wanted to bring up the same type of questions that humanists asked. Using emotions and personality or feeling was a hard thing to capture for a writer so that’s why Shakespeare had created scenes like Romeo and Juliet, Macbeth, or Hamlet which were real as could be in there time.

Art in this period was flourishing with new ideas and artists. Hubert and Jan Van Eyck was one of the first few to perfect the techniques of the oil paintings on a canvas. The painting Adoration of the Lamb eventually was the altarpiece of the cathedral at Ghent. He sought out to use his paintings as to what intolerance and harshness he saw in his world. Along with other famous artists they reflected the world around them with their portraits and with books like Hans Holbein and Albrecht Durer.

These periods clearly both mirror each other. The Italian renaissance is the one who started a type of butterfly effect on the countries and people around it. Cultured minds have made the renaissance of what it is and what we see in our books today. The Northern renaissance was more of painting and art work than of what the Italian was a more of writing and education period making them grow intellectually.

What is a Renaissance?. (2019, Dec 26). Retrieved from https://papersowl.com/examples/what-is-a-renaissance/