The Physiology of Asthma 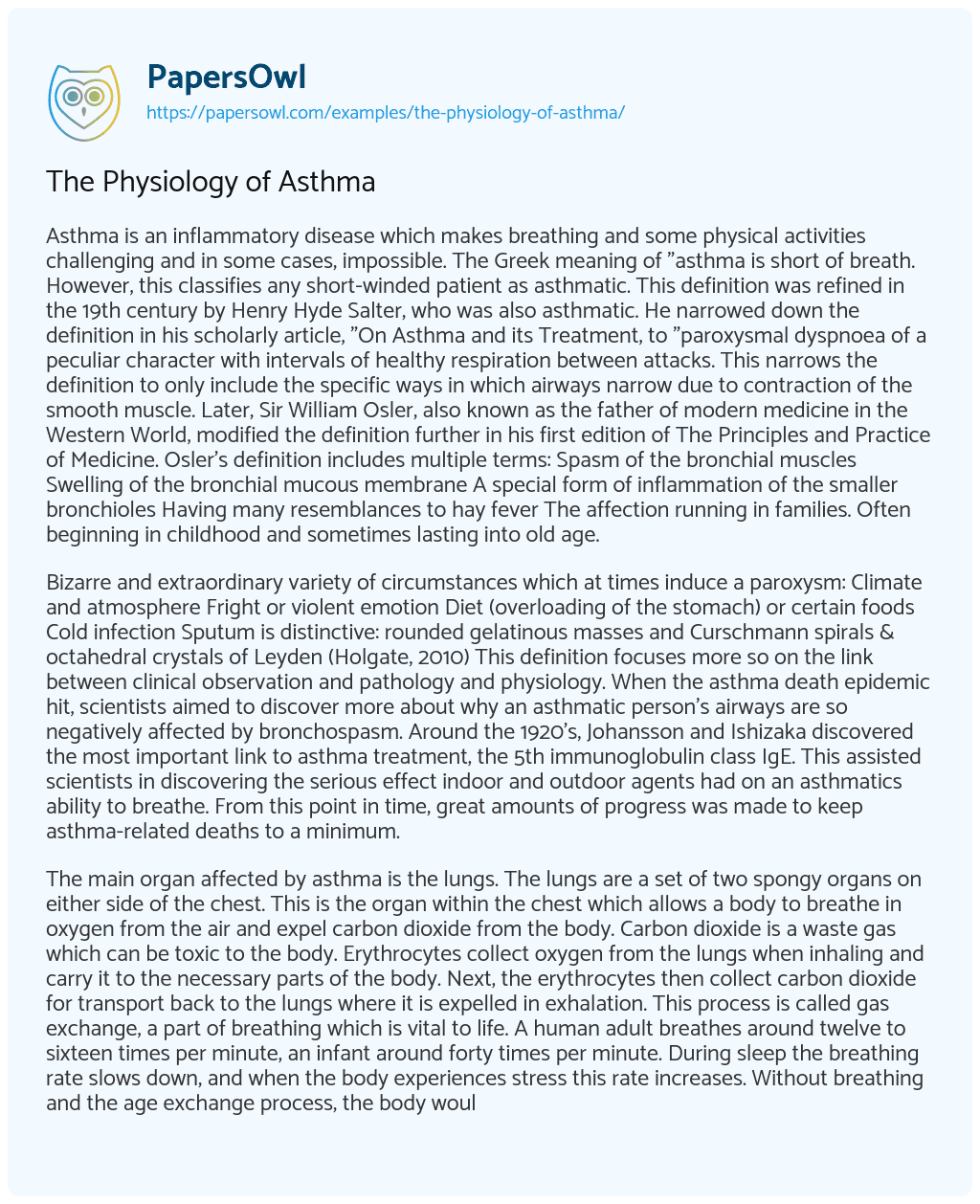 Asthma is an inflammatory disease which makes breathing and some physical activities challenging and in some cases, impossible. The Greek meaning of “asthma is short of breath. However, this classifies any short-winded patient as asthmatic. This definition was refined in the 19th century by Henry Hyde Salter, who was also asthmatic. He narrowed down the definition in his scholarly article, “On Asthma and its Treatment, to “paroxysmal dyspnoea of a peculiar character with intervals of healthy respiration between attacks. This narrows the definition to only include the specific ways in which airways narrow due to contraction of the smooth muscle. Later, Sir William Osler, also known as the father of modern medicine in the Western World, modified the definition further in his first edition of The Principles and Practice of Medicine. Osler’s definition includes multiple terms: Spasm of the bronchial muscles Swelling of the bronchial mucous membrane A special form of inflammation of the smaller bronchioles Having many resemblances to hay fever The affection running in families. Often beginning in childhood and sometimes lasting into old age.

Bizarre and extraordinary variety of circumstances which at times induce a paroxysm: Climate and atmosphere Fright or violent emotion Diet (overloading of the stomach) or certain foods Cold infection Sputum is distinctive: rounded gelatinous masses and Curschmann spirals & octahedral crystals of Leyden (Holgate, 2010) This definition focuses more so on the link between clinical observation and pathology and physiology. When the asthma death epidemic hit, scientists aimed to discover more about why an asthmatic person’s airways are so negatively affected by bronchospasm. Around the 1920’s, Johansson and Ishizaka discovered the most important link to asthma treatment, the 5th immunoglobulin class IgE. This assisted scientists in discovering the serious effect indoor and outdoor agents had on an asthmatics ability to breathe. From this point in time, great amounts of progress was made to keep asthma-related deaths to a minimum.

The main organ affected by asthma is the lungs. The lungs are a set of two spongy organs on either side of the chest. This is the organ within the chest which allows a body to breathe in oxygen from the air and expel carbon dioxide from the body. Carbon dioxide is a waste gas which can be toxic to the body. Erythrocytes collect oxygen from the lungs when inhaling and carry it to the necessary parts of the body. Next, the erythrocytes then collect carbon dioxide for transport back to the lungs where it is expelled in exhalation. This process is called gas exchange, a part of breathing which is vital to life. A human adult breathes around twelve to sixteen times per minute, an infant around forty times per minute. During sleep the breathing rate slows down, and when the body experiences stress this rate increases. Without breathing and the age exchange process, the body would go into anoxia, the lack of oxygen, and within four minutes brain cells begin dying. This can lead to major brain damage, and ultimately death. There are other organs which make breathing possible.

However, the main focus when addressing asthma is the lungs and connected airways. The respiratory system is tightly integrated and extends from the nostril to the diaphragm. Each part uniquely designed to accomplish the functions of the movement and circulation of oxygen and carbon dioxide. The lungs are composed of specialized cells and tissues. Epithelial cells line the lungs and contain cilia, which trap unwanted particles and prevent them from reaching the lungs to avoid infection. Cilia also assists in expelling the unwanted waste from the lungs during exhalation. Beneath these epithelial cells is a membrane formed as a foundation for the epithelial cells. More inward than this is a tissue filled with mucous glands and other specialized cells such as white blood cells. Furthermore, the last layer is composed of smooth muscle. There are two layers of serous membrane around the lungs. The visceral pleura covers the external surface of the lungs and is attached with connective tissue, and the parietal pleura covers the thoracic wall and superior face of the diaphragm. Between the two layers in the pleural cavity is pleural fluid, this provides lubrication of the lung to prevent friction when breathing.

From the top of the respiratory system, we begin with the nose, nasal cavity, and oral cavity, where oxygen is pulled in from the outside world. Next oxygen is pulled back through the pharynx, which connects the nose and mouth to the esophagus. Oxygen is then pulled through the larynx, a hollow muscular organ which forms an air passage to the lungs and holds the vocal cords, also known as the voice box. The trachea is next in line, this is a large tube which extends from the larynx to the bronchial tubes. The trachea is reinforced by rings of cartilage and is commonly known as the windpipe. The bronchi are major air passages that extend from the trachea and branch extensively. Finally, oxygen reaches the lungs and then the alveoli. There are two types of alveolar cells. Type 1 alveolar cells are flat epithelial cells where gas exchange occurs, and type 2 alveolar cells produce surfactant which facilitates alveolar inflation. Alveolar cells contain pores which permit the flow of air between alveoli. It is by this respiration mechanism that gas exchange successfully occurs within the body. Pathophysiological factors to be included in consideration of asthma include bronchiolar inflammation with airway constriction and resistance.

The constriction and resistance manifests physically as coughing, wheezing, and shortness of breath. Asthma also has an intense effect on the trachea, bronchi, and bronchioles. Bronchiolar inflammation may be present even when the symptoms of an asthma attack are dormant. Bronchoconstriction, constriction of the airway, and bronchospasm, rapid contraction of the bronchial smooth muscle which causes the airway to narrow, is considered an asthma attack. An asthma attack can be caused by edema, excessive mucus, and epithelial and muscle damage. Edema caused by microvascular leakage may also contribute to the airway narrowing during bronchospasm. Bronchoconstriction and edema are directly affected by airway capillary dilation and leakage. Airway capillary dilation and leakage increase secretions which cause edema and diminish mucus clearance. When the airway is constricted not only in a resting asthmatic airway but in an asthmatic airway during an attack, the airway walls are inflamed and thickened. In a resting asthmatic airway the smooth muscle is relaxed and during an asthma attack the smooth muscle is tightened and there is an excess amount of air trapped within the alveoli. Mucus-secreting cells may also be increased in asthmatic airways, these mucus-secreting cells expand the mucus-secreting glands which in turn secrete more mucus and cause thick mucus plugs which block the airway.

An injury to the epithelium can result in epithelial peeling, resulting in airway impairment due to blockage. If the function of the epithelium’s barrier were to be diminished, toxins and allergens would be allowed entry. This would cause the airways to become hyper-responsive. This is a major feature of asthma. Hyper-responsiveness is a state in which bronchospasm is easily triggered. The severity of this feature depends on how inflamed the airways are. Asthma may also cause a decrease in enzymes which regularly break down inflammatory intermediaries. This will cause reflexive neural effects due to sensory nerve exposure. Asthma can be atopic, nontoxic, or a combination. Atopic asthma starts in childhood and triggers an excessive release of IgE, which in turn initiates B-lymphocyte activation. IgE binds to cells related to inflammation and causes inflammatory mediator release such as nitric oxide, histamine triggering airway inflammation and bronchoconstriction. Nonatopic asthma does not involve an IgE response and usually occurs in adults, typically due to viral infection. Structural changes in the epithelium and other parts of the airway are often seen in patients with asthma. Airway remolding includes airway wall thickening, epithelial hypertrophy, mucous metaplasia, subepithelial fibrosis, myofibroblast hyperplasia, and smooth muscle cell hyperplasia and hypertrophy.

The Physiology of Asthma. (2019, Jun 16). Retrieved from https://papersowl.com/examples/the-physiology-of-asthma/

Factors into the Development of Asthma

Asthma is a Chronic Disease