The Main Idea of “The Stranger” 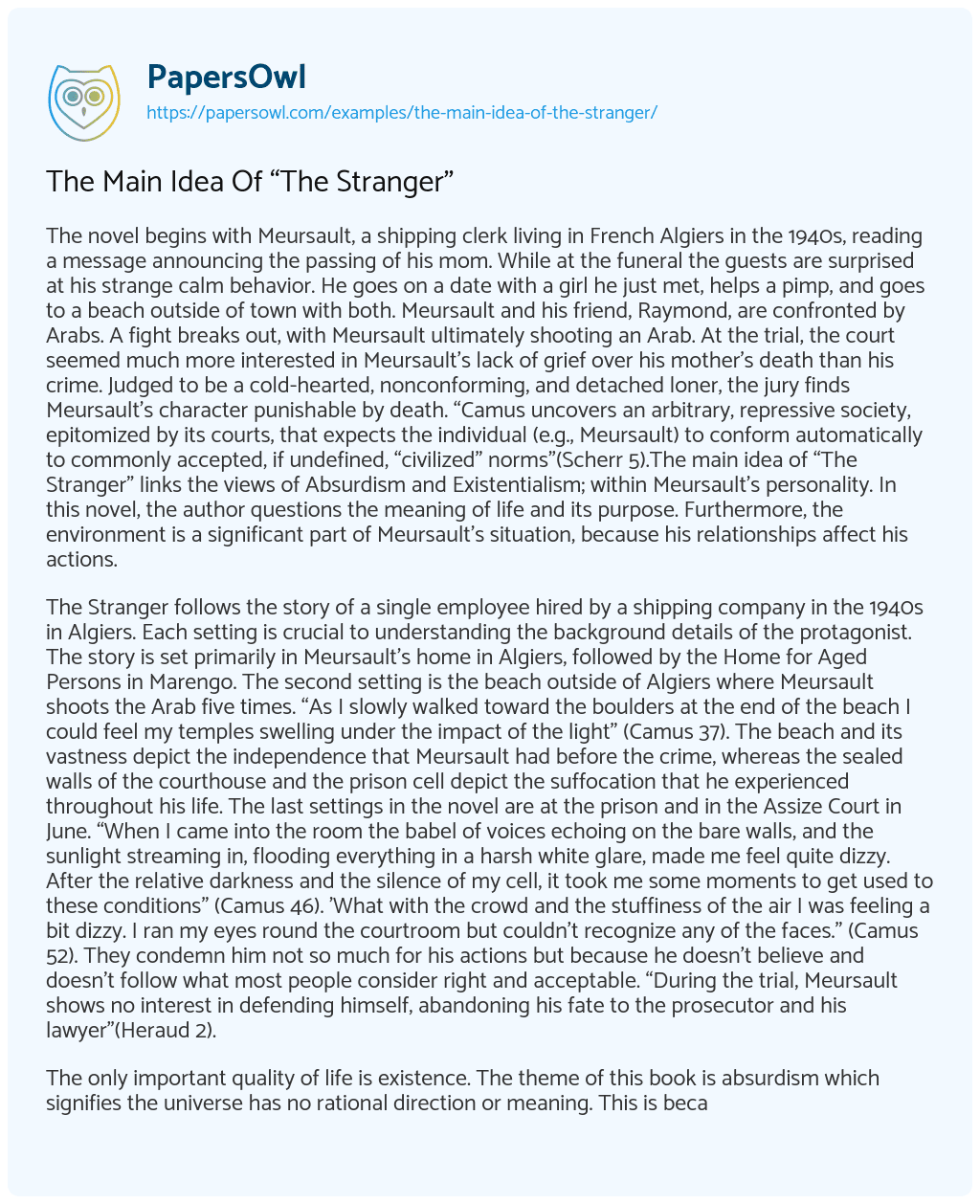 The novel begins with Meursault, a shipping clerk living in French Algiers in the 1940s, reading a message announcing the passing of his mom. While at the funeral the guests are surprised at his strange calm behavior. He goes on a date with a girl he just met, helps a pimp, and goes to a beach outside of town with both. Meursault and his friend, Raymond, are confronted by Arabs. A fight breaks out, with Meursault ultimately shooting an Arab. At the trial, the court seemed much more interested in Meursault’s lack of grief over his mother’s death than his crime. Judged to be a cold-hearted, nonconforming, and detached loner, the jury finds Meursault’s character punishable by death. “Camus uncovers an arbitrary, repressive society, epitomized by its courts, that expects the individual (e.g., Meursault) to conform automatically to commonly accepted, if undefined, “civilized” norms”(Scherr 5).The main idea of “The Stranger” links the views of Absurdism and Existentialism; within Meursault’s personality. In this novel, the author questions the meaning of life and its purpose. Furthermore, the environment is a significant part of Meursault’s situation, because his relationships affect his actions.

The Stranger follows the story of a single employee hired by a shipping company in the 1940s in Algiers. Each setting is crucial to understanding the background details of the protagonist. The story is set primarily in Meursault’s home in Algiers, followed by the Home for Aged Persons in Marengo. The second setting is the beach outside of Algiers where Meursault shoots the Arab five times. “As I slowly walked toward the boulders at the end of the beach I could feel my temples swelling under the impact of the light” (Camus 37). The beach and its vastness depict the independence that Meursault had before the crime, whereas the sealed walls of the courthouse and the prison cell depict the suffocation that he experienced throughout his life. The last settings in the novel are at the prison and in the Assize Court in June. “When I came into the room the babel of voices echoing on the bare walls, and the sunlight streaming in, flooding everything in a harsh white glare, made me feel quite dizzy. After the relative darkness and the silence of my cell, it took me some moments to get used to these conditions” (Camus 46). ‘What with the crowd and the stuffiness of the air I was feeling a bit dizzy. I ran my eyes round the courtroom but couldn’t recognize any of the faces.” (Camus 52). They condemn him not so much for his actions but because he doesn’t believe and doesn’t follow what most people consider right and acceptable. “During the trial, Meursault shows no interest in defending himself, abandoning his fate to the prosecutor and his lawyer”(Heraud 2).

The only important quality of life is existence. The theme of this book is absurdism which signifies the universe has no rational direction or meaning. This is because the main character does not care what his life comes to, all he wants from life is for it to pass day by day without any major conflicts. “Meursault believes in the meaninglessness of life and he acts accordingly, a thing that makes him feel a ‘stranger’ among his people”(Mahdi 2). He gives the reader his philosophic outlook during his time in his prison. Meursault is sentenced to death and is visited in jail by the chaplain. The chaplain starts talking to him about God and Meursault snaps and grabs the priest by the collar. He yells at him not to waste his prayers. With the chaplain trying to push God onto him, he believes he has no time for god even in his final hour. Rather than getting mad at his own situation, Meursault is angered by the chaplains’ false sense of entitlement. “I was on the point of telling him to go, and leave me in peace, when all of a sudden he swung round on me and burst out passionately: “No! No! I refuse to believe it. I’m sure you’ve often wished there was an afterlife.” Of course, I had, I told him”(Camus 74).

Meursault is an absurd hero. The main character who embodies the opposite qualities of traditional heroes like bravery, determination, and a strong sense of personal identity. Meursault is a good example of how a character can be a good character but not necessarily likable. He is a hero because he has a unique perspective on life, that enables the reader to question their own. Camus derives his passion from absurdity in that because he will one day die, every moment can’t go unlived. The stranger lives completely detached from everything, dispassionately. I also think he lacked ambition, purpose, and self-knowledge. When a good opportunity came his way, not only did he not know how to grasp it, but also he did not ponder why it did not make him thrilled. “Thus, Camus has perhaps indirectly proved that Meursault is right when he thinks that involving emotionally with others brings no happiness and that showing no emotion at all leads to contentment and peace of mind, but Meursault has not succeeded in shaping this thought properly”(Mahdi 7). Marriage, to him, is of no great importance, just as the exact day on which his mother died is of no great importance. Raymond offered friendship; Marie herself, and now Meursault is offered a new position in Paris. And it all makes no difference, he says; he doesn’t object.

The main idea is that there is no meaning to life and no matter what happens, the universe keeps moving on. In the beginning, Meursault is a free man and is able to travel and go to the beach and wherever he wants, but that changes when he kills a man and he gets locked up jail waiting to be executed. Meursault might technically be brought before the court for killing the Arab, but he is really on trial for his personality, so he will be sentenced to such a crime. “Meursault’s social deviation from his people and his nonconformity to their prevailing ideas, practices, and views are part of his being an absurd man”(Mahdi 2).

The Main Idea Of “The Stranger”. (2022, Jun 21). Retrieved from https://papersowl.com/examples/the-main-idea-of-the-stranger/

A Character Analysis of Mersault in the Stranger

Meursault as an Absurdist Hero in the Stranger

An Analysis of Mersault’s Moral Decline in the Stranger

Danger to Societal Values in the Stranger