The Color of Water: a Story Told by James McBride 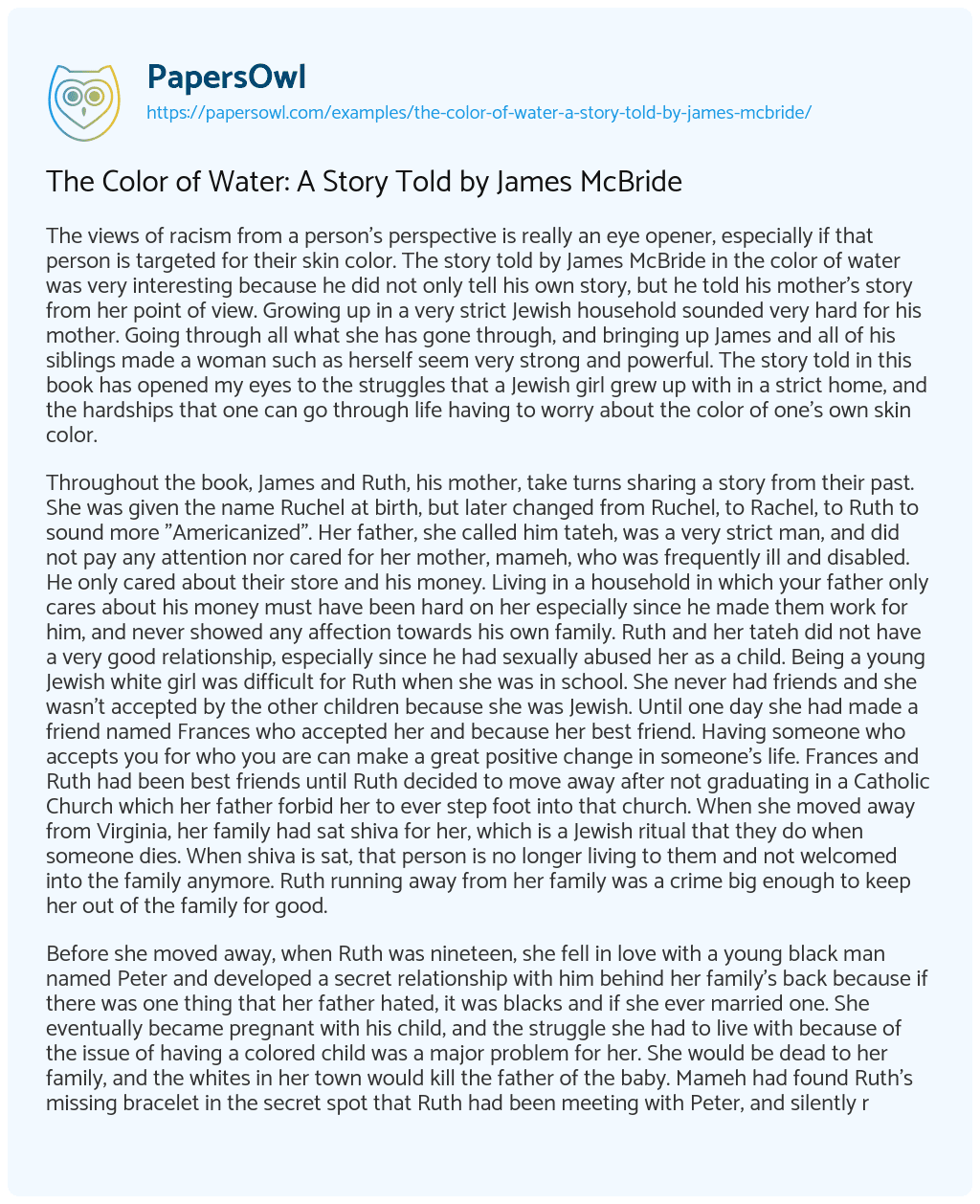 The views of racism from a person’s perspective is really an eye opener, especially if that person is targeted for their skin color. The story told by James McBride in the color of water was very interesting because he did not only tell his own story, but he told his mother’s story from her point of view. Growing up in a very strict Jewish household sounded very hard for his mother. Going through all what she has gone through, and bringing up James and all of his siblings made a woman such as herself seem very strong and powerful. The story told in this book has opened my eyes to the struggles that a Jewish girl grew up with in a strict home, and the hardships that one can go through life having to worry about the color of one’s own skin color.

Throughout the book, James and Ruth, his mother, take turns sharing a story from their past. She was given the name Ruchel at birth, but later changed from Ruchel, to Rachel, to Ruth to sound more “Americanized”. Her father, she called him tateh, was a very strict man, and did not pay any attention nor cared for her mother, mameh, who was frequently ill and disabled. He only cared about their store and his money. Living in a household in which your father only cares about his money must have been hard on her especially since he made them work for him, and never showed any affection towards his own family. Ruth and her tateh did not have a very good relationship, especially since he had sexually abused her as a child. Being a young Jewish white girl was difficult for Ruth when she was in school. She never had friends and she wasn’t accepted by the other children because she was Jewish. Until one day she had made a friend named Frances who accepted her and because her best friend. Having someone who accepts you for who you are can make a great positive change in someone’s life. Frances and Ruth had been best friends until Ruth decided to move away after not graduating in a Catholic Church which her father forbid her to ever step foot into that church. When she moved away from Virginia, her family had sat shiva for her, which is a Jewish ritual that they do when someone dies. When shiva is sat, that person is no longer living to them and not welcomed into the family anymore. Ruth running away from her family was a crime big enough to keep her out of the family for good.

Before she moved away, when Ruth was nineteen, she fell in love with a young black man named Peter and developed a secret relationship with him behind her family’s back because if there was one thing that her father hated, it was blacks and if she ever married one. She eventually became pregnant with his child, and the struggle she had to live with because of the issue of having a colored child was a major problem for her. She would be dead to her family, and the whites in her town would kill the father of the baby. Mameh had found Ruth’s missing bracelet in the secret spot that Ruth had been meeting with Peter, and silently returned the bracelet to Ruth suggesting she go away to New York with her aunts for the summer. Hinting that Mameh probably knew something was wrong, and she had to get away from her father for a little bit to take care of herself. Living in that era must have been extremely difficult. Knowing that real life issues like that have occurred is an eye opener to the laws we have today. Now that love for any gender, race, and sexuality is legal, it’s amazing to witness a change in the society today where people are free to express their love to whomever they want no matter the gender, race, sexuality, or religion. It is very important to bring up a child in an environment where he or she may thrive and feel comfortable in his or her own skin. Going through the stress and heartbreak that Ruth had to go through when she had to secretly get an abortion and hide the existence of her child with a man she thought she loved is harsh on a woman. No one should have to feel unsafe in their own skin in their communities.

When Ruth left Virginia for the summer, she stayed with her aunts who were much more successful than Mameh. She would stay with her grandmother, bubeh, when she’s there. She worked for her aunts leather making factory and met Andrew McBride. Ruth later developed a bad relationship with her strict aunt and left for a different job as a manicurist and had gotten involved with a man who seemed to be pampering her for the wrong reasons. She later ran into Andrew in that area and eventually developed a relationship with Him. They started to live together and were one day married. Andrew wanted to start a church in their apartment, and it grew more and more each service. That church still stands, and she later comes back to it in the future. He later died of cancer and Ruth is left with eight children to raise on her own, and her family refuses to help her because she still remained dead to her family. It must have been very difficult for Ruth to raise her children on her own especially with the heartbreaking refusal from her family when she was in need of desperate help to raise her children. She started working more just enough to help support herself and her family. Living in a situation like that is heartbreaking. The racism she would get from her family for having black children might be unbearable.

Having eleven siblings sounds like an adventure, and an enormous ruckus at the same time. The fact that there were still black, white, and Jewish schools makes it sound like there were still racial issues. It’s bad enough already that the children in the schools would make fun of James for his hair. James had great older siblings whom made good examples for him and his other younger siblings. James has an older sister named Jack who lives on her own older brother Dennis was a very intelligent boy. He held the bar up pretty high for James and his siblings because of how well he succeeded in school and his well presented behavior. On the other hand, James’ sister Helen has set a bad example of dropping out of school, running away to become a hippie, and coming back home pregnant. James was always worried about his mother. Since he was younger, he would always ask his mother why she did not look like him. The worry he had for his mother at a young age shows how much he cares for her. Raising twelve children on her own has got to be extremely difficult especially since her husbands have died. James’ father, Andrew McBride, has passed away when James was at a very young age. His stepfather, Hunter Jordan or as he calls him “daddy”, is the one who had helped mommy raise him.

Ruth believed that her children’s education was most important, as well as their extra curricular activities. Just as Tateh believed that education and hard work was important, although she wanted her children to live a better life with a better relationship between parent and child, something she did not have with her father. She has been an amazing mother raising twelve children all on her own and sending them to college with everything that she had. James had a falling out in high school when he got into drugs, became a thief, and dropped out of school. He became problematic but eventually got back on his feet, finished high school, and left for college. He and his siblings have earned the education to become doctors, lawyers, writers, etc,. His mother must be extremely proud, especially since she raised them all mostly on her own.

Now that James and his siblings are older and successful, they are able to support their mother after all the hard work that she has done raising all twelve mainly on her own. Through the heart breaking treatment from her own family, to the racist remarks on herself and her own family, to raising twelve children on her own, to losing two husbands to death. She truly is a superwoman and deserves all the respect and love from her children for all her hard work that she has been through. The racist remarks that James and his family has lived through, the Jewish racism, the colored skin racism, and having to live under the prejudice of the whites is something difficult to overcome. But what’s more important is that you accept yourself no matter what religion, cultural background, and skin color you are.

The Color of Water: A Story Told by James McBride. (2019, Aug 24). Retrieved from https://papersowl.com/examples/the-color-of-water-a-story-told-by-james-mcbride/

In James Mcbride’s the Color of Water, it Tells the Story of Ruth

The Color of Water is a Biography Written by James McBride

James McBride, Author of the Color of Water

The Color of the Water by James Mcbride

James McBride Explores his Mothers and his own Identify

The Novel the Color of Water