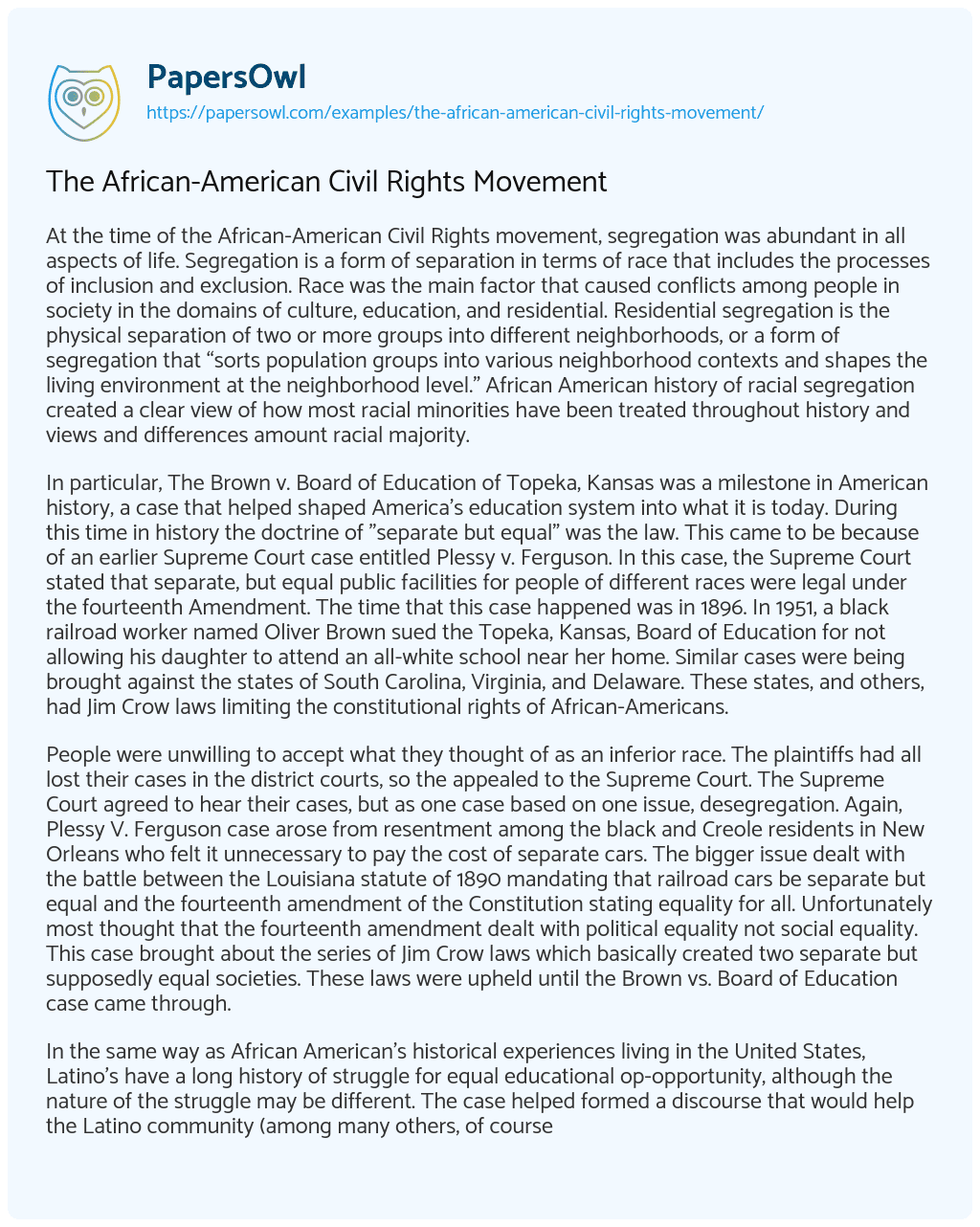 At the time of the African-American Civil Rights movement, segregation was abundant in all aspects of life. Segregation is a form of separation in terms of race that includes the processes of inclusion and exclusion. Race was the main factor that caused conflicts among people in society in the domains of culture, education, and residential. Residential segregation is the physical separation of two or more groups into different neighborhoods, or a form of segregation that “sorts population groups into various neighborhood contexts and shapes the living environment at the neighborhood level.” African American history of racial segregation created a clear view of how most racial minorities have been treated throughout history and views and differences amount racial majority.

In particular, The Brown v. Board of Education of Topeka, Kansas was a milestone in American history, a case that helped shaped America’s education system into what it is today. During this time in history the doctrine of “separate but equal” was the law. This came to be because of an earlier Supreme Court case entitled Plessy v. Ferguson. In this case, the Supreme Court stated that separate, but equal public facilities for people of different races were legal under the fourteenth Amendment. The time that this case happened was in 1896. In 1951, a black railroad worker named Oliver Brown sued the Topeka, Kansas, Board of Education for not allowing his daughter to attend an all-white school near her home. Similar cases were being brought against the states of South Carolina, Virginia, and Delaware. These states, and others, had Jim Crow laws limiting the constitutional rights of African-Americans.

People were unwilling to accept what they thought of as an inferior race. The plaintiffs had all lost their cases in the district courts, so the appealed to the Supreme Court. The Supreme Court agreed to hear their cases, but as one case based on one issue, desegregation. Again, Plessy V. Ferguson case arose from resentment among the black and Creole residents in New Orleans who felt it unnecessary to pay the cost of separate cars. The bigger issue dealt with the battle between the Louisiana statute of 1890 mandating that railroad cars be separate but equal and the fourteenth amendment of the Constitution stating equality for all. Unfortunately most thought that the fourteenth amendment dealt with political equality not social equality. This case brought about the series of Jim Crow laws which basically created two separate but supposedly equal societies. These laws were upheld until the Brown vs. Board of Education case came through.

In the same way as African American’s historical experiences living in the United States, Latino’s have a long history of struggle for equal educational op-opportunity, although the nature of the struggle may be different. The case helped formed a discourse that would help the Latino community (among many others, of course) challenge both physical segregation and language policies. It has become increasingly clear that race is a social construct.

During The Opening of the Breach in 1948, President Harry Truman issued an executive order that eliminated racial discrimination in all of the military branches. The tide began to turn toward equality in the following years with a series of Supreme Court victories for civil rights. African American finally began breaking down racial barriers and challenging segregation with success, and the main point of this effort was the passage of the Civil Rights Act of 1964, which had abolished the Jim Crow laws. This law outlawed discrimination in any type of public accommodation. In 1965, the Voting Rights Act followed, which protected black people’s right to vote by barring discriminatory voting laws.

Moreover, Rosa Parks, a black seamstress, was arrested in Montgomery, Alabama for refusing to give up her bus seat so that white passengers could make use of it. Her arrest sparked the Montgomery Bus Boycott, during which the black citizens of Montgomery refused to ride the city’s buses in protest over the bus system’s policy of racial segregation. It was the first mass-action of the modern civil rights era, and served as an inspiration to other civil rights activists across the nation. At that time, this case happened under Jim Crow Laws, whereas the bus was colored coded; White people sat in the front while Black people had to sit in the back. Which caused busing plans affecting our public school systems and way of life, as well as the lives of countless African-Americans around America.

All in all, Segregation played a major role throughout the lives of the African Americans. African Americans were viewed as unequal, and were set apart from the norms of society. The Negroes as a people have less self-control, are less affected by ultimate advantages, and are less controlled by family ties and standards of morality, than the average even of those poor white people, immigrants or natives, who have the poorest chance. The Brown decision initiated educational reform throughout the United States and was a catalyst in launching the modern Civil Rights Movement. Bringing about change in the years since Brown continues to prove difficult. But the Brown v. Board of Education victory brought Americans one step closer to true freedom and equal rights.

The Legacy of the Civil Rights Movement