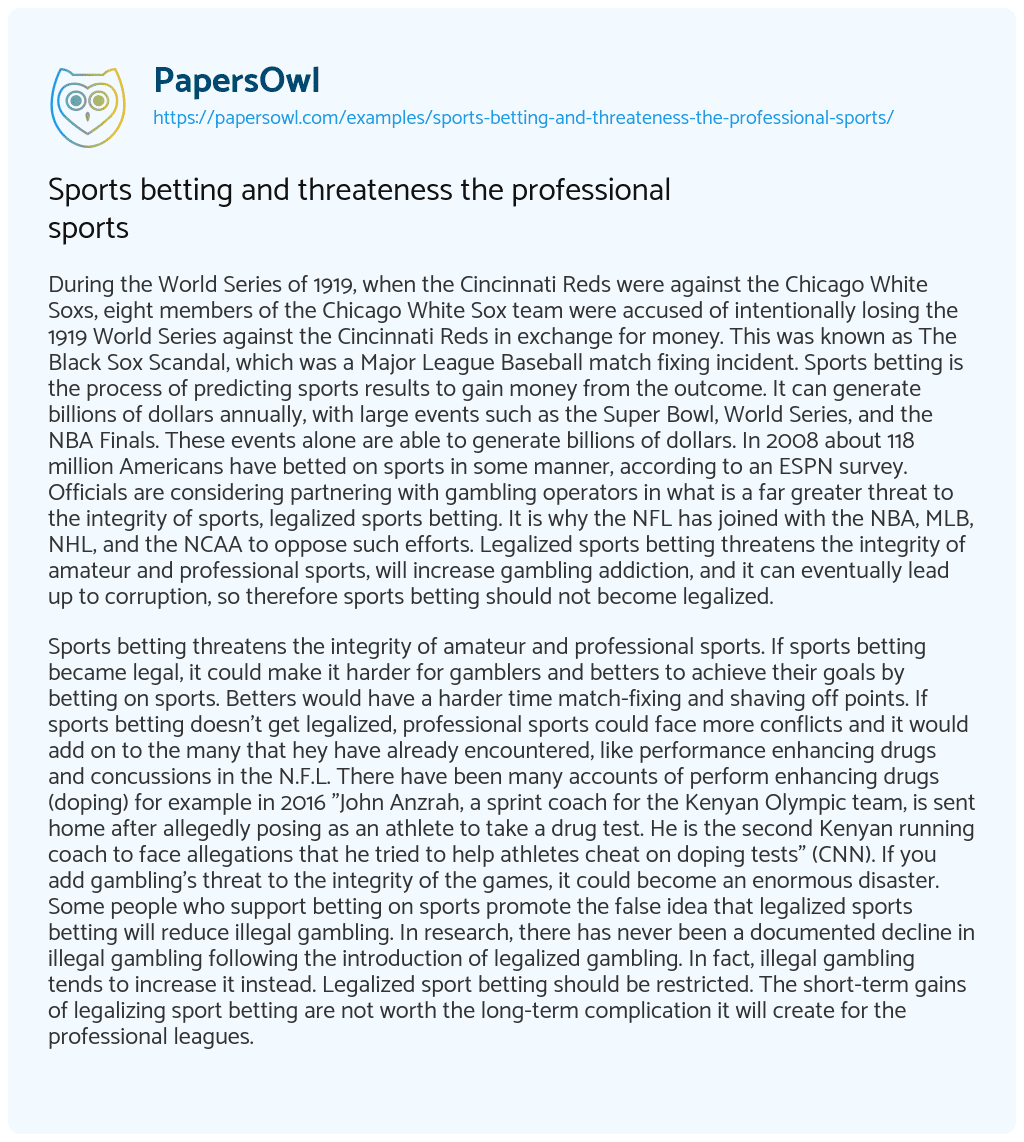 During the World Series of 1919, when the Cincinnati Reds were against the Chicago White Soxs, eight members of the Chicago White Sox team were accused of intentionally losing the 1919 World Series against the Cincinnati Reds in exchange for money. This was known as The Black Sox Scandal, which was a Major League Baseball match fixing incident. Sports betting is the process of predicting sports results to gain money from the outcome. It can generate billions of dollars annually, with large events such as the Super Bowl, World Series, and the NBA Finals. These events alone are able to generate billions of dollars. In 2008 about 118 million Americans have betted on sports in some manner, according to an ESPN survey. Officials are considering partnering with gambling operators in what is a far greater threat to the integrity of sports, legalized sports betting. It is why the NFL has joined with the NBA, MLB, NHL, and the NCAA to oppose such efforts. Legalized sports betting threatens the integrity of amateur and professional sports, will increase gambling addiction, and it can eventually lead up to corruption, so therefore sports betting should not become legalized.

Sports betting threatens the integrity of amateur and professional sports. If sports betting became legal, it could make it harder for gamblers and betters to achieve their goals by betting on sports. Betters would have a harder time match-fixing and shaving off points. If sports betting doesn’t get legalized, professional sports could face more conflicts and it would add on to the many that hey have already encountered, like performance enhancing drugs and concussions in the N.F.L. There have been many accounts of perform enhancing drugs (doping) for example in 2016 “John Anzrah, a sprint coach for the Kenyan Olympic team, is sent home after allegedly posing as an athlete to take a drug test. He is the second Kenyan running coach to face allegations that he tried to help athletes cheat on doping tests” (CNN). If you add gambling’s threat to the integrity of the games, it could become an enormous disaster. Some people who support betting on sports promote the false idea that legalized sports betting will reduce illegal gambling. In research, there has never been a documented decline in illegal gambling following the introduction of legalized gambling. In fact, illegal gambling tends to increase it instead. Legalized sport betting should be restricted. The short-term gains of legalizing sport betting are not worth the long-term complication it will create for the professional leagues.

Sports Betting in the United States

Issues with Sports Betting in the United States

Should Sports Betting be Legal Everywhere

Importance of Leadership in Sports