Shelley about Romanticism Versus the Enlightenment 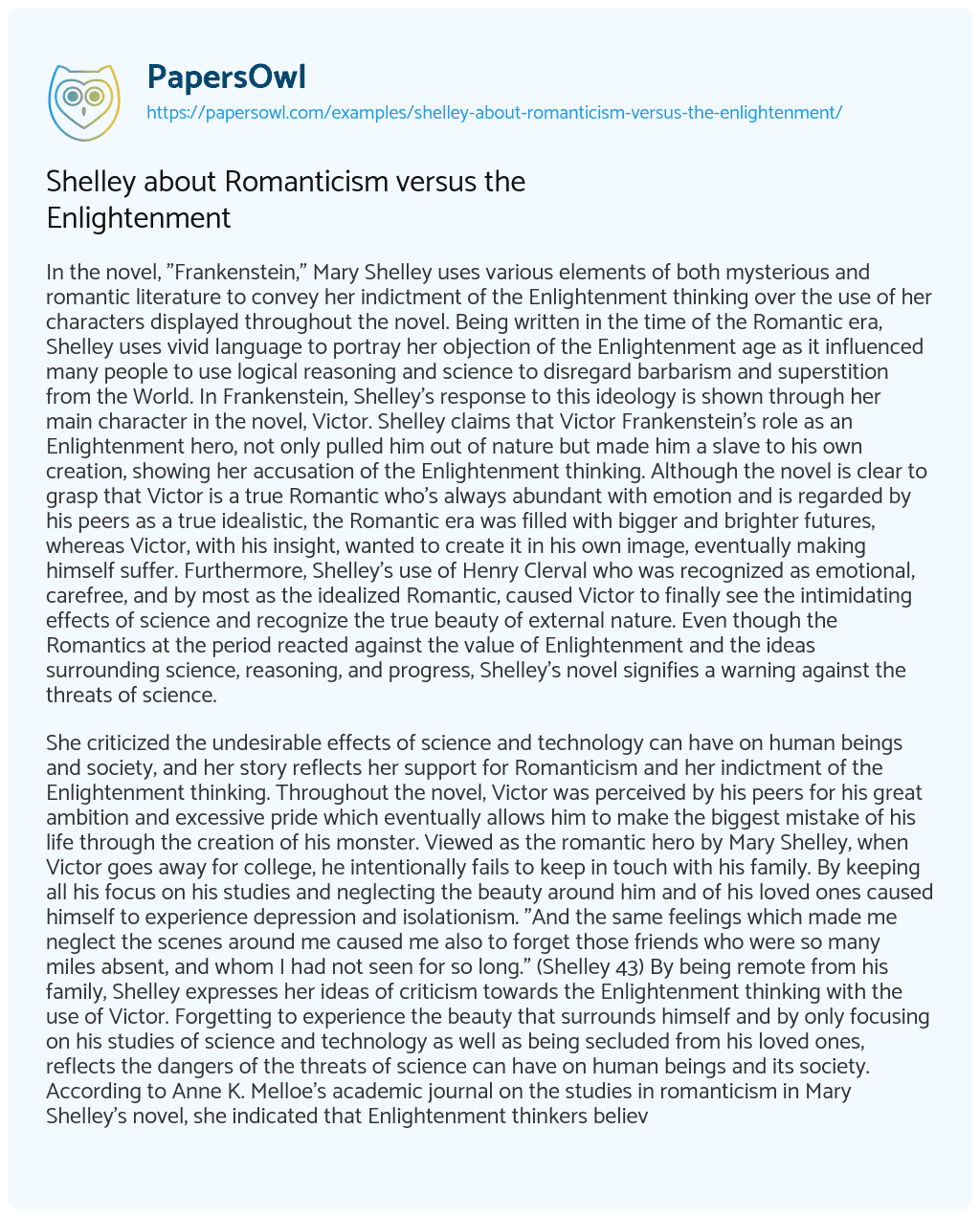 In the novel, “Frankenstein,” Mary Shelley uses various elements of both mysterious and romantic literature to convey her indictment of the Enlightenment thinking over the use of her characters displayed throughout the novel. Being written in the time of the Romantic era, Shelley uses vivid language to portray her objection of the Enlightenment age as it influenced many people to use logical reasoning and science to disregard barbarism and superstition from the World. In Frankenstein, Shelley’s response to this ideology is shown through her main character in the novel, Victor. Shelley claims that Victor Frankenstein’s role as an Enlightenment hero, not only pulled him out of nature but made him a slave to his own creation, showing her accusation of the Enlightenment thinking. Although the novel is clear to grasp that Victor is a true Romantic who’s always abundant with emotion and is regarded by his peers as a true idealistic, the Romantic era was filled with bigger and brighter futures, whereas Victor, with his insight, wanted to create it in his own image, eventually making himself suffer. Furthermore, Shelley’s use of Henry Clerval who was recognized as emotional, carefree, and by most as the idealized Romantic, caused Victor to finally see the intimidating effects of science and recognize the true beauty of external nature. Even though the Romantics at the period reacted against the value of Enlightenment and the ideas surrounding science, reasoning, and progress, Shelley’s novel signifies a warning against the threats of science.

She criticized the undesirable effects of science and technology can have on human beings and society, and her story reflects her support for Romanticism and her indictment of the Enlightenment thinking. Throughout the novel, Victor was perceived by his peers for his great ambition and excessive pride which eventually allows him to make the biggest mistake of his life through the creation of his monster. Viewed as the romantic hero by Mary Shelley, when Victor goes away for college, he intentionally fails to keep in touch with his family. By keeping all his focus on his studies and neglecting the beauty around him and of his loved ones caused himself to experience depression and isolationism. “And the same feelings which made me neglect the scenes around me caused me also to forget those friends who were so many miles absent, and whom I had not seen for so long.” (Shelley 43) By being remote from his family, Shelley expresses her ideas of criticism towards the Enlightenment thinking with the use of Victor. Forgetting to experience the beauty that surrounds himself and by only focusing on his studies of science and technology as well as being secluded from his loved ones, reflects the dangers of the threats of science can have on human beings and its society. According to Anne K. Melloe’s academic journal on the studies in romanticism in Mary Shelley’s novel, she indicated that Enlightenment thinkers believed very strongly in rationality and science and used scientific methods to improve society. Melloe made a contrast to this judgment as Romantics rejected the whole perception of reason and science. She stated in her article that, “Romantics viewed that a scientific worldview was cold and sterile.

They felt that science and material progress would rob people of their humanity, and that feelings and emotions are important sources of knowledge.” (Pg. 481) Portraying through what Melloe showed in her article, and with the actions of Victor by being isolated from his family conveys Shelley’s indictment of the Enlightenment thinking. By Victor leaving his loved ones created depression and on-going problems which he tried to run away from. Ignoring his feelings, emotions, and problems he was dealing with, but continuously concentrating on establishing his creation, began to hurt those he loved, and ultimately hurt himself. All in all, Shelley uses Victor’s character to express her criticism towards the Enlightenment thoughts, and the negative effects it can portray onto their everyday lives. Shelley displays towards her readers that science and the new age of technological advancement persuaded Victor to conquer nature by creating his own creature, but discovers that he cannot overcome nature, and lets it hurt those he loves. Shelley’s response to this act expresses her support for Romanticism and the role of emotion, feelings, and understanding of beautiful scenery is much more important. Romanticism in Mary Shelley’s novel is regularly explicit and suggests ideas of nature, domestic relationships, emotions, and rural life against the compulsive pursuit of science and technology, and the act of outsmarting. In this situation, Shelley expresses Victor’s scientific endeavor loses sight of his relationship he had with nature, himself, and with his loved ones. Victor states, “Misfortune had tainted my mind,” (Shelley 21) indicating that his attention on science and technology, which was revealed through his creation of the monster and the guilt that accompanies the monster is the main reason of his misfortune.

Victor continues by saying, “A human being in perfection ought always to preserve a calm and peaceful mind, and never to allow passion or transitory desire to disturb this tranquility… If the study to which you apply yourself tends to weaken your affections… then that study is certainly unlawful not benefitting the human mind.” (Shelley 33) In this statement, Shelley displays that one should consider living in a peaceful state, to conduct oneself in limitation, and one should be able to live simply. She shows how Victor recognizes his loss of himself throughout the procedure of his creation that established an unpleasant relationship to nature, a value for simplicity, and innocence. By signifying Victor as an enlightened man who saw ambition and genius as noble ideas, formed undesirable effects of emotion and problems on an individual, whereas Shelley’s support of emotional knowledge of the beauty of nature and the experience of attractive scenes gave inspiration. According to James O’Rourke’s article on Romanticism in Frankenstein and in English literature of the past, he explains, “Romantics saw ‘truth’ in the natural World and believed the danger in scientific progress lies in the potential for humanity to become detached from nature.” (O’Rourke 365) Shelley portrays for her readers that the dangers of science can play a huge part in the separation of an individual from ones’ self and from their loved ones.

In this state, Shelley shows that Enlightenment ideas represented by Victor, caused for his separation, not only from nature but with himself and with those who loved him dearly. At the time of Shelley’s novel, Romantics sought to demonstrate the theory that the natural World was in the course of being ruined by institutions of science since it conveyed too much knowledge upon humanity. Shelley is acknowledged as a Naturalists in the respect that she pays close consideration to details of the physical environments that surround her in a way which shaped her sensory experience. In, “Frankenstein,” Shelley reflects on the faults Victor notices after he truly understands the value nature represents, rather than what he imagined it to be. Victor’s close friend, Henry Clerval, is the total opposite of Victor. Henry is emotional, carefree, and idealized as a true Romantic throughout the novel. It wasn’t until Victor began to understand the damage of science has had on him the whole time until he lost his close companion, Henry, and as a result, started to appreciate the true beauty of external nature. “His wild and enthusiastic imagination was chastened by the sensibility of his heart. His soul overflowed with ardent affections, and his friendship was that devoted and wondrous nature that the world-minded teach us to look for only in the imagination. The scenery of external nature, which others regard only with admiration, he loved with adour.” (Shelley 107) This statement by Shelley signifies the comparison between Henry and Victor to be extremely diverse. Henry represented the idealized Romantic who had admiration for nature and a personal connection to wildlife which Victor never got to experience.

Although Henry’s pure principle of simplicity in life resulted into death by Victor’s monster, the monster’s actions and unsuitability with the natural World signifies Victor himself. Both are separated from external nature, as well as seek for human companionship, and Victor doesn’t notice this until the monster murders those he loved most. In Knellwolf’s article relating with the Romantic culture seen in Shelley’s novel, Knellwolf states, “Victor Frankenstein is a figure torn between the two kinds of visions expressed here, that no easy conclusions to be reached about the inherent values and dangers of his enterprise.” Knellwolf depicts the same similarities with Shelley’s ideologies on the issues of Enlightenment can have on individuals at the time. With Victor not distinguishing himself from his faults and with a self-centered character, deprived himself by the monster of companionship through the monster’s murders of those he loved most. All in all, in the novel, “Frankenstein,” Mary Shelley uses elements of Romantic literature to convey her indictment of the Enlightenment and the various negative effects it poses on individuals. Shown through the character of Victor, Shelley portrays how Victor’s self-centered acts and rational insights caused him to never really understand the true beauty of nature, and the importance of emotions can have.

Although, Victor is a true Romantic who’s frequently abundant with emotion and is regarded as a true idealistic amongst his peers, instead of accepting the wonders of external nature can have, and by simply trying to create it in his own image, caused Victor to be pulled out of nature, and become a slave to his own creation, displaying the effects of the Enlightenment thinking. Through the introduction of Henry Clerval, recognized as emotional and a person who had a strong connection with nature finally enabled Victor to understand all the experiences he has missed out on and wasn’t until he distinguished himself from his faults and careless acts until he noticed the loss of all his loved ones. In conclusion, Shelley’s novel signifies a warning against the threats of science. She criticized the undesirable effects of science and technology can have on human beings and society, shown throughout the story of Victor’s character. Her story rather reflects her abundant support for Romanticism as it can bring simplicity and brighter futures, and her indictment towards the Enlightenment thinking.

Shelley about Romanticism versus the Enlightenment. (2020, May 07). Retrieved from https://papersowl.com/examples/shelley-about-romanticism-versus-the-enlightenment/

Horror and Suspense with a Dash of Romanticism in “Frankenstein”