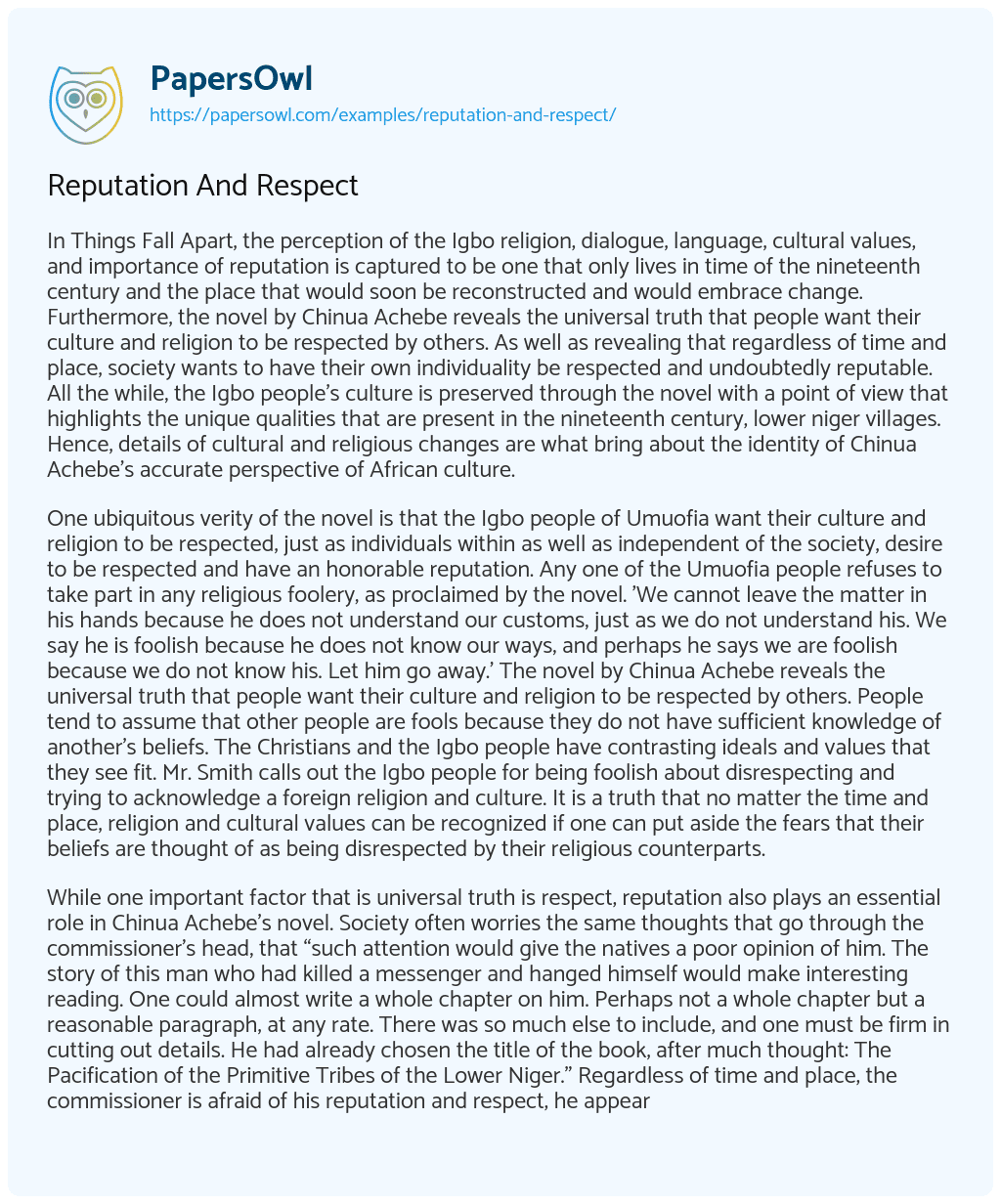 In Things Fall Apart, the perception of the Igbo religion, dialogue, language, cultural values, and importance of reputation is captured to be one that only lives in time of the nineteenth century and the place that would soon be reconstructed and would embrace change. Furthermore, the novel by Chinua Achebe reveals the universal truth that people want their culture and religion to be respected by others. As well as revealing that regardless of time and place, society wants to have their own individuality be respected and undoubtedly reputable. All the while, the Igbo people’s culture is preserved through the novel with a point of view that highlights the unique qualities that are present in the nineteenth century, lower niger villages. Hence, details of cultural and religious changes are what bring about the identity of Chinua Achebe’s accurate perspective of African culture.

One ubiquitous verity of the novel is that the Igbo people of Umuofia want their culture and religion to be respected, just as individuals within as well as independent of the society, desire to be respected and have an honorable reputation. Any one of the Umuofia people refuses to take part in any religious foolery, as proclaimed by the novel. ‘We cannot leave the matter in his hands because he does not understand our customs, just as we do not understand his. We say he is foolish because he does not know our ways, and perhaps he says we are foolish because we do not know his. Let him go away.’ The novel by Chinua Achebe reveals the universal truth that people want their culture and religion to be respected by others. People tend to assume that other people are fools because they do not have sufficient knowledge of another’s beliefs. The Christians and the Igbo people have contrasting ideals and values that they see fit. Mr. Smith calls out the Igbo people for being foolish about disrespecting and trying to acknowledge a foreign religion and culture. It is a truth that no matter the time and place, religion and cultural values can be recognized if one can put aside the fears that their beliefs are thought of as being disrespected by their religious counterparts.

While one important factor that is universal truth is respect, reputation also plays an essential role in Chinua Achebe’s novel. Society often worries the same thoughts that go through the commissioner’s head, that “such attention would give the natives a poor opinion of him. The story of this man who had killed a messenger and hanged himself would make interesting reading. One could almost write a whole chapter on him. Perhaps not a whole chapter but a reasonable paragraph, at any rate. There was so much else to include, and one must be firm in cutting out details. He had already chosen the title of the book, after much thought: The Pacification of the Primitive Tribes of the Lower Niger.” Regardless of time and place, the commissioner is afraid of his reputation and respect, he appears confident in his ability to adjust details and plotlines of his book. Everyone can identify with the commissioner’s desire to embellish the way he and his book are perceived by others. In this quote at the end of the book, the commissioner’s desire to express a specific plot line during his time in Umuofia is a similar want for people in today’s world to enhance their reputation in writing, their actions or on social media. Although the means of communication have changed somewhat, both generations, now and in the 19th century, are sure to cut out aspects of a story for their own good. This could be for multiple reasons, one being the commissioner longing to be accepted by others.

Through whichever way the universal truths are portrayed and enhanced, the unique point of view of Okonkwo and the supporting characters does not diminish the one-of-a-kind qualities of Umuofia that Achebe communicates. “Obierika was a man who thought about things. When the will of the goddess had been done, he sat down in his obi and mourned his friend’s calamity. Why should a man suffer so grievously for an offence he had committed inadvertently? But although he thought for a long time he found no answer. He was merely led into greater complexities. He remembered his wife’s twin children, whom he had thrown away. What crime had they committed?” Obierika is a man who thinks and ponders. He is a character who dedicates efforts towards having morality and kindness. He is dedicated to being a good friend and member of the community, even if he does not have as much influence as he desires. He desires the ability to help and mentor others, including Okonkwo. This quote reveals his qualities of thoughtfulness and how he balances intellect with compassion. It also revels in his point of view that brings about the distinctive values of the Igbo culture, where not all of the characters share the same qualities, even when all their moral compasses appear to be pointing north. Obierika is a mentor, he is a man that recognizes and questions things Okonkwo never could.

The thoughts of Ikemefuna’s death ravage through Okonkwo’s brain, paralysing his everyday life. “Okonkwo did not taste any food for two days after the death of Ikemefuna. He drank palm-wine from morning till night, and his eyes were red and fierce like the eyes of a rat when it was caught by the tail and dashed against the floor. He called his son, Nwoye, to sit with him in his obi. But the boy was afraid of him and slipped out of the hut as soon as he noticed him dozing.” Ikemefuna’s death has a great impact on Okonkwo and the people around him. Okonkwo refuses to live a daily life, in turn affecting the thoughts and feelings of his son, Nwoye. Because of Okonkwo’s inability to cope with his emotions, he causes stress and worry on the part of Nwoye, who now fears his father. Okonkwo is not used to dealing with tragedy and grief and unknowingly sacrifices a good relationship with his son, by acting with anger and distress from Ikemefuna’s death. We are beginning to see what Okonkwo’s weaknesses are. This is in contrast with Obierika’s character, the point of view shifting allows the readers to see the idiosyncratic lifestyle of the African village. It is a novel where the clashing points of view are what make the culture unable to be replicated in a different time and place.

While there is a certain peculiarity due to the time and place of Chinua Achebe’s novel, there are also universal truths that are sought out of the cultural and religious values of the Igbo society. There are complexities that the author strives to help the readers understand through the point of view and the simpler ideals that most everyone can agree with. Obierika and Okonkwo’s contrasting methods of thought and action are crucial in bringing together the unique nineteenth century African village of Umuofia, while also revealing the universal truths of reputation and respect. The readers of the novel are given the immediate opportunity to learn about perspective, reputation, respect of a foreign culture and religion, and methods for dealing with conflict. The ideals and truths presented in Things Fall Apart convey the importance of the character’s ability to deal with conflict. It is necessary to realize that reputation and respect will always be desired, and the way to overcome acting with immorality is to get perspective on the issues that will always be present in our world, no matter time and place. Even though the conflict will vary, and point of view will change, the road to respect and an honest reputation is consistent. Chinua Achebe leads the readers down many paths, ultimately giving the readers the key to preventing a downfall similar to that of Okonkwo.

The Perception of the Igbo Religion in Things Fall Apart

White Missionaries and the Igbo People