Queer Youth, Homelessness, and the Failure of the Foster Care System 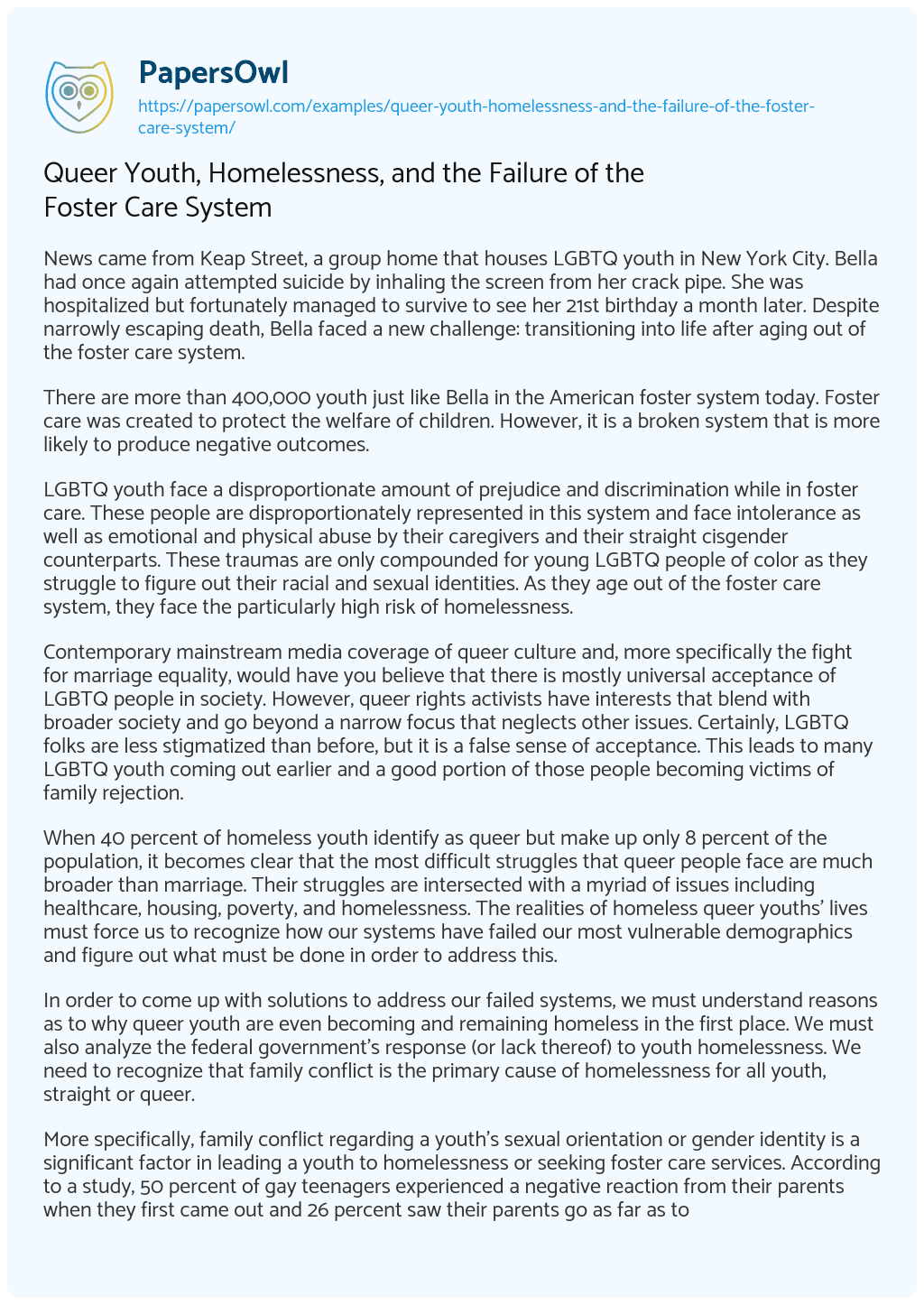 News came from Keap Street, a group home that houses LGBTQ youth in New York City. Bella had once again attempted suicide by inhaling the screen from her crack pipe. She was hospitalized but fortunately managed to survive to see her 21st birthday a month later. Despite narrowly escaping death, Bella faced a new challenge: transitioning into life after aging out of the foster care system.

There are more than 400,000 youth just like Bella in the American foster system today. Foster care was created to protect the welfare of children. However, it is a broken system that is more likely to produce negative outcomes.

LGBTQ youth face a disproportionate amount of prejudice and discrimination while in foster care. These people are disproportionately represented in this system and face intolerance as well as emotional and physical abuse by their caregivers and their straight cisgender counterparts. These traumas are only compounded for young LGBTQ people of color as they struggle to figure out their racial and sexual identities. As they age out of the foster care system, they face the particularly high risk of homelessness.

Contemporary mainstream media coverage of queer culture and, more specifically the fight for marriage equality, would have you believe that there is mostly universal acceptance of LGBTQ people in society. However, queer rights activists have interests that blend with broader society and go beyond a narrow focus that neglects other issues. Certainly, LGBTQ folks are less stigmatized than before, but it is a false sense of acceptance. This leads to many LGBTQ youth coming out earlier and a good portion of those people becoming victims of family rejection.

When 40 percent of homeless youth identify as queer but make up only 8 percent of the population, it becomes clear that the most difficult struggles that queer people face are much broader than marriage. Their struggles are intersected with a myriad of issues including healthcare, housing, poverty, and homelessness. The realities of homeless queer youths’ lives must force us to recognize how our systems have failed our most vulnerable demographics and figure out what must be done in order to address this.

In order to come up with solutions to address our failed systems, we must understand reasons as to why queer youth are even becoming and remaining homeless in the first place. We must also analyze the federal government’s response (or lack thereof) to youth homelessness. We need to recognize that family conflict is the primary cause of homelessness for all youth, straight or queer.

More specifically, family conflict regarding a youth’s sexual orientation or gender identity is a significant factor in leading a youth to homelessness or seeking foster care services. According to a study, 50 percent of gay teenagers experienced a negative reaction from their parents when they first came out and 26 percent saw their parents go as far as to kick them out of their homes . Another study showed that 46 percent of queer youth that came out ran away from home due to family rejection of their sexual orientation or gender identity (Newton, 221). It was also found that more than one-third of all youth who are homeless or in foster care were physically assaulted when they came out (Ray, 52).

In the case of the youth in foster care, this will often lead to the assaulted youth running away from the shelter and ending up homeless on the streets. We must also consider the effect that being forced to leave home has on the mental health of these youths. Queer youth are particularly vulnerable to mental health deterioration in the form of depression, withdrawn behavior, and even delinquency. According to the US Department of Health and Human Services, the fact that queer youth live in “a society that discriminates against and stigmatizes homosexuals” makes them more vulnerable to mental health deterioration compared to their cisgender, heterosexual counterparts. As a result, this vulnerability is only compounded for queer youth that are homeless.

This combination of familial rejection and physical and emotional trauma can lead to alcohol and drug abuse. In Minnesota, five separate statewide studies found that between 10 and 20 percent of homeless youth self-identify as chemically dependent. These risks are only increased homeless queer youth.

All homeless youth are especially vulnerable to engaging in risky behavior in order to meet their basic needs such as food and shelter. For example, survival sex – or exchanging sex for vital needs such as money, food, clothing, shelter, or even drugs – is often a last resort for homeless queer youth. According to a study of homeless youth in Canada, those who identify as queer were three times more likely to participate in survival sex than their cisgender, heterosexual counterparts.

According to a story from Rolling Stone, transgender women Justice and Sophie would spend nights during the teenage years in New York’s West Village searching for men who would provide them with shelter and cash in exchange for sex. Prior to becoming homeless, Sophie lived with her father and grandmother, both of whom beat her and often locked her out of the house. Sophie noted that her father often beat her with his belt and punched her in the face while calling her “faggot”. As a result, she ended up on the streets at 16, attending school when it was possible but mostly spent time struggling to find food and shelter (Murray).

Sophie’s friend Justice became homeless after her father ended up in jail and her mother lost custody of her due to excessive partying. Justice briefly stayed at a men’s shelter but became a victim to repeated rape attempts by one of the shelter’s residents and staff members (Murray). Justice and Sophie were just two of hundreds of thousands of queer youths that have been disconnected from social services and forced to sleep on many different couches a month, as they exchanged sex for shelter and money. Transgender youth are disproportionately represented in the homeless population and make up for nearly 40 percent of all homeless youth (Lolai).

Reports indicate that one in five transgender individuals need or are at risk of needing homeless shelter assistance (Ray, 54). However, when there are stories like Justice’s involving the physical and emotional abuse of queer youth once they are in shelters, how is it a surprise that many of them end up in the streets instead? Queer youth face this constant threat of being victimized. According to the National Runaway Switchboard, queer youth are seven times more likely to be victims of a crime than their cisgender, heterosexual counterparts (Ray, 53).

The victimization of homeless queer youth like Justice and Sophie has shown our country’s failure to properly develop a national estimate of homelessness among American youth. As a result, what little data is collected cannot lead to appropriate services being provided. This also shows a failure on the part of social services to do enough to protect queer youth.

As can be seen by the previous stories and statistics, most existing homeless shelters and other social services are not doing nearly enough to provide safe and effective services to homeless queer youth. In New York City alone, more than 60 percent of beds for homeless youth are provided by Covenant House, a facility that has seen reports come out from queer youth claiming that they had been threatened and abused by both staff and other patients due to their sexual orientation or gender identity. In another case, a Michigan residential placement facility forced queer teens, and those suspected of being queer, to wear orange jumpsuits akin to prisoner wear so that they could more easily differentiate them from their cisgender, heterosexual counterparts.

The Home for Little Wanderers in Massachusetts also had reports of queer youths claiming to have been kicked out of other social services prior to coming to them (Ray, 57). The abuse that queer youth face in shelters is a testament to the failure of state and federal agencies to take the necessary steps needed to protect queer youth that seek access to social services as well as to mandate that everyone that works in child welfare be made to take some form of LGBTQ awareness training.

I will conclude this paper with some policy recommendations that I believe can at least limit and control this epidemic. It should be noted that these are obviously not permanent cures for homelessness and that this list is non-exhaustive. First and foremost, it is imperative that the federal government authorizes and properly allocates an appropriate amount of federal funds towards social programs that specifically targets queer youth. Additionally, we must recognize the intersectionality between the struggles of homeless queer youth and our own as middle working-class people. With that said, I believe that we must advocate for raising the state and federal minimum wages to at least $15 an hour.

We must also invest in employment social enterprises, specifically those that employ people in marginalized demographics, including homeless queer youth. We need to hear the stories of homeless queer youths that have been abused by their caretakers while in the foster care system and call for the complete repeal of any and all existing laws across the country that prevent single and partnered queer people from becoming adoptive or foster parents. By doing this, displaced queer youth can feel less apprehensive and less likely to experience abuse for their sexual orientation and gender identity.

Once implemented, I believe that these policy recommendations will help not only homeless queer youth, but all youth in general that have found themselves abandoned by their families or otherwise forced to leave their homes. No matter what one’s sexual orientation or gender identity is, everyone deserves to live and grow in a safe and nurturing environment. By doing this, we can do the morally right thing for a marginalized demographic as well as fully invest in our society as a whole and our country’s future.

Queer Youth, Homelessness, and the Failure of the Foster Care System. (2021, Mar 16). Retrieved from https://papersowl.com/examples/queer-youth-homelessness-and-the-failure-of-the-foster-care-system/

Youth Homelessness in the United States