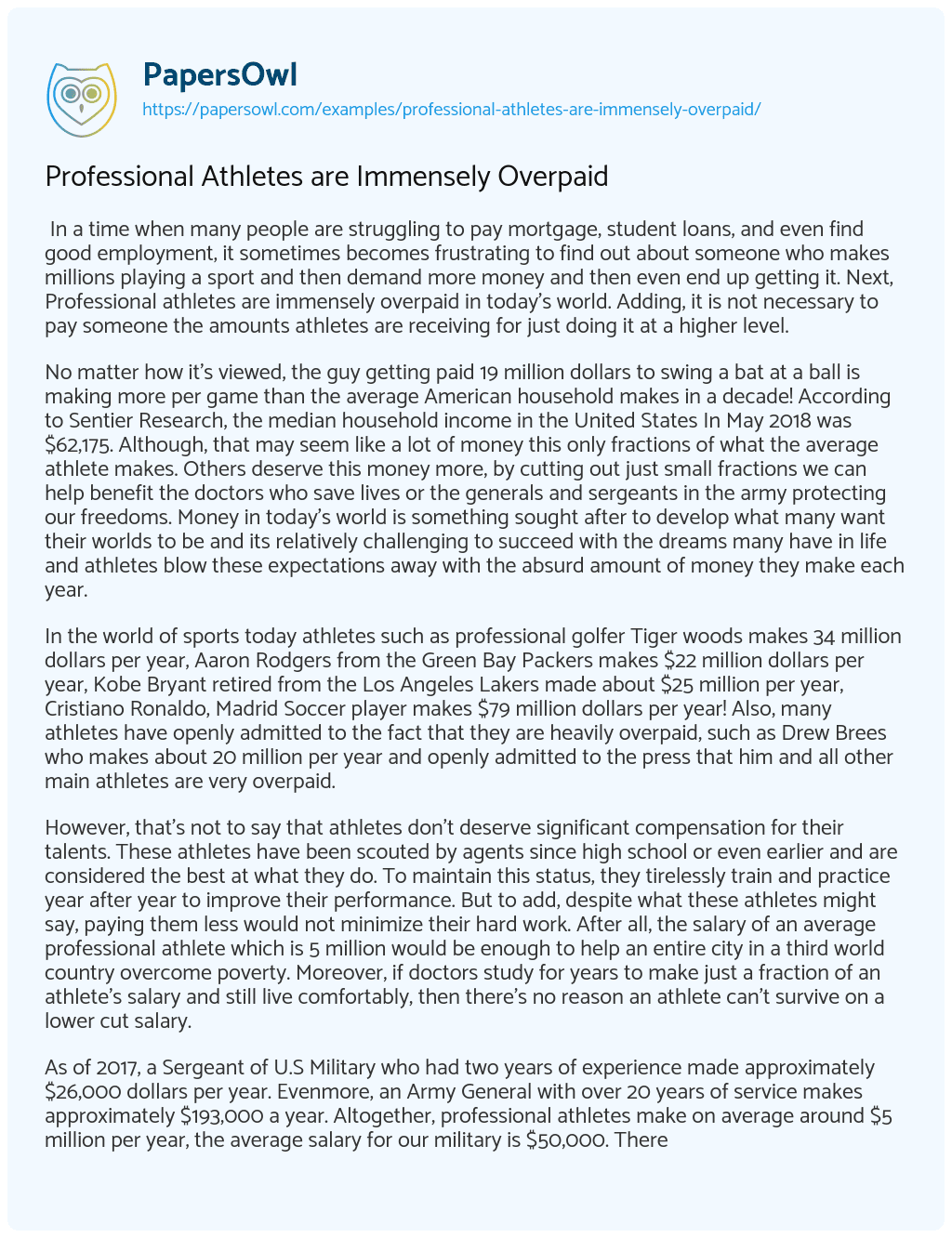 In a time when many people are struggling to pay mortgage, student loans, and even find good employment, it sometimes becomes frustrating to find out about someone who makes millions playing a sport and then demand more money and then even end up getting it. Next, Professional athletes are immensely overpaid in today’s world. Adding, it is not necessary to pay someone the amounts athletes are receiving for just doing it at a higher level.

No matter how it’s viewed, the guy getting paid 19 million dollars to swing a bat at a ball is making more per game than the average American household makes in a decade! According to Sentier Research, the median household income in the United States In May 2018 was $62,175. Although, that may seem like a lot of money this only fractions of what the average athlete makes. Others deserve this money more, by cutting out just small fractions we can help benefit the doctors who save lives or the generals and sergeants in the army protecting our freedoms. Money in today’s world is something sought after to develop what many want their worlds to be and its relatively challenging to succeed with the dreams many have in life and athletes blow these expectations away with the absurd amount of money they make each year.

However, that’s not to say that athletes don’t deserve significant compensation for their talents. These athletes have been scouted by agents since high school or even earlier and are considered the best at what they do. To maintain this status, they tirelessly train and practice year after year to improve their performance. But to add, despite what these athletes might say, paying them less would not minimize their hard work. After all, the salary of an average professional athlete which is 5 million would be enough to help an entire city in a third world country overcome poverty. Moreover, if doctors study for years to make just a fraction of an athlete’s salary and still live comfortably, then there’s no reason an athlete can’t survive on a lower cut salary.

As of 2017, a Sergeant of U.S Military who had two years of experience made approximately $26,000 dollars per year. Evenmore, an Army General with over 20 years of service makes approximately $193,000 a year. Altogether, professional athletes make on average around $5 million per year, the average salary for our military is $50,000. There is something wrong with that immense difference. Military personnel sacrifice their lives to protect this country, and not to say as well, technically these men and women serving our country give these athletes the chance to even play their sports by fighting for their freedoms. Although, reaching the professional level is unbelievably challenging and takes time and huge amounts dedication. However, the likelyhood to even have a chance at competing in a sport for money professionally is a privilege that is protected by the men and women of our armed forces and an athlete’s skills and abilities would be useless without that protection and freedom.

The world of sports often correlates its competition to war. The NFL is a “combat zone,” some say and “we are going to war against that team,” when in truth we have Americans fighting for freedom and survival in a real combat zone every day. All in all, athletes are immensely overpaid, while our military personnel remains disgustingly underpaid. Deployed soldiers in Afghanistan earn as little as $3,000 per month, compared to a professional athlete’s average $500,000 per month. These are people who are fighting for our nation to give us the rights and freedom that we have and they are only being paid tiny fractions of many athletes salaries.

Athletes’ salaries are really not to be envied, they shouldn’t be making such ridiculous amounts of money. Professional athletes are immensely overpaid in today’s world. By working with our dollars and viewing time, we can help reallocate the funds that would otherwise go to athletes’ salaries to better uses. Doctors who are people that save several lives daily, or people enlisted in the army who risk their lives everyday on and off the job to protect our freedoms and rights deserve these higher wages more than anyone else.

College Athletes should not be Paid

A Worth of the Athletes in the National Collegiate Athletic Association

Student Athletes’ Money in Addition to their Scholarships