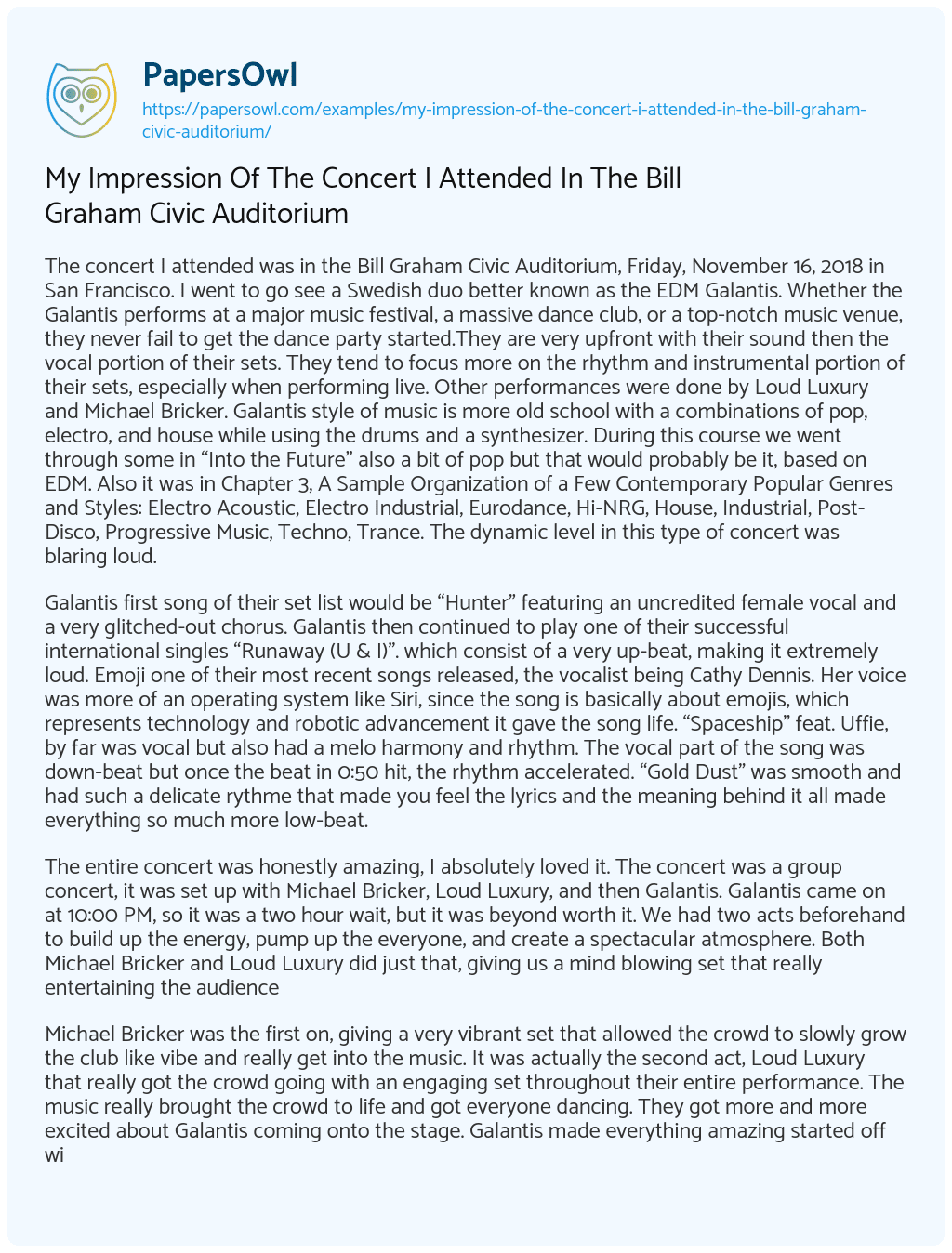 The concert I attended was in the Bill Graham Civic Auditorium, Friday, November 16, 2018 in San Francisco. I went to go see a Swedish duo better known as the EDM Galantis. Whether the Galantis performs at a major music festival, a massive dance club, or a top-notch music venue, they never fail to get the dance party started.They are very upfront with their sound then the vocal portion of their sets. They tend to focus more on the rhythm and instrumental portion of their sets, especially when performing live. Other performances were done by Loud Luxury and Michael Bricker. Galantis style of music is more old school with a combinations of pop, electro, and house while using the drums and a synthesizer. During this course we went through some in “Into the Future” also a bit of pop but that would probably be it, based on EDM. Also it was in Chapter 3, A Sample Organization of a Few Contemporary Popular Genres and Styles: Electro Acoustic, Electro Industrial, Eurodance, Hi-NRG, House, Industrial, Post-Disco, Progressive Music, Techno, Trance. The dynamic level in this type of concert was blaring loud.

Galantis first song of their set list would be “Hunter” featuring an uncredited female vocal and a very glitched-out chorus. Galantis then continued to play one of their successful international singles “Runaway (U & I)”. which consist of a very up-beat, making it extremely loud. Emoji one of their most recent songs released, the vocalist being Cathy Dennis. Her voice was more of an operating system like Siri, since the song is basically about emojis, which represents technology and robotic advancement it gave the song life. “Spaceship” feat. Uffie, by far was vocal but also had a melo harmony and rhythm. The vocal part of the song was down-beat but once the beat in 0:50 hit, the rhythm accelerated. “Gold Dust” was smooth and had such a delicate rythme that made you feel the lyrics and the meaning behind it all made everything so much more low-beat.

The entire concert was honestly amazing, I absolutely loved it. The concert was a group concert, it was set up with Michael Bricker, Loud Luxury, and then Galantis. Galantis came on at 10:00 PM, so it was a two hour wait, but it was beyond worth it. We had two acts beforehand to build up the energy, pump up the everyone, and create a spectacular atmosphere. Both Michael Bricker and Loud Luxury did just that, giving us a mind blowing set that really entertaining the audience

Michael Bricker was the first on, giving a very vibrant set that allowed the crowd to slowly grow the club like vibe and really get into the music. It was actually the second act, Loud Luxury that really got the crowd going with an engaging set throughout their entire performance. The music really brought the crowd to life and got everyone dancing. They got more and more excited about Galantis coming onto the stage. Galantis made everything amazing started off with the beating of the drums for about 7 minutes within the start of their set. Whether you were standing in the crowd; standing at the back with the free space; or up in the seats, like we were. The view was fantastic weather you were on top or at the bottom, well if you were on the bottom you had bodies everywhere so maybe not that amazing but you had the chance to be closer. Being on the top gave you a great view of the entire stage and Galantis’ performance. I honestly loved their entire set list, it was very much enjoyable. The strongest points of the music would be the rhythm and beat.

The Bill Graham Civic Auditorium itself helps out the entire concert become much more intense. It allows the mood of the concert become more vibrant and enjoyable, like most concert held in other auditoriums Galantis made great use of the light show and pyrotechnics, we could feel the fire, even though we were quite far away. The release of the paper streams and the confetti totally made it a great night. The graphics progressed throughout the night into much complex ones. They were were bold and fast, I was extremely impressed with the shows graphics.

My Impression Of The Concert I Attended In The Bill Graham Civic Auditorium. (2022, Jun 20). Retrieved from https://papersowl.com/examples/my-impression-of-the-concert-i-attended-in-the-bill-graham-civic-auditorium/