Love for Childhood Innocence in the Catcher in the Rye 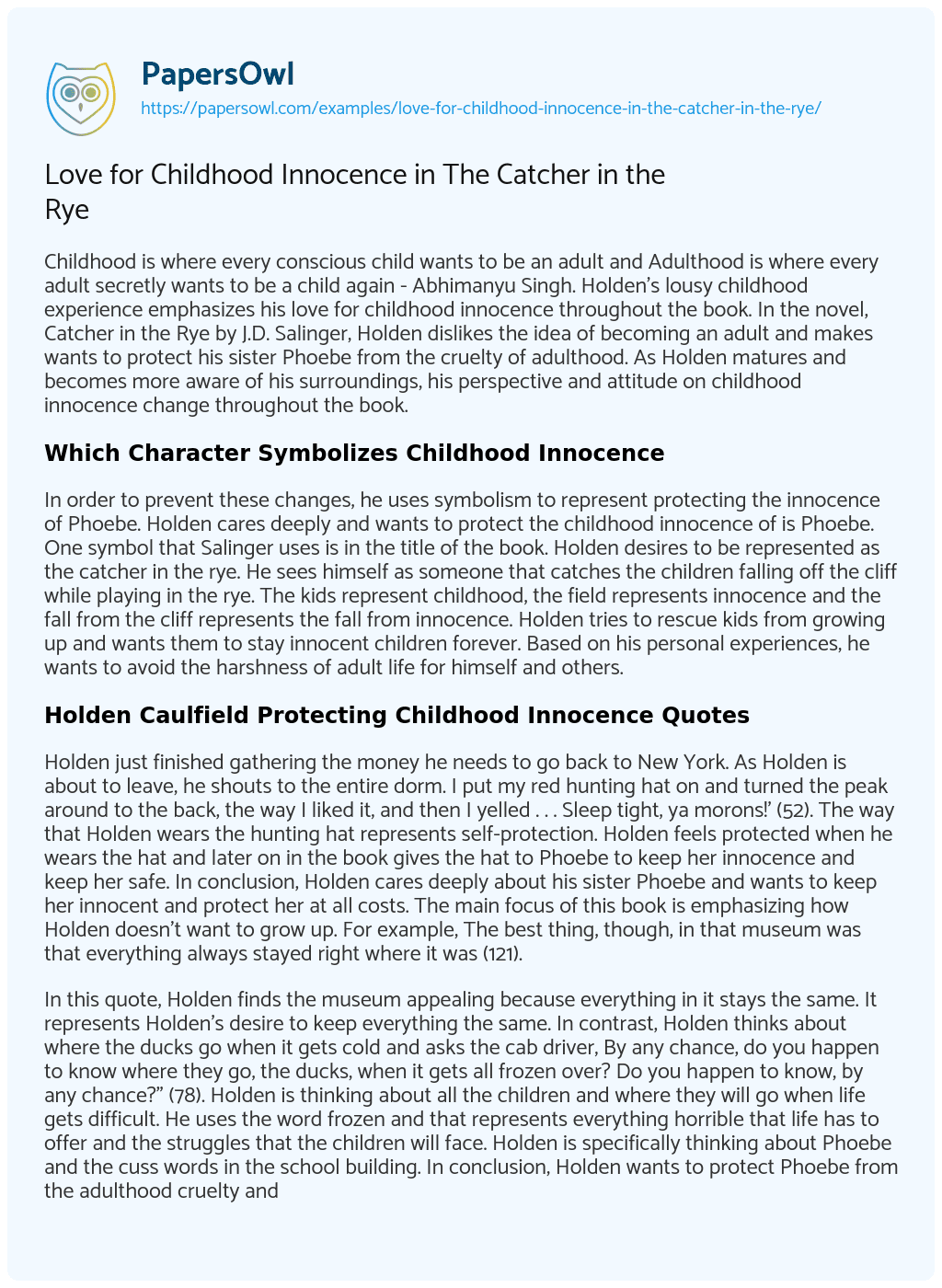 Childhood is where every conscious child wants to be an adult and Adulthood is where every adult secretly wants to be a child again – Abhimanyu Singh. Holden’s lousy childhood experience emphasizes his love for childhood innocence throughout the book. In the novel, Catcher in the Rye by J.D. Salinger, Holden dislikes the idea of becoming an adult and makes wants to protect his sister Phoebe from the cruelty of adulthood. As Holden matures and becomes more aware of his surroundings, his perspective and attitude on childhood innocence change throughout the book.

In order to prevent these changes, he uses symbolism to represent protecting the innocence of Phoebe. Holden cares deeply and wants to protect the childhood innocence of is Phoebe. One symbol that Salinger uses is in the title of the book. Holden desires to be represented as the catcher in the rye. He sees himself as someone that catches the children falling off the cliff while playing in the rye. The kids represent childhood, the field represents innocence and the fall from the cliff represents the fall from innocence. Holden tries to rescue kids from growing up and wants them to stay innocent children forever. Based on his personal experiences, he wants to avoid the harshness of adult life for himself and others.

Holden just finished gathering the money he needs to go back to New York. As Holden is about to leave, he shouts to the entire dorm. I put my red hunting hat on and turned the peak around to the back, the way I liked it, and then I yelled . . . Sleep tight, ya morons!’ (52). The way that Holden wears the hunting hat represents self-protection. Holden feels protected when he wears the hat and later on in the book gives the hat to Phoebe to keep her innocence and keep her safe. In conclusion, Holden cares deeply about his sister Phoebe and wants to keep her innocent and protect her at all costs. The main focus of this book is emphasizing how Holden doesn’t want to grow up. For example, The best thing, though, in that museum was that everything always stayed right where it was (121).

In this quote, Holden finds the museum appealing because everything in it stays the same. It represents Holden’s desire to keep everything the same. In contrast, Holden thinks about where the ducks go when it gets cold and asks the cab driver, By any chance, do you happen to know where they go, the ducks, when it gets all frozen over? Do you happen to know, by any chance?” (78). Holden is thinking about all the children and where they will go when life gets difficult. He uses the word frozen and that represents everything horrible that life has to offer and the struggles that the children will face. Holden is specifically thinking about Phoebe and the cuss words in the school building. In conclusion, Holden wants to protect Phoebe from the adulthood cruelty and all the horrible atrocities that she will have to experience someday that he can’t always protect her from. Holden’s loss of his innocence impacts how much he cares for his sister’s innocence.

Protection of Innocence in Catcher in the Rye

For example, Holden’s brother Allie had died several years earlier and his death made a lasting impression on Holden. My brother Allie had this left-handed fielders mitt he had poems were written all over the fingers (49). The quote represents innocence and goodwill. The death of Allie left a huge impact on Holden causing him to lose his innocence earlier on because he had to experience something so tragic so early on in life. Because of this horrible event, Holden has to step into the older brother role and look out for his younger sister Phoebe. Holden finds a record for Phoebe but ends up breaking the record and the pieces are scattered. Gimme the pieces,’ she said. I’m saving them’ (212).

This is ironic because Holden was so disappointed in the broken pieces that his mental health is not where it is supposed to be but he had Phoebe to look after him and tell him everything is going to be okay. Keeping all the pieces symbolize how Phoebe is easygoing and caring and how she gives support for Holden. In conclusion, Holden’s mental health and Phoebe’s support keep each other innocent. After analyzing the symbolism of how Holden protects Phoebe’s innocence; it clearly shows that Holden has a fear of adulthood. Holden related everything back to Phoebe. The hunting hat was able to give Phoebe protection. The ducks show that the future is still very unclear when times get tough.

Phoebe’s record shows how Holden’s innocence needs to be protected from adult cruelty. Salinger’s statement of society is children need their innocence protected. These symbols reflect the statement because without childhood innocence, mental health problems can rapidly increase and the child’s outlook on the world is completely different. Today, children start losing their innocence at age ten and some people even say that childhood is over at age twelve. The world throws curve balls at us all the time and sometimes life doesn’t go our way. In the end, innocence is one of the most important traits of life and although being aware of surroundings is important, it is staying close with the people that you trust most that will protect you. Holden needs Phoebe and Phoebe needs Holden and their bond keeps both of them innocent.

Love for Childhood Innocence in The Catcher in the Rye. (2019, Dec 09). Retrieved from https://papersowl.com/examples/love-for-childhood-innocence-in-the-catcher-in-the-rye/

Childhood and Adulthood in the Catcher in the Rye

The Fear of Adulthood in Catcher in the Rye, a Novel by J. D. Salinger

Adolescents in the Catcher in the Rye

Catcher in the Rye Censorship

Holden’s Role of being the Catcher in the Rye