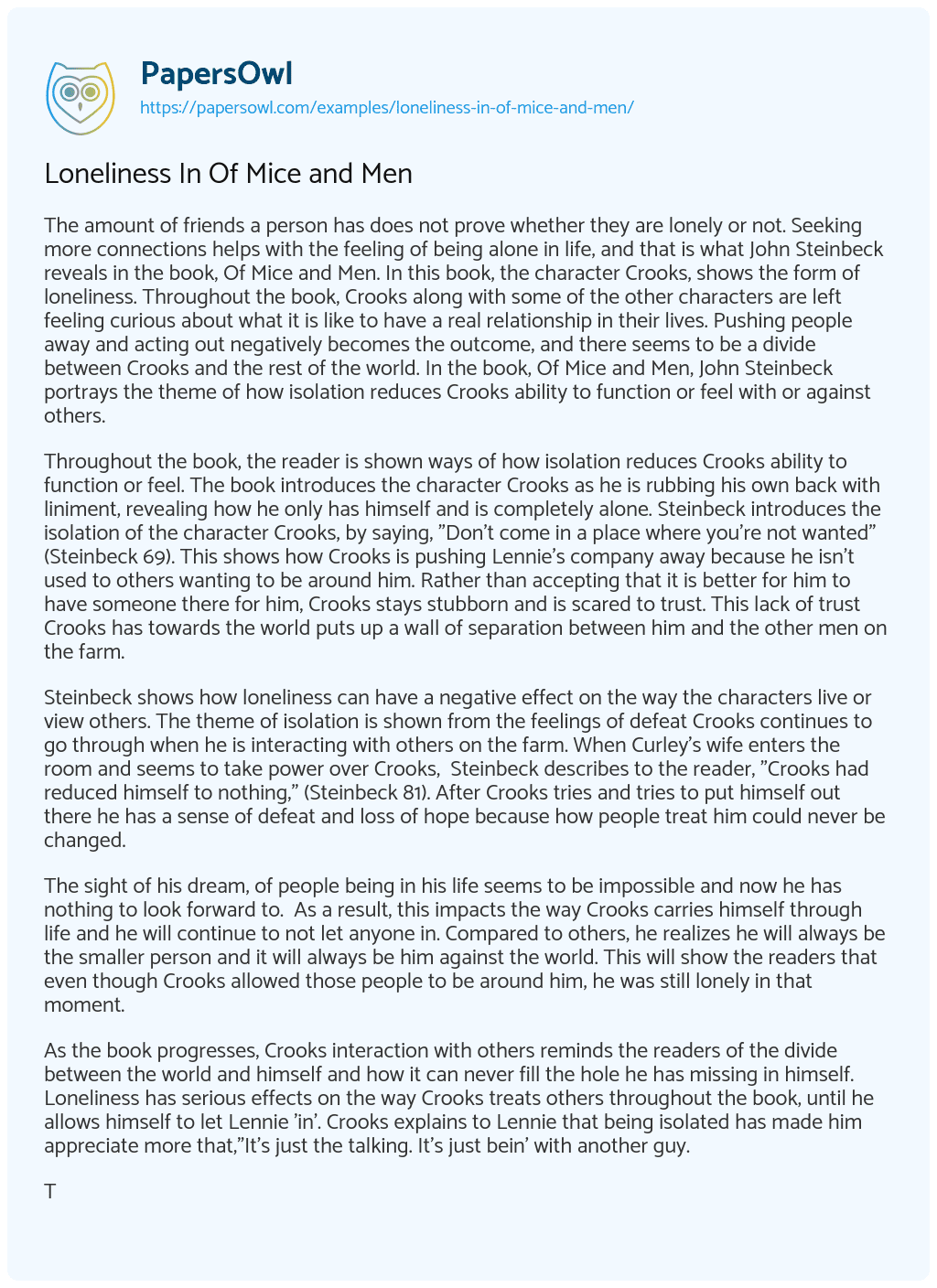 The amount of friends a person has does not prove whether they are lonely or not. Seeking more connections helps with the feeling of being alone in life, and that is what John Steinbeck reveals in the book, Of Mice and Men. In this book, the character Crooks, shows the form of loneliness. Throughout the book, Crooks along with some of the other characters are left feeling curious about what it is like to have a real relationship in their lives. Pushing people away and acting out negatively becomes the outcome, and there seems to be a divide between Crooks and the rest of the world. In the book, Of Mice and Men, John Steinbeck portrays the theme of how isolation reduces Crooks ability to function or feel with or against others.

Throughout the book, the reader is shown ways of how isolation reduces Crooks ability to function or feel. The book introduces the character Crooks as he is rubbing his own back with liniment, revealing how he only has himself and is completely alone. Steinbeck introduces the isolation of the character Crooks, by saying, “Don’t come in a place where you’re not wanted” (Steinbeck 69). This shows how Crooks is pushing Lennie’s company away because he isn’t used to others wanting to be around him. Rather than accepting that it is better for him to have someone there for him, Crooks stays stubborn and is scared to trust. This lack of trust Crooks has towards the world puts up a wall of separation between him and the other men on the farm.

Steinbeck shows how loneliness can have a negative effect on the way the characters live or view others. The theme of isolation is shown from the feelings of defeat Crooks continues to go through when he is interacting with others on the farm. When Curley’s wife enters the room and seems to take power over Crooks,  Steinbeck describes to the reader, “Crooks had reduced himself to nothing,” (Steinbeck 81). After Crooks tries and tries to put himself out there he has a sense of defeat and loss of hope because how people treat him could never be changed.

The sight of his dream, of people being in his life seems to be impossible and now he has nothing to look forward to.  As a result, this impacts the way Crooks carries himself through life and he will continue to not let anyone in. Compared to others, he realizes he will always be the smaller person and it will always be him against the world. This will show the readers that even though Crooks allowed those people to be around him, he was still lonely in that moment.

As the book progresses, Crooks interaction with others reminds the readers of the divide between the world and himself and how it can never fill the hole he has missing in himself. Loneliness has serious effects on the way Crooks treats others throughout the book, until he allows himself to let Lennie ‘in’. Crooks explains to Lennie that being isolated has made him appreciate more that,”It’s just the talking. It’s just bein’ with another guy.

That’s all.” (Steinbeck 71). Although Steinbeck portrays Crooks to be stubborn and cold-hearted, he lets the soft spot Crooks has deep down come out in. The author shows the readers that Crooks is damaged in a way that can never be changed no matter how much he hates being lonely. It feels like he is stuck in a way, and it’ll always just be him facing the world. Although this clear divide between him and others, there will still always be this interest in him to seek friendships and fill that hole of emptiness within himself.

Isolation reduces the characters ability to function or feel with others throughout the book. Being alone is hard on a person, especially Crooks and makes him push away any social interactions, revealing his lack of trust. Knowing the way he is treated will never change, a sense of defeat takes over him. This reminds the readers that the dream of having a relationship almost seems impossible and it will always be Crooks against the world. Steinbeck reinforces the theme that being lonely causes a person to become negative towards others because of the curiosity of having a real relationship. Coming to the realization that his future will be nothing more than dreaming about a different reality while isolated from the rest.

Loneliness In Of Mice and Men. (2020, Jan 31). Retrieved from https://papersowl.com/examples/loneliness-in-of-mice-and-men/

Loneliness and Bitterness both