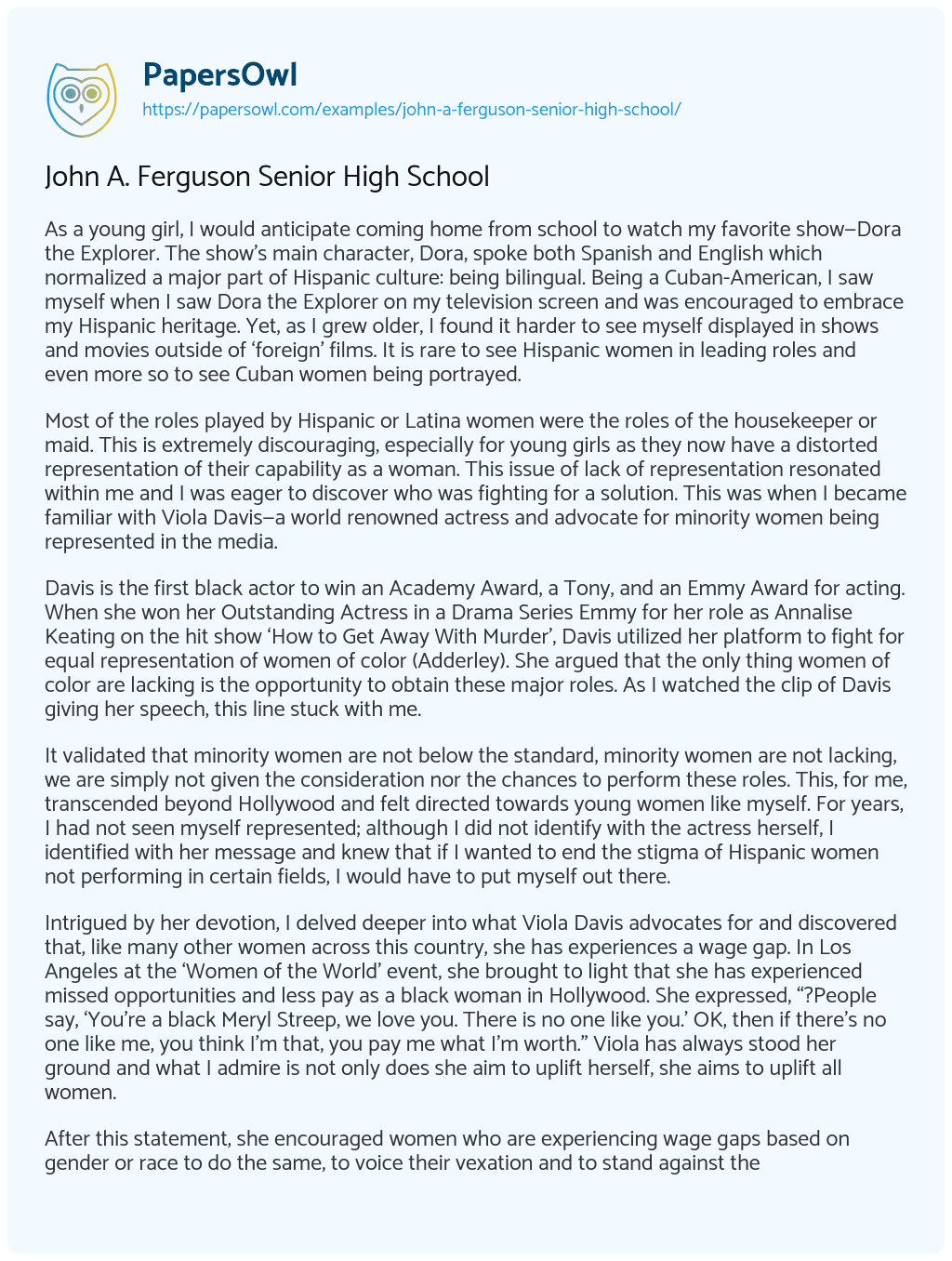 As a young girl, I would anticipate coming home from school to watch my favorite show—Dora the Explorer. The show’s main character, Dora, spoke both Spanish and English which normalized a major part of Hispanic culture: being bilingual. Being a Cuban-American, I saw myself when I saw Dora the Explorer on my television screen and was encouraged to embrace my Hispanic heritage. Yet, as I grew older, I found it harder to see myself displayed in shows and movies outside of ‘foreign’ films. It is rare to see Hispanic women in leading roles and even more so to see Cuban women being portrayed.

Most of the roles played by Hispanic or Latina women were the roles of the housekeeper or maid. This is extremely discouraging, especially for young girls as they now have a distorted representation of their capability as a woman. This issue of lack of representation resonated within me and I was eager to discover who was fighting for a solution. This was when I became familiar with Viola Davis—a world renowned actress and advocate for minority women being represented in the media.

Davis is the first black actor to win an Academy Award, a Tony, and an Emmy Award for acting. When she won her Outstanding Actress in a Drama Series Emmy for her role as Annalise Keating on the hit show ‘How to Get Away With Murder’, Davis utilized her platform to fight for equal representation of women of color (Adderley). She argued that the only thing women of color are lacking is the opportunity to obtain these major roles. As I watched the clip of Davis giving her speech, this line stuck with me.

It validated that minority women are not below the standard, minority women are not lacking, we are simply not given the consideration nor the chances to perform these roles. This, for me, transcended beyond Hollywood and felt directed towards young women like myself. For years, I had not seen myself represented; although I did not identify with the actress herself, I identified with her message and knew that if I wanted to end the stigma of Hispanic women not performing in certain fields, I would have to put myself out there.

Intrigued by her devotion, I delved deeper into what Viola Davis advocates for and discovered that, like many other women across this country, she has experiences a wage gap. In Los Angeles at the ‘Women of the World’ event, she brought to light that she has experienced missed opportunities and less pay as a black woman in Hollywood. She expressed, “?People say, ‘You’re a black Meryl Streep, we love you. There is no one like you.’ OK, then if there’s no one like me, you think I’m that, you pay me what I’m worth.” Viola has always stood her ground and what I admire is not only does she aim to uplift herself, she aims to uplift all women.

After this statement, she encouraged women who are experiencing wage gaps based on gender or race to do the same, to voice their vexation and to stand against these standards. After further research, I found that Davis has started her own production company in which she offers women of color leading roles. This inspired me: if an opportunity is not presented for myself or women like me, I should make the opportunity available. When Davis saw she was not given the chance to audition for leading roles, she ensured that the women who came after her would have what she missed. I admire Viola Davis for amplifying the voice of marginalized women around the world who experience inequality based on gender and race, and aspire to begin my own journey of opening the door for Hispanic women leading various fields.

Empowered by Davis’ words on fighting for equal pay, I began searching for women like her who have publicly voiced for such. I then came across elite tennis player, Serena Williams. I was familiar with Williams before my research but I did not know of her advocacy for women’s rights. She has won twenty-three grand slam titles and still would have to play for an additional eight months to earn what her male counterparts earn in one year (Khomami). This information was shocking and further proved that even when you are the best in your field, as a woman you can and will still be subject to unjust treatment. Not only is this morally wrong and discouraging to women who are interested or in the field, but legally should not be happening in this day of age.

Williams herself has always stood out to me because when you speak of the sport of tennis, she is at the forefront. She is truly one of the very few women that have completely dominated their athletic profession regardless of gender. Her presence alone on the court after so many years of determination gives women courage to persevere. Upon more reading, I learned that Williams has faced endless sexism throughout her professional career.

After calling a referee a thief, the athlete was scrutinized by the umpire and the world through social media. News sources were describing her attitude as Williams having a meltdown and immature. Although, she was quick to point out that the judgement of her actions was based on the fact that she is a woman. Male tennis players have thrown rackets, cried, and yelled at umpires and were simply labeled as passionate towards the game.

Women who respectfully oppose umpires and keep their composure while doing so are exploited by the mass media. Williams stated, “It blows my mind, but I’m going to continue to fight for women and to fight for us to have equal coordination … The fact that I have to go through this is just an example for the next person that has emotions and that want to express themselves and they want to be a strong woman. They’re going to be allowed to do that because of today”.

She confirms that to show emotion is not losing your strength. Her selflessness when facing such sexism is what makes her a trailblazer in women’s history. She is not only fighting for herself but she is fighting for others. Being the staple of the sport she plays makes her statement even more significant. By calling out those in her profession and avid viewers of the sport, she risks her spot as one of the greatest athletes of all time. Both Viola Davis and Serena Williams have tackled sexism and ending the wage gap in their respective fields.

Furthermore, they both had one key factor that makes them resilient and champions of long-term change: they do not only want equality for themselves but are ambitious to lead the wave of equality for all women. Another common ground that both women share is that as much as they are assertive, they are respectful. They use the power of their words to move both those they want to uplift and those who oppose them.

Davis and Williams encourage action to stand up for what is right but lead by the example of doing so through trying harder and revolutionizing what it means to be a female actress or athlete. These women have also acquired a great confidence and assertion in their capabilities. They know their worth, which is why they demand the appropriate pay for their work. Both keep calm and poised when speaking on the injustices they have faced. I also attribute this to why have grown to receive more recognition over the past few years. Through their respectful persistence, the two women promote peace and change beyond tennis and Hollywood.

However, while both women are tackling the same problem, they approach it in slightly different manners. Viola Davis has dealt with discrimination for longer than Williams has. I believe, due to this aspect, Davis is more assertive in her approach towards advocating for women’s equality. She uses platforms more polarizing and bigger than interviews, such as the Emmy Awards show. Another important note is, as previously mentioned, she has the same level of expertise and experience as Meryl Streep but is not recognized to be at the same caliber

. I believe this has made Davis become more bold and self-assured when voicing her frustration with the film industry. She also had the chance to branch out and form her own production company, and in a way distance herself from those who are stopping her from evolving further as an actress. As she has dealt with this unjust treatment for longer, I feel as if Davis has turned advocacy into a second career in a way in which Williams has yet to do.

By only glancing through her work, Davis has approached far more than gender and women’s issues; she has also taken on the responsibility of helping put an end to poverty and childhood hunger. Due to this, Davis has more involvement in global and social justice issues, and consequently has become more active in advocating for such. On the other hand, Serena Williams is younger and focuses mainly on tennis for which she is recognized as one of the greatest, if not the greatest, athletes in the sport.

Therefore, Williams has received the proper recognition for her work but is held to a higher standard than her male counterparts all while being paid less than them. Unlike Davis, Williams is not as blunt with her vocabulary but still gets her point across during the game and outside of the game, truly using interviews and social media to get her message of acceptance and gender equality across to a large audience. Williams also does not have the opportunity of branching out in the way Davis does.

She is confined to her sport and league, but she remains pushing for change within what she is currently a part of. Still, throughout the years she has played professionally, she has opened the door for women to enter the sport without being criticized for it.

Thus, even with different years of dedication towards advocacy and varying opportunities to apply their determination, Williams and Davis have both contributed significantly towards gender equality beyond acting and sports. Both have normalized being a woman of color at the forefront of their field and continue to fight for long-term change of gender roles and discriminatory stigmas. I aim to set an example, in the same way these women have, for Hispanic women to embrace their culture and push themselves to be the leaders of their fields.

The Affects of Legalized Abortion on High School Graduation Rates