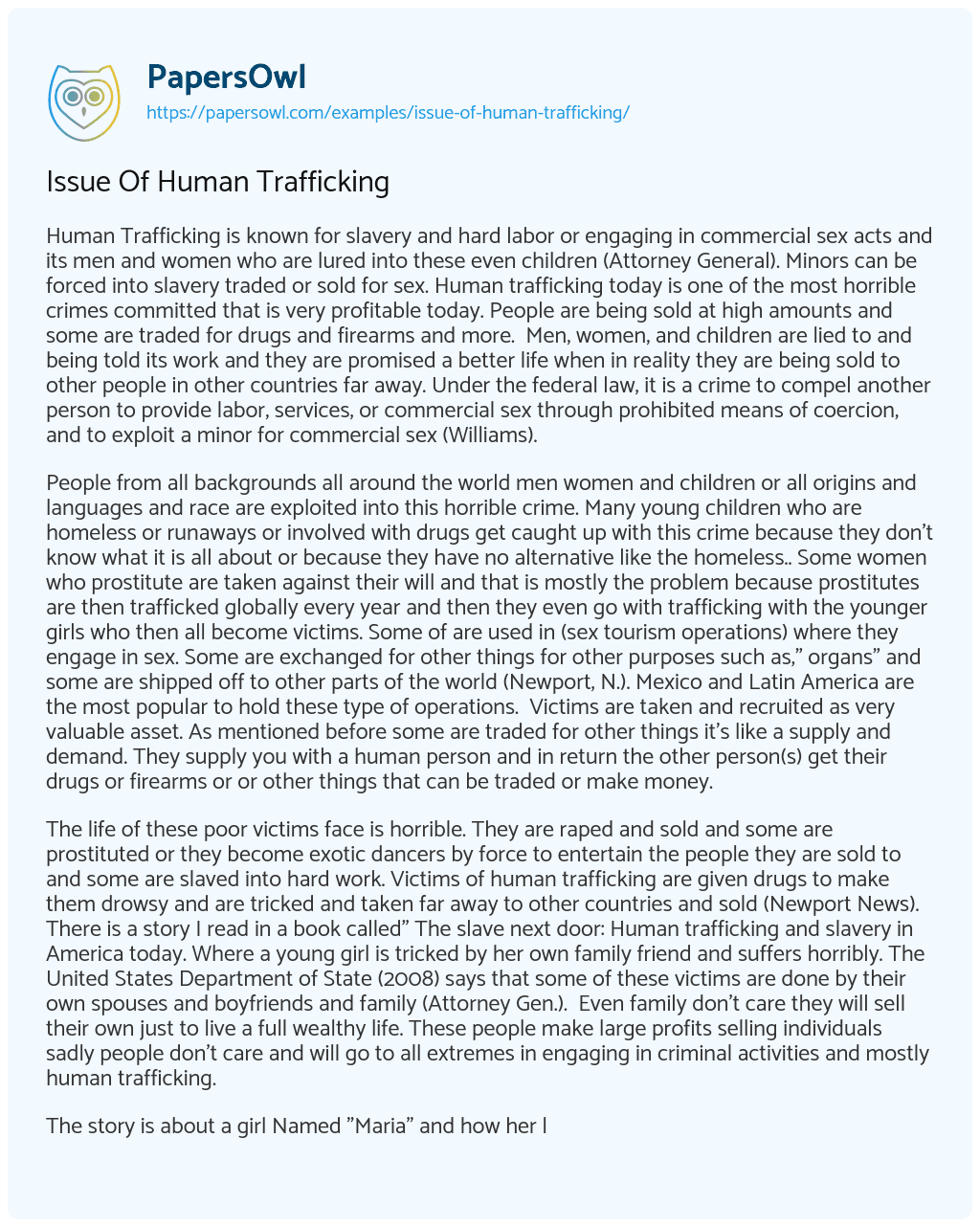 Human Trafficking is known for slavery and hard labor or engaging in commercial sex acts and its men and women who are lured into these even children (Attorney General). Minors can be forced into slavery traded or sold for sex. Human trafficking today is one of the most horrible crimes committed that is very profitable today. People are being sold at high amounts and some are traded for drugs and firearms and more.  Men, women, and children are lied to and being told its work and they are promised a better life when in reality they are being sold to other people in other countries far away. Under the federal law, it is a crime to compel another person to provide labor, services, or commercial sex through prohibited means of coercion, and to exploit a minor for commercial sex (Williams).

People from all backgrounds all around the world men women and children or all origins and languages and race are exploited into this horrible crime. Many young children who are homeless or runaways or involved with drugs get caught up with this crime because they don’t know what it is all about or because they have no alternative like the homeless.. Some women who prostitute are taken against their will and that is mostly the problem because prostitutes are then trafficked globally every year and then they even go with trafficking with the younger girls who then all become victims. Some of are used in (sex tourism operations) where they engage in sex. Some are exchanged for other things for other purposes such as,” organs” and some are shipped off to other parts of the world (Newport, N.). Mexico and Latin America are the most popular to hold these type of operations.  Victims are taken and recruited as very valuable asset. As mentioned before some are traded for other things it’s like a supply and demand. They supply you with a human person and in return the other person(s) get their drugs or firearms or or other things that can be traded or make money.

The life of these poor victims face is horrible. They are raped and sold and some are prostituted or they become exotic dancers by force to entertain the people they are sold to and some are slaved into hard work. Victims of human trafficking are given drugs to make them drowsy and are tricked and taken far away to other countries and sold (Newport News). There is a story I read in a book called” The slave next door: Human trafficking and slavery in America today. Where a young girl is tricked by her own family friend and suffers horribly. The United States Department of State (2008) says that some of these victims are done by their own spouses and boyfriends and family (Attorney Gen.).  Even family don’t care they will sell their own just to live a full wealthy life. These people make large profits selling individuals sadly people don’t care and will go to all extremes in engaging in criminal activities and mostly human trafficking.

The story is about a girl Named “Maria” and how her life changed horribly. Sandra Bearden 23 year old women a homemaker married mother of four children middle class family living quite well in a beautiful neighborhood is now serving life sentence in prison for human trafficking. (Bales p.4). Mrs. Bearden knew a family who had a 12 year daughter in Mexico that wanted to send her away to live a better life in the United States and learn English. Mrs. Bearden told Maria’s parents that she would take her with her and she crossed her over and promised her a rich better life and she would also help her learn English. Maria the 12 year old was lied to, she was slaved to clean overworked every day and night and if she was caught sleeping on the job Mrs. Bearden would physically beat her with objects and sexually abuse her. She would feed her dog feces to eat with no water (Bales, p. 4). Mrs. Bearden was caught one day when neighbors saw Maria in the backyard chained up with the dogs. Maria suffered from head trauma, abrasions, forcible rape, and dehydration. It is terrible the things this poor 12 year old went through, but it is people like Mrs. Bearden who trick women and young girls to a promising life and get caught up being trafficked and enslaved. (Bales). Many of these women die from the slavery they are driven through by force.

U.S. State Department study say that 14, 5000 to 17,000 people are trafficked all over the United States and enslaved every year (Bales p. 6). They say that California is one of the largest states where human trafficking cases were reported (Attorney Gen.). In sex trafficking alone 1,33,1 in 2016 cases and of 1, 0521 were labor cases and 46 cases were either both labor or sex trafficking. The other cases were uncounted for (Attorney Gen.) It is so awful because a lot of these cases go unreported and people children mainly are the ones who suffer the most because they are so young and don’t understand what is going on.

Who are these horrible people that traffic humans? Women who prostitute if they have a pimp it is the pimp that sells them for money or drugs. Sometimes organized crimes like the Mafias are believed to have some kind of planning in selling people for trade.  It is said that these organizations have criminal skills and have a network where they follow the type of way to catch their victims.  They have a protocol they follow for instances,” The recruiter who looks for their victims, The Travel agent who arranges the place to send them off to, Documents the person who creates all the false Id’s then come the employer where they are promised to work, but in reality of it all they are set up and sold, lastly the Enforcer that protects the employer and victims from Police so that they do not get caught. If any of these victims try to get away they are beaten up severely or even killed. They are not allowed to use any phones or computers. They are heavily watched (Newport, N.). There is absolutely no way that they can get away.

What is being done to stop this crime?

It is a huge goal for all these agencies to stop this crime. They will continue to help these victims and build cases on these traffickers. They will get more efficient and stronger and better to find ways to put this trafficking to a stop (Williams). I truly believe one day this crime will stop and be put to an end. There are many agencies helping all over the world to help put this to an end. There is an enormous amount of people who are earning a living on selling humans.

What is Human Trafficking?