Is Graffiti Art or Crime of Vandalism? 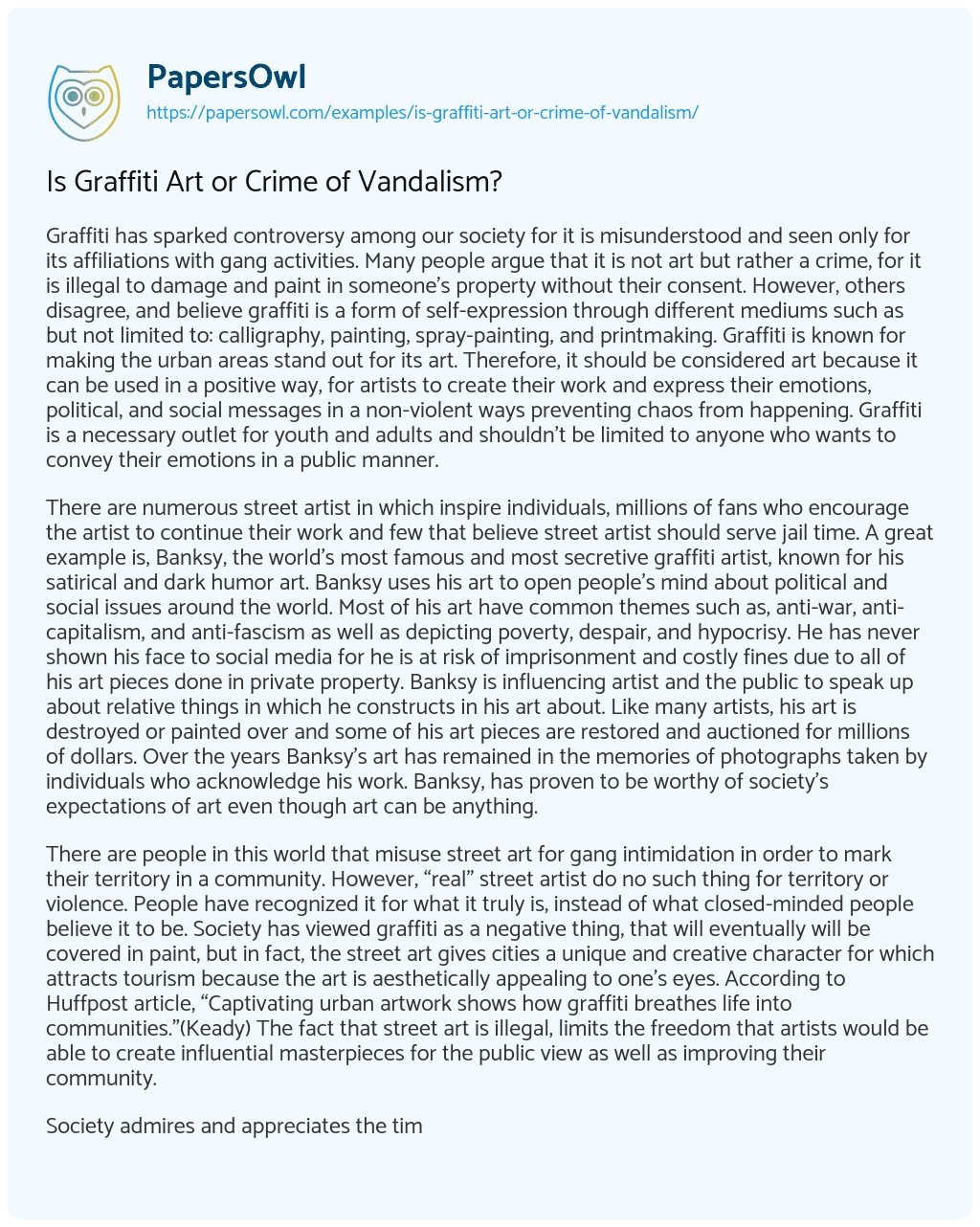 Graffiti has sparked controversy among our society for it is misunderstood and seen only for its affiliations with gang activities. Many people argue that it is not art but rather a crime, for it is illegal to damage and paint in someone’s property without their consent. However, others disagree, and believe graffiti is a form of self-expression through different mediums such as but not limited to: calligraphy, painting, spray-painting, and printmaking. Graffiti is known for making the urban areas stand out for its art. Therefore, it should be considered art because it can be used in a positive way, for artists to create their work and express their emotions, political, and social messages in a non-violent ways preventing chaos from happening. Graffiti is a necessary outlet for youth and adults and shouldn’t be limited to anyone who wants to convey their emotions in a public manner.

There are numerous street artist in which inspire individuals, millions of fans who encourage the artist to continue their work and few that believe street artist should serve jail time. A great example is, Banksy, the world’s most famous and most secretive graffiti artist, known for his satirical and dark humor art. Banksy uses his art to open people’s mind about political and social issues around the world. Most of his art have common themes such as, anti-war, anti-capitalism, and anti-fascism as well as depicting poverty, despair, and hypocrisy. He has never shown his face to social media for he is at risk of imprisonment and costly fines due to all of his art pieces done in private property. Banksy is influencing artist and the public to speak up about relative things in which he constructs in his art about. Like many artists, his art is destroyed or painted over and some of his art pieces are restored and auctioned for millions of dollars. Over the years Banksy’s art has remained in the memories of photographs taken by individuals who acknowledge his work. Banksy, has proven to be worthy of society’s expectations of art even though art can be anything.

There are people in this world that misuse street art for gang intimidation in order to mark their territory in a community. However, “real” street artist do no such thing for territory or violence. People have recognized it for what it truly is, instead of what closed-minded people believe it to be. Society has viewed graffiti as a negative thing, that will eventually will be covered in paint, but in fact, the street art gives cities a unique and creative character for which attracts tourism because the art is aesthetically appealing to one’s eyes. According to Huffpost article, “Captivating urban artwork shows how graffiti breathes life into communities.”(Keady) The fact that street art is illegal, limits the freedom that artists would be able to create influential masterpieces for the public view as well as improving their community.

Society admires and appreciates the time and effort the artist goes through in order to display their work. The risk of getting caught are at much higher stakes. Art has different forms and styles therefore the isn’t an exact guideline in which someone can not consider something art. Banksy is one of the many street artists in which have many fans including celebrities who purchase his artwork. Society has expanded their views of the definition of art and what is considered to be. Banksy’s art has provoked debates and discussion to all street art and will continue to do so until society accepts graffiti as an outlet of expression to the public’s eyes.

Is Graffiti Art or Crime of Vandalism?. (2021, Apr 26). Retrieved from https://papersowl.com/examples/is-graffiti-art-or-crime-of-vandalism/

Is Graffiti an Art?

How Art has been Used to Influence on Issues?

My View on Crime and Crime Fighting