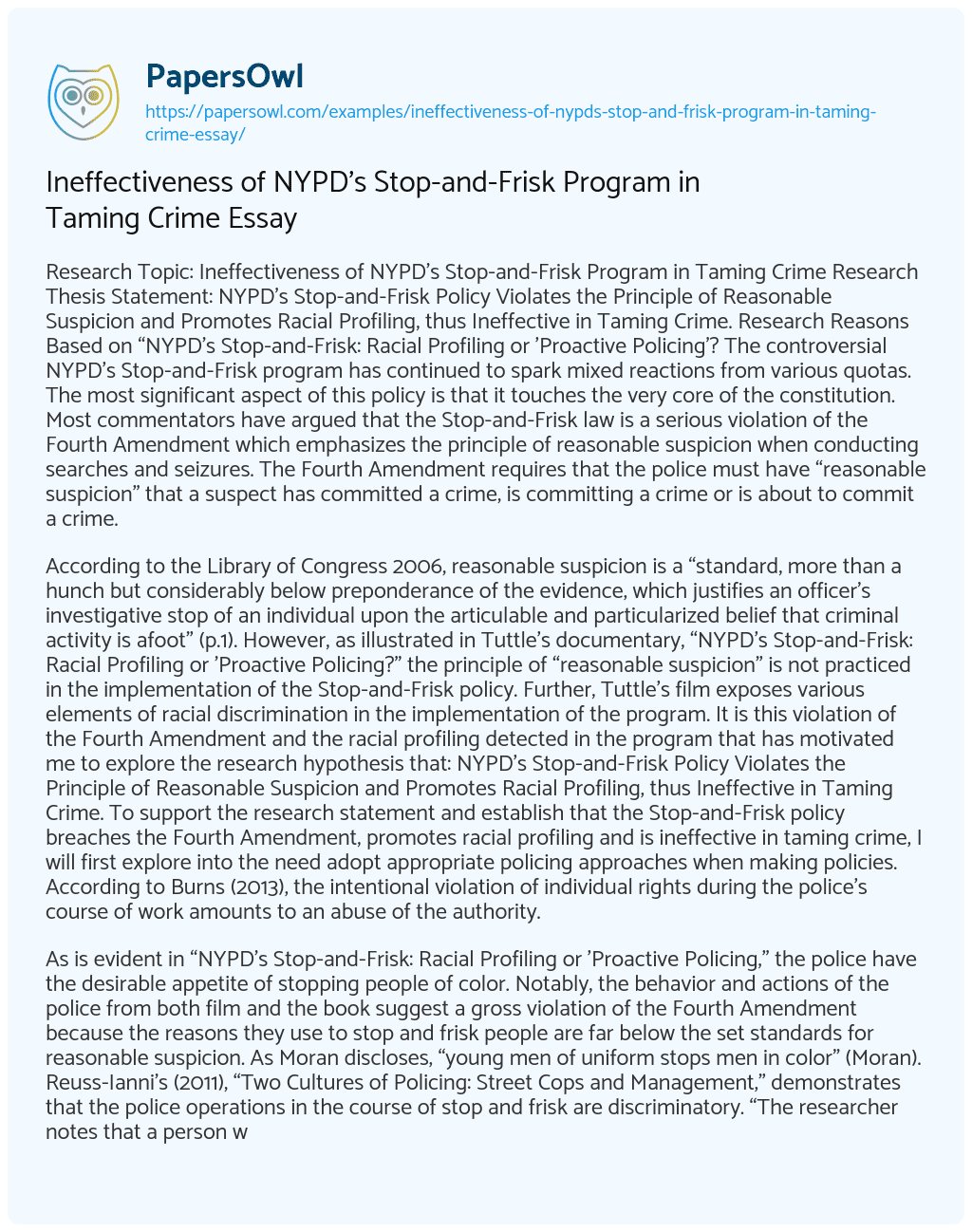 Research Topic: Ineffectiveness of NYPD’s Stop-and-Frisk Program in Taming Crime Research Thesis Statement: NYPD’s Stop-and-Frisk Policy Violates the Principle of Reasonable Suspicion and Promotes Racial Profiling, thus Ineffective in Taming Crime. Research Reasons Based on “NYPD’s Stop-and-Frisk: Racial Profiling or ‘Proactive Policing’? The controversial NYPD’s Stop-and-Frisk program has continued to spark mixed reactions from various quotas. The most significant aspect of this policy is that it touches the very core of the constitution. Most commentators have argued that the Stop-and-Frisk law is a serious violation of the Fourth Amendment which emphasizes the principle of reasonable suspicion when conducting searches and seizures. The Fourth Amendment requires that the police must have “reasonable suspicion” that a suspect has committed a crime, is committing a crime or is about to commit a crime.

According to the Library of Congress 2006, reasonable suspicion is a “standard, more than a hunch but considerably below preponderance of the evidence, which justifies an officer’s investigative stop of an individual upon the articulable and particularized belief that criminal activity is afoot” (p.1). However, as illustrated in Tuttle’s documentary, “NYPD’s Stop-and-Frisk: Racial Profiling or ‘Proactive Policing?” the principle of “reasonable suspicion” is not practiced in the implementation of the Stop-and-Frisk policy. Further, Tuttle’s film exposes various elements of racial discrimination in the implementation of the program. It is this violation of the Fourth Amendment and the racial profiling detected in the program that has motivated me to explore the research hypothesis that: NYPD’s Stop-and-Frisk Policy Violates the Principle of Reasonable Suspicion and Promotes Racial Profiling, thus Ineffective in Taming Crime. To support the research statement and establish that the Stop-and-Frisk policy breaches the Fourth Amendment, promotes racial profiling and is ineffective in taming crime, I will first explore into the need adopt appropriate policing approaches when making policies. According to Burns (2013), the intentional violation of individual rights during the police’s course of work amounts to an abuse of the authority.

As is evident in “NYPD’s Stop-and-Frisk: Racial Profiling or ‘Proactive Policing,” the police have the desirable appetite of stopping people of color. Notably, the behavior and actions of the police from both film and the book suggest a gross violation of the Fourth Amendment because the reasons they use to stop and frisk people are far below the set standards for reasonable suspicion. As Moran discloses, “young men of uniform stops men in color” (Moran). Reuss-Ianni’s (2011), “Two Cultures of Policing: Street Cops and Management,” demonstrates that the police operations in the course of stop and frisk are discriminatory. “The researcher notes that a person who “looks dirty” is tracked and observed whether they are violating any law and are immediately picked without exhibiting any reasonable suspicion.” (Reuss-Ianni 108). In the documentary, Alvin narrates his story that the cops treated him with a lot of suspicions when he kept on looking back with his hook up. The film by Moran and the arguments in Reuss-Ianni’s book attest to the fact that the policy fuels racial profiling. The data from the judiciary databases and the revelations in French’s film confirm that the Stop-and-Frisk program has been infective in minimizing crime. Chi’En reveals “that only one is recovered for every 3000 stop and frisk conducted “. (Chi’En1).

In French’s film, “Stop and Frisk: By the numbers Part 1,” French illustrates that there has been an insignificant drop in crime since the Stop-and-Frisk program was adopted in New York City. Crimes such as Homicide, robbery, and burglary have only dropped to 90%, 83% and 86% respectively”. (French). These poor result of the program has been the underlying reason for the ruthless criticism to the stop and frisk policy. As statistics suggest, the policy cannot be relied upon in fighting and taming crime. The program is being used to advance other goals other than reducing crime. Overall, this research has shown that the Stop-and-Frisk program violates the reasonable suspicion clause in the Fourth Amendment, fuels racial profiling and is ineffective in curbing crime.

Ineffectiveness of NYPD’s Stop-and-Frisk Program in Taming Crime Essay. (2021, May 29). Retrieved from https://papersowl.com/examples/ineffectiveness-of-nypds-stop-and-frisk-program-in-taming-crime-essay/

The Unreasonable Practice: Stop and Frisk

Terry Vs Ohio and Fourth Amendment

Reactions to the Hunted and the Hated