In James Mcbride’s the Color of Water, it Tells the Story of Ruth 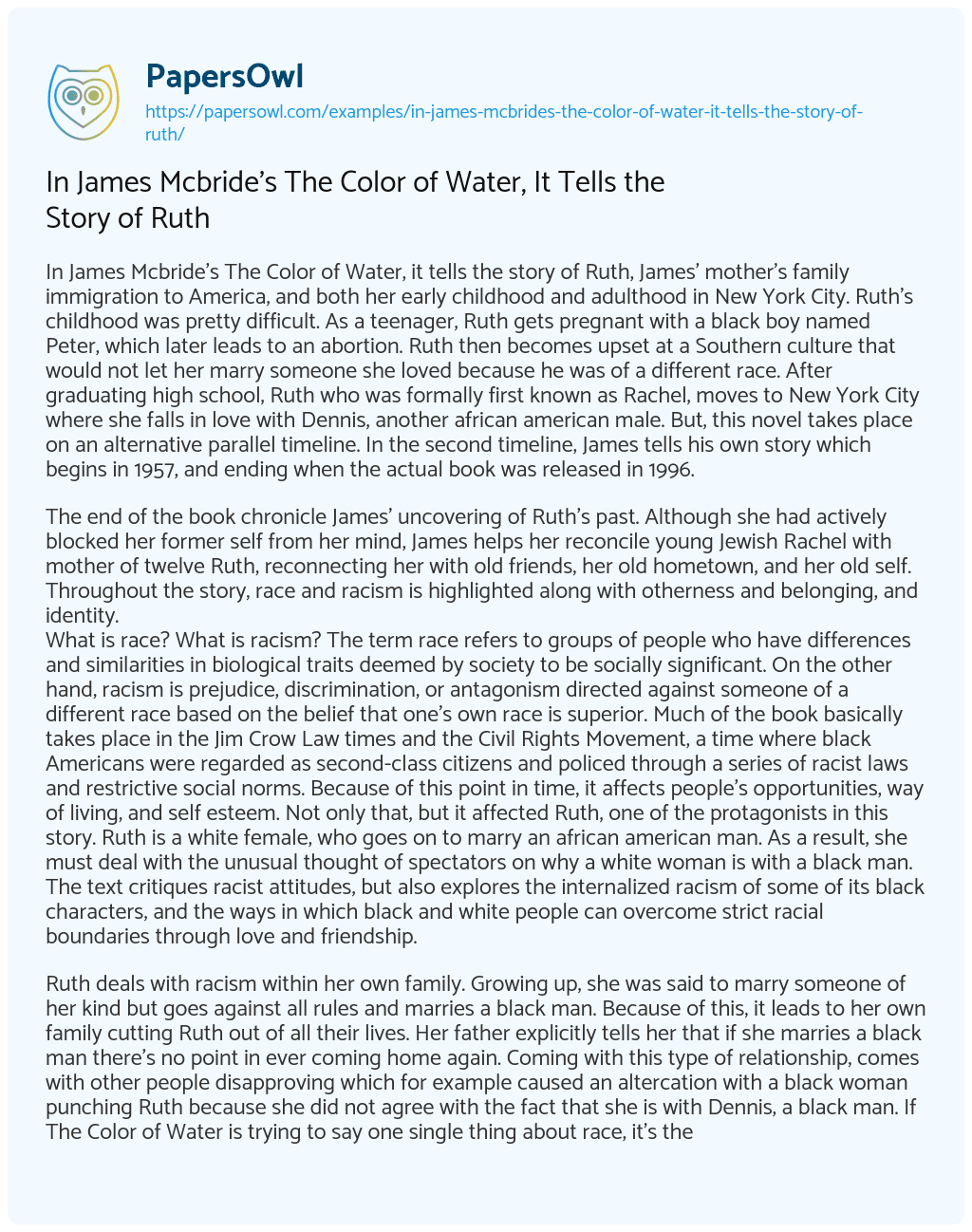 In James Mcbride’s The Color of Water, it tells the story of Ruth, James’ mother’s family immigration to America, and both her early childhood and adulthood in New York City. Ruth’s childhood was pretty difficult. As a teenager, Ruth gets pregnant with a black boy named Peter, which later leads to an abortion. Ruth then becomes upset at a Southern culture that would not let her marry someone she loved because he was of a different race. After graduating high school, Ruth who was formally first known as Rachel, moves to New York City where she falls in love with Dennis, another african american male. But, this novel takes place on an alternative parallel timeline. In the second timeline, James tells his own story which begins in 1957, and ending when the actual book was released in 1996.

The end of the book chronicle James’ uncovering of Ruth’s past. Although she had actively blocked her former self from her mind, James helps her reconcile young Jewish Rachel with mother of twelve Ruth, reconnecting her with old friends, her old hometown, and her old self. Throughout the story, race and racism is highlighted along with otherness and belonging, and identity.
What is race? What is racism? The term race refers to groups of people who have differences and similarities in biological traits deemed by society to be socially significant. On the other hand, racism is prejudice, discrimination, or antagonism directed against someone of a different race based on the belief that one’s own race is superior. Much of the book basically takes place in the Jim Crow Law times and the Civil Rights Movement, a time where black Americans were regarded as second-class citizens and policed through a series of racist laws and restrictive social norms. Because of this point in time, it affects people’s opportunities, way of living, and self esteem. Not only that, but it affected Ruth, one of the protagonists in this story. Ruth is a white female, who goes on to marry an african american man. As a result, she must deal with the unusual thought of spectators on why a white woman is with a black man. The text critiques racist attitudes, but also explores the internalized racism of some of its black characters, and the ways in which black and white people can overcome strict racial boundaries through love and friendship.

Ruth deals with racism within her own family. Growing up, she was said to marry someone of her kind but goes against all rules and marries a black man. Because of this, it leads to her own family cutting Ruth out of all their lives. Her father explicitly tells her that if she marries a black man there’s no point in ever coming home again. Coming with this type of relationship, comes with other people disapproving which for example caused an altercation with a black woman punching Ruth because she did not agree with the fact that she is with Dennis, a black man. If The Color of Water is trying to say one single thing about race, it’s thesis is that race in America is complicated.

James and Ruth spend much of their lives feeling as though they do not belong to their immediate communities. Ruth is an outsider both in her white, Christian southern town, as well as in her birth religion of Judaism. As for James, he is presented as black but is not much like all the other black kids he encounters. Ruth doesn’t feel like a part of her white, Christian Suffolk community because she is Jewish and an immigrant. As a child, Ruth’s Judaism overrides much of her white privilege, and she feels like an outsider in her own hometown. She describes growing up and feeling like nobody likes her, people in the town mock her for speaking Yiddish, and even within the Jewish community she feels ostracized because her family does business with black people. As a person of mixed race, James is unsure how to be both black and white at once, and struggles to fit in for much of his youth and early adulthood. James never fully feels like he belongs to a single group of people. He feels alienated from his classmates at his predominantly white schools, but also notices that he’s different from his black neighbors because of his white mother. Along with everything, James and his siblings grow up in the Black Power era and while Black Power is alluring, James cannot fully buy into its platform because he fears for his white mother. James and Ruth spend their lives searching for a sense of belonging, and the book itself is a manifestation of this search.
Ruth McBride-Jordan sees her former self, Rachel Shilsky, as an entirely separate person. She uses her memories to divide her life in half, and attempts to erase the earlier version of herself. Throughout the story, Ruth chooses not to access these memories that old Rachel only exists in. Not only is Ruth in a crisis, but her kids are as well. James and his siblings still wonder of their background of black heritage since they are of mixed races. James’ identity is informed by his lack of knowledge of Ruth’s past, and then rewritten as he finds out her life happenings with whiteness and Judaism.

Because Ruth decides to forget about her past as Rachel, it allows her to pick and choose who she wants to present herself as, but at the same time affects her children’s ability to feel whole. At the end of her life, Ruth becomes more interested in preserving her memories. After a life defined by casting off old experiences and identities when they became too painful, Ruth is finally ready to record the present and begin to revisit the past. The book itself is then an exploration of memories Ruth has repressed, memories of a girl and woman she no longer believes herself to be. James recognizes that his mother has changed in the forty years since she left Virginia and converted to Christianity. Where Ruth once was too close to the past to face it, she’s finally ready to look back, and see her life in full. At the end of everything, no matter what Ruth has gone through throughout her whole life, in her later years she is ready to revisit her old self and reveal anything and everything to her son James, so he can finally understand her background.

The Color of Water illustrates problems that people nowadays still encounter. Whether it is dealing with racism and being judged with who they surround themselves with, or if they have trouble finding exactly who they truly are. It teaches the lesson that no matter what crisis’ come in your way, as time passes it is always good to reflect on your past to not only help you understand where you went wrong but to benefit those who have been anxious to know as well. Aside from race and racism, finding out where you belong, and discovering identity are major topics that are focused on throughout the course of the story.

In James Mcbride's The Color of Water, It Tells the Story of Ruth. (2019, Oct 25). Retrieved from https://papersowl.com/examples/in-james-mcbrides-the-color-of-water-it-tells-the-story-of-ruth/

The Color of Water: a Story Told by James McBride

The Color of Water is a Biography Written by James McBride

The Color of the Water by James Mcbride

James McBride, Author of the Color of Water

James McBride Explores his Mothers and his own Identify

Ruth’s Experienced in Life, the Color of Water