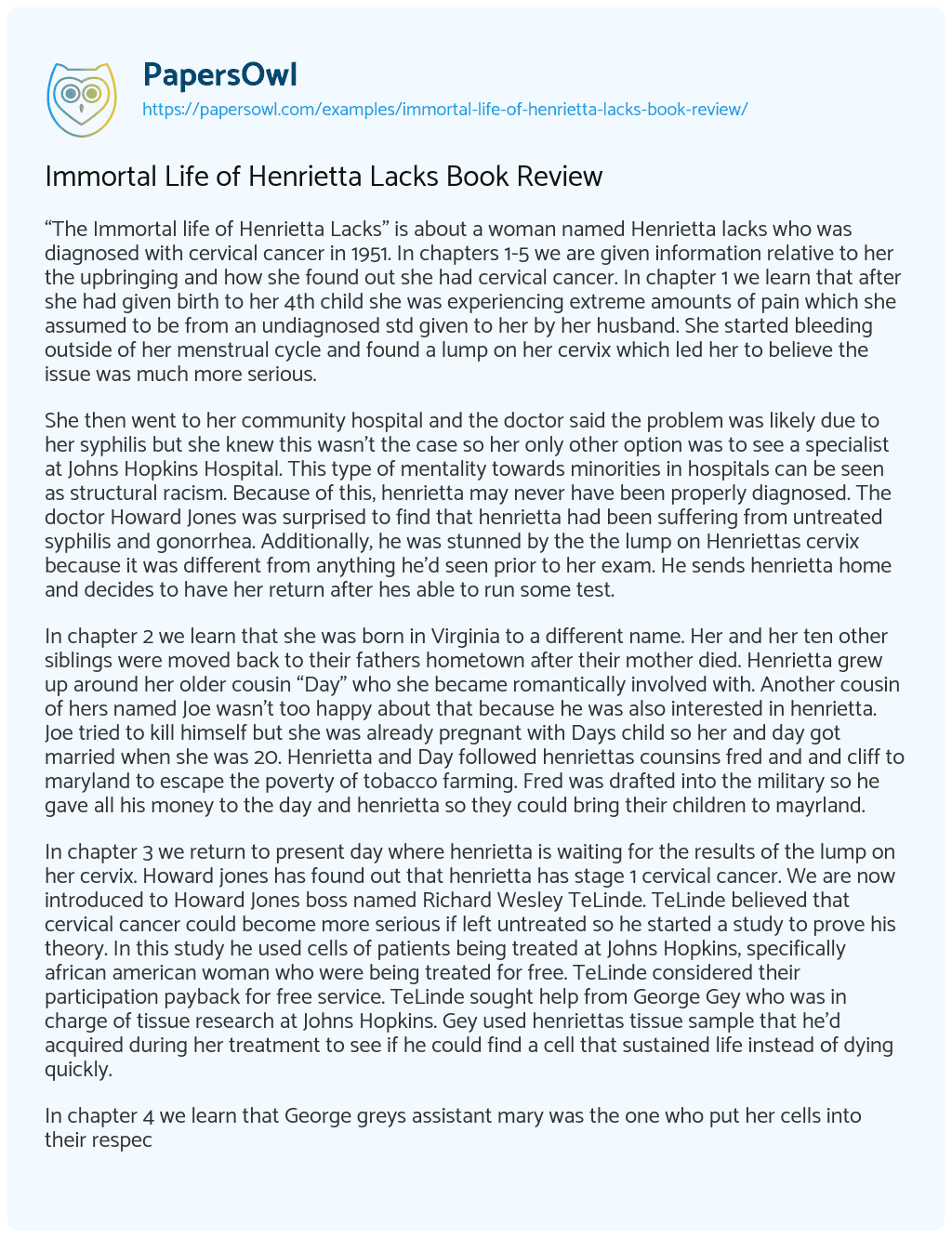 “The Immortal life of Henrietta Lacks” is about a woman named Henrietta lacks who was diagnosed with cervical cancer in 1951. In chapters 1-5 we are given information relative to her the upbringing and how she found out she had cervical cancer. In chapter 1 we learn that after she had given birth to her 4th child she was experiencing extreme amounts of pain which she assumed to be from an undiagnosed std given to her by her husband. She started bleeding outside of her menstrual cycle and found a lump on her cervix which led her to believe the issue was much more serious.

She then went to her community hospital and the doctor said the problem was likely due to her syphilis but she knew this wasn’t the case so her only other option was to see a specialist at Johns Hopkins Hospital. This type of mentality towards minorities in hospitals can be seen as structural racism. Because of this, henrietta may never have been properly diagnosed. The doctor Howard Jones was surprised to find that henrietta had been suffering from untreated syphilis and gonorrhea. Additionally, he was stunned by the the lump on Henriettas cervix because it was different from anything he’d seen prior to her exam. He sends henrietta home and decides to have her return after hes able to run some test.

In chapter 2 we learn that she was born in Virginia to a different name. Her and her ten other siblings were moved back to their fathers hometown after their mother died. Henrietta grew up around her older cousin “Day” who she became romantically involved with. Another cousin of hers named Joe wasn’t too happy about that because he was also interested in henrietta. Joe tried to kill himself but she was already pregnant with Days child so her and day got married when she was 20. Henrietta and Day followed henriettas counsins fred and and cliff to maryland to escape the poverty of tobacco farming. Fred was drafted into the military so he gave all his money to the day and henrietta so they could bring their children to mayrland.

In chapter 3 we return to present day where henrietta is waiting for the results of the lump on her cervix. Howard jones has found out that henrietta has stage 1 cervical cancer. We are now introduced to Howard Jones boss named Richard Wesley TeLinde. TeLinde believed that cervical cancer could become more serious if left untreated so he started a study to prove his theory. In this study he used cells of patients being treated at Johns Hopkins, specifically african american woman who were being treated for free. TeLinde considered their participation payback for free service. TeLinde sought help from George Gey who was in charge of tissue research at Johns Hopkins. Gey used henriettas tissue sample that he’d acquired during her treatment to see if he could find a cell that sustained life instead of dying quickly.

In chapter 4 we learn that George greys assistant mary was the one who put her cells into their respected tubes and named them HeLa. During this time henrietta was in the hospital waiting to be released. She was doing well so the doctors took off the radium from her cervix and sent her home. A few days after she’d been sent home her cells in greys lab started to grow out of control. Grey was beyond pleased to now have immortal growing human cells and so he shared them with his peers for further research.

In chapter 5 things went back to normal for henrietta following her radium treatments. She loved to dance and had a very generous and hard-working personality. She liked to present herself well by always keeping her nails up to par. Unfortunately we also learn that henrietta had to give her daughter with epilepsy to the Crownsville hospital for the negro insane. Having to give up her daughter is something no mother should have to do. It definitely took a toll of henriettas mental health. Henrietta is forced to begin x-ray therapy so she now feels the need to tell her family of her cancer. She started bleeding really badly and finds out that she cant have more children as a result of the intense radiation therapy. Additionally henrietta becomes sick, her skin was becoming burned from the treatments and she felt a burning sensation on her insides as well.

In chapter 6 were introduced to the reason the book is even being written. The author of the book details being present at the “HeLa Cancer Control Symposium” which was hosted by Roland Pattillo who was one of George Greys students and is now a professor at morehouse university. Pattillo wants to protect the lacks because he knows the amount of trauma the family has gone through in regards to henriettas cells. Ultimately he decides to trust skloot and lets her know that deborah and day lack are still alive.

He coaches skloot on how to communicate with the lacks appropriately considering everything they’ve gone through. When skloot first spoke to deborah she was excited about the project and happy to give any information she could. What skloot learned is that the family doesnt understand what happened to henrietta and what Johns Hopkisn had to do with it. Skloot loses communication with deborah because she realized she was giving away too much and skloot must talk to the men of the family in order to understand more. Skloot gets to speak to day and is told to go away because day believed she had henriettas cells.

In chapter 7 we learn that George gey was able to provide samples of henriettas cells to researchers around the world. These researches were now able to experiment and see how human cells would react to different treatments. They couldn’t do these experiments with actual people so this was very groundbreaking. The public had been fooled once before by a researcher who claimed to have immortal cells so they didn’t believe gey had truly found them.

In chapter 8 we learn that all the radiation therapy henrietta had been given wasn’t making her any better. In fact, she is experiencing extreme amounts of pain because the cancer is spreading and so the doctors give her more radiation therapy and take more of her cells for gey, but the cells die immediately because henriettas body is full of toxic material. From the author we learn that gey once told henretta that her cells would make her immortal and she was glad something good would come from her suffering.

In chapter 9 the author of the book travels to baltimore hoping to meet with henriettas family to learn more about her. No one is returning her calls despite the plan they agreed on so she decided to try and find henriettas first house herself. As she drives through turner station, she becomes anxious because she is the only white person there. She runs into a man who promises to take her to Courtney Speed who started a foundation for the creation of henriettas museum. Skloot meets Courtney and tells her why she came to see her, but courtney becomes reluctant to continue their conversation until she gains permission from the lacks family.

In chapter 10 skloot meets henriettas first cousin named cootie. Cootie explains to skloot that henrietta was a sweetheart that was loved by everyone. Cootie also mentions that most of henriettas family believes her illness was the result of voodoo or maybe she was killed by the doctors at johns hopkins.

In chapter 11 we learn that henrietta is about to die. Family and friends do as much as they can to save her but she eventually ends up dying from her inability to process toxins which is a result of her cervical cancer.

The Immortal Life of Henrietta Lacks

Book Review of the Immortal Life of Henrietta Lacks

“The Immortal Life of Henrietta Lacks” by Rebecca Skloot Essay

Henrietta Lacks and the HeLa Cells