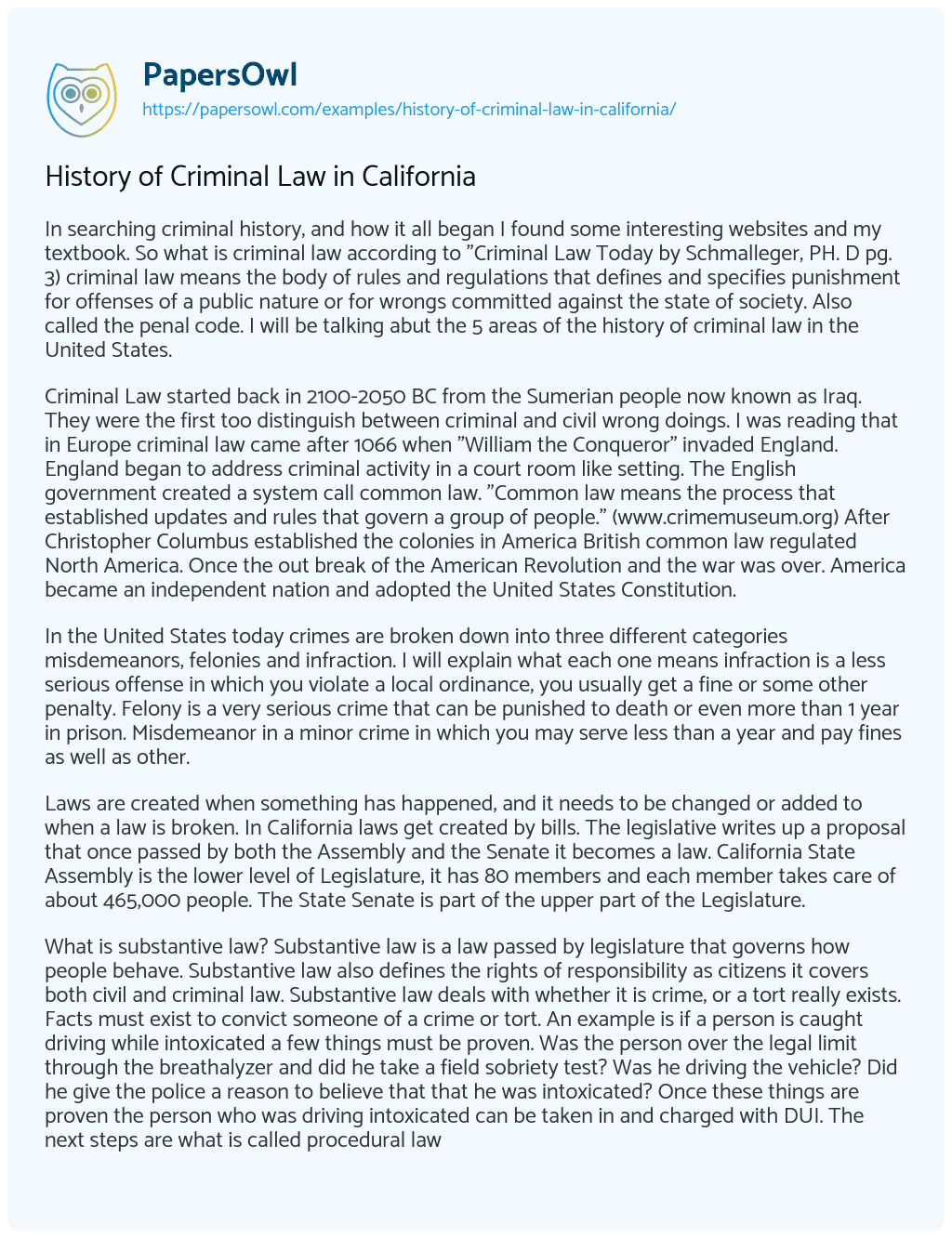 In searching criminal history, and how it all began I found some interesting websites and my textbook. So what is criminal law according to “Criminal Law Today by Schmalleger, PH. D pg. 3) criminal law means the body of rules and regulations that defines and specifies punishment for offenses of a public nature or for wrongs committed against the state of society. Also called the penal code. I will be talking abut the 5 areas of the history of criminal law in the United States.

Criminal Law started back in 2100-2050 BC from the Sumerian people now known as Iraq. They were the first too distinguish between criminal and civil wrong doings. I was reading that in Europe criminal law came after 1066 when “William the Conqueror” invaded England. England began to address criminal activity in a court room like setting. The English government created a system call common law. “Common law means the process that established updates and rules that govern a group of people.” (www.crimemuseum.org) After Christopher Columbus established the colonies in America British common law regulated North America. Once the out break of the American Revolution and the war was over. America became an independent nation and adopted the United States Constitution.

In the United States today crimes are broken down into three different categories misdemeanors, felonies and infraction. I will explain what each one means infraction is a less serious offense in which you violate a local ordinance, you usually get a fine or some other penalty. Felony is a very serious crime that can be punished to death or even more than 1 year in prison. Misdemeanor in a minor crime in which you may serve less than a year and pay fines as well as other.

Laws are created when something has happened, and it needs to be changed or added to when a law is broken. In California laws get created by bills. The legislative writes up a proposal that once passed by both the Assembly and the Senate it becomes a law. California State Assembly is the lower level of Legislature, it has 80 members and each member takes care of about 465,000 people. The State Senate is part of the upper part of the Legislature.

What is substantive law? Substantive law is a law passed by legislature that governs how people behave. Substantive law also defines the rights of responsibility as citizens it covers both civil and criminal law. Substantive law deals with whether it is crime, or a tort really exists. Facts must exist to convict someone of a crime or tort. An example is if a person is caught driving while intoxicated a few things must be proven. Was the person over the legal limit through the breathalyzer and did he take a field sobriety test? Was he driving the vehicle? Did he give the police a reason to believe that that he was intoxicated? Once these things are proven the person who was driving intoxicated can be taken in and charged with DUI. The next steps are what is called procedural laws. What does procedural law mean? Procedural law means the enforcer. What action will take place for his crime. Procedural law follows the due process which is granted to citizens by the 14th Amendment. Procedural law determines what will happen in a civil law suit and criminal. Civil law means breach of contract, behavior that results in injury or even death. An example of civil law can be a divorce, legal custody, and more.

History of Criminal Law in California. (2020, Jan 03). Retrieved from https://papersowl.com/examples/history-of-criminal-law-in-california/

My Opinion about Criminal Law