Feminism in the Handmaid’s Tale 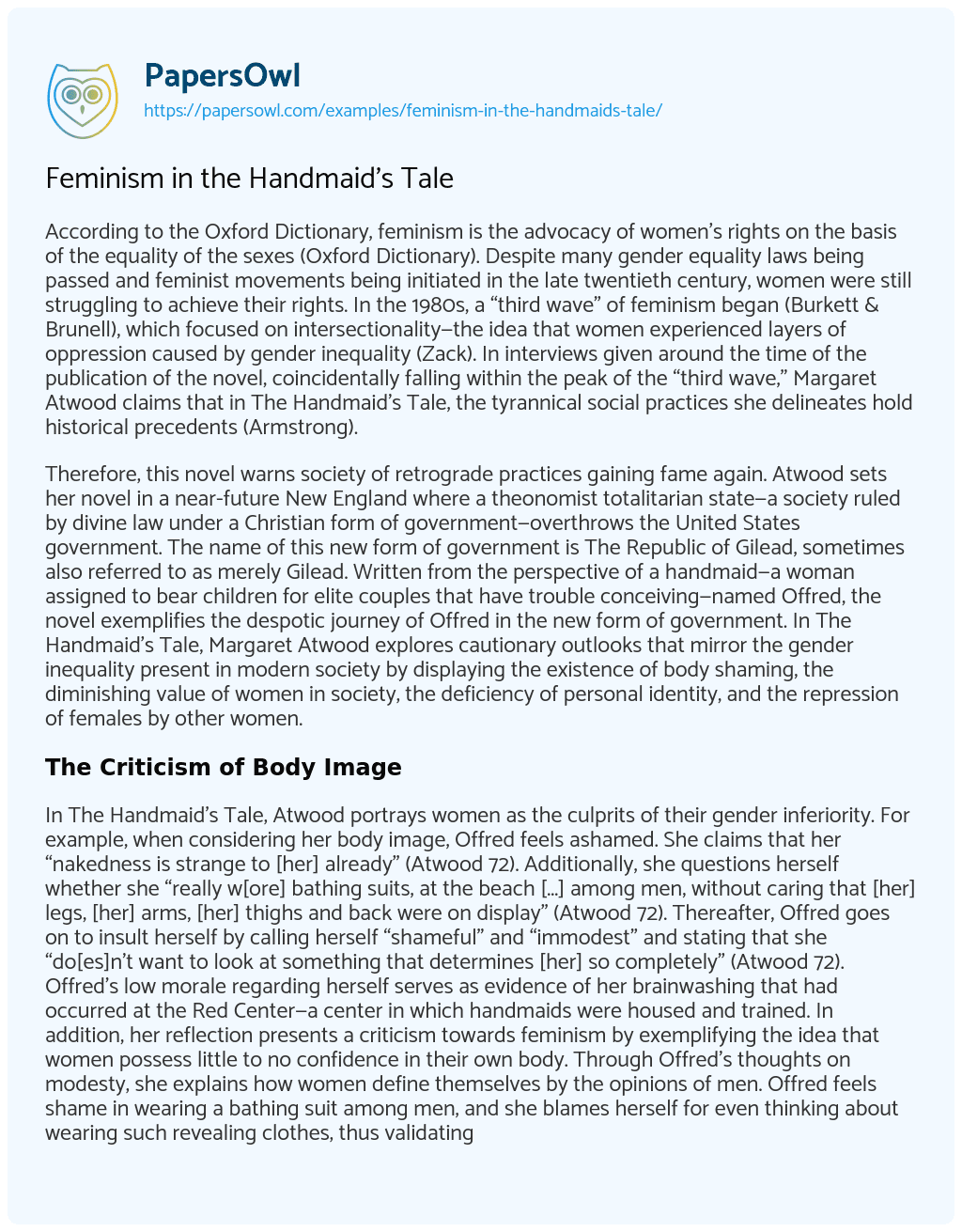 According to the Oxford Dictionary, feminism is the advocacy of women’s rights on the basis of the equality of the sexes (Oxford Dictionary). Despite many gender equality laws being passed and feminist movements being initiated in the late twentieth century, women were still struggling to achieve their rights. In the 1980s, a “third wave” of feminism began (Burkett & Brunell), which focused on intersectionality—the idea that women experienced layers of oppression caused by gender inequality (Zack). In interviews given around the time of the publication of the novel, coincidentally falling within the peak of the “third wave,” Margaret Atwood claims that in The Handmaid’s Tale, the tyrannical social practices she delineates hold historical precedents (Armstrong).

Therefore, this novel warns society of retrograde practices gaining fame again. Atwood sets her novel in a near-future New England where a theonomist totalitarian state—a society ruled by divine law under a Christian form of government—overthrows the United States government. The name of this new form of government is The Republic of Gilead, sometimes also referred to as merely Gilead. Written from the perspective of a handmaid—a woman assigned to bear children for elite couples that have trouble conceiving—named Offred, the novel exemplifies the despotic journey of Offred in the new form of government. In The Handmaid’s Tale, Margaret Atwood explores cautionary outlooks that mirror the gender inequality present in modern society by displaying the existence of body shaming, the diminishing value of women in society, the deficiency of personal identity, and the repression of females by other women.

The Criticism of Body Image

In The Handmaid’s Tale, Atwood portrays women as the culprits of their gender inferiority. For example, when considering her body image, Offred feels ashamed. She claims that her “nakedness is strange to [her] already” (Atwood 72). Additionally, she questions herself whether she “really w[ore] bathing suits, at the beach […] among men, without caring that [her] legs, [her] arms, [her] thighs and back were on display” (Atwood 72). Thereafter, Offred goes on to insult herself by calling herself “shameful” and “immodest” and stating that she “do[es]n’t want to look at something that determines [her] so completely” (Atwood 72). Offred’s low morale regarding herself serves as evidence of her brainwashing that had occurred at the Red Center—a center in which handmaids were housed and trained. In addition, her reflection presents a criticism towards feminism by exemplifying the idea that women possess little to no confidence in their own body. Through Offred’s thoughts on modesty, she explains how women define themselves by the opinions of men. Offred feels shame in wearing a bathing suit among men, and she blames herself for even thinking about wearing such revealing clothes, thus validating that women center their lives around the judgements of men. Furthermore, Atwood displays the discontent nature of women regarding their bodies when Offred once again defames herself:

I can stroke myself, under the dry white sheets, in the dark, but I too am dry and white, hard, granular; it’s like running my hand over a plateful of dried rice; it’s like snow. […] I am like a room where things once happened and now nothing does, except the pollen of the weeds that grow up outside the window, blowing in as dust across the floor. (Atwood 118)

Alienated from her body, Offred feels dispassionate about herself. By comparing herself to an empty room, she depicts the meaninglessness of her body. In a more broad spectrum, one can interpret Offred’s self analysis as an expression of her desire to possess an official paid job. Due to being a handmaid in the newly created Republic of Gilead, Offred can no longer work. Technically, she has a job—that of being a handmaid. However, it is a job given to her against her will and she is not even paid salary for it. Moreover, her job merely consists of birthing children, thus making her feel as if her body is unserviceable to the world. Once more, her low self esteem and feeling of uselessness showcase personal body shaming. Similar to Offred’s negative body image of herself, many women today feel ashamed of their bodies. Specifically, by becoming victims of brainwashing by media’s expectations of the perfect woman, women harshly judge their bodies.

In a study conducted regarding measurements of Playboy centerfold models and Miss America contestants, David Garner, Ph.D., “documented that these ‘model women’ had become significantly thinner from 1959 to 1979 and that advertising for weight-loss diets had grown correspondingly;” a follow-up study revealed that the trend continues through the late 1980s (Garner). Garner’s study displays how media persuades women to strive for a thin body—the ideal body type. An additional study performed by psychotherapist Ann Keamey Cooke, Ph.D., in companionship with Garner revealed that “fifty-six percent of women [globally] say they are dissatisfied with their overall appearance” (Garner). The study’s results depict that more than half of the population of women are not content with their body, thus showing the extent to which media has trained the brains of women to body shame themselves. Offred’s personal reflection on her body and the studies regarding the twentieth century confirm that women are preyed upon by society to feel embarrassed about their bodies. Therefore, Atwood is mirroring the lives of women in the real world through her novel.

Feminism in the Handmaid's Tale. (2021, Jun 10). Retrieved from https://papersowl.com/examples/feminism-in-the-handmaids-tale/

An Analysis of the Handmaid’s Tale by Margaret Atwood

A Dystopian Society in Margaret Atwood’s the Handmaid’s Tale

Yes, “The Handmaid’s Tale” is Feminist