Effect and Influence of Religion on People’s Prejudice 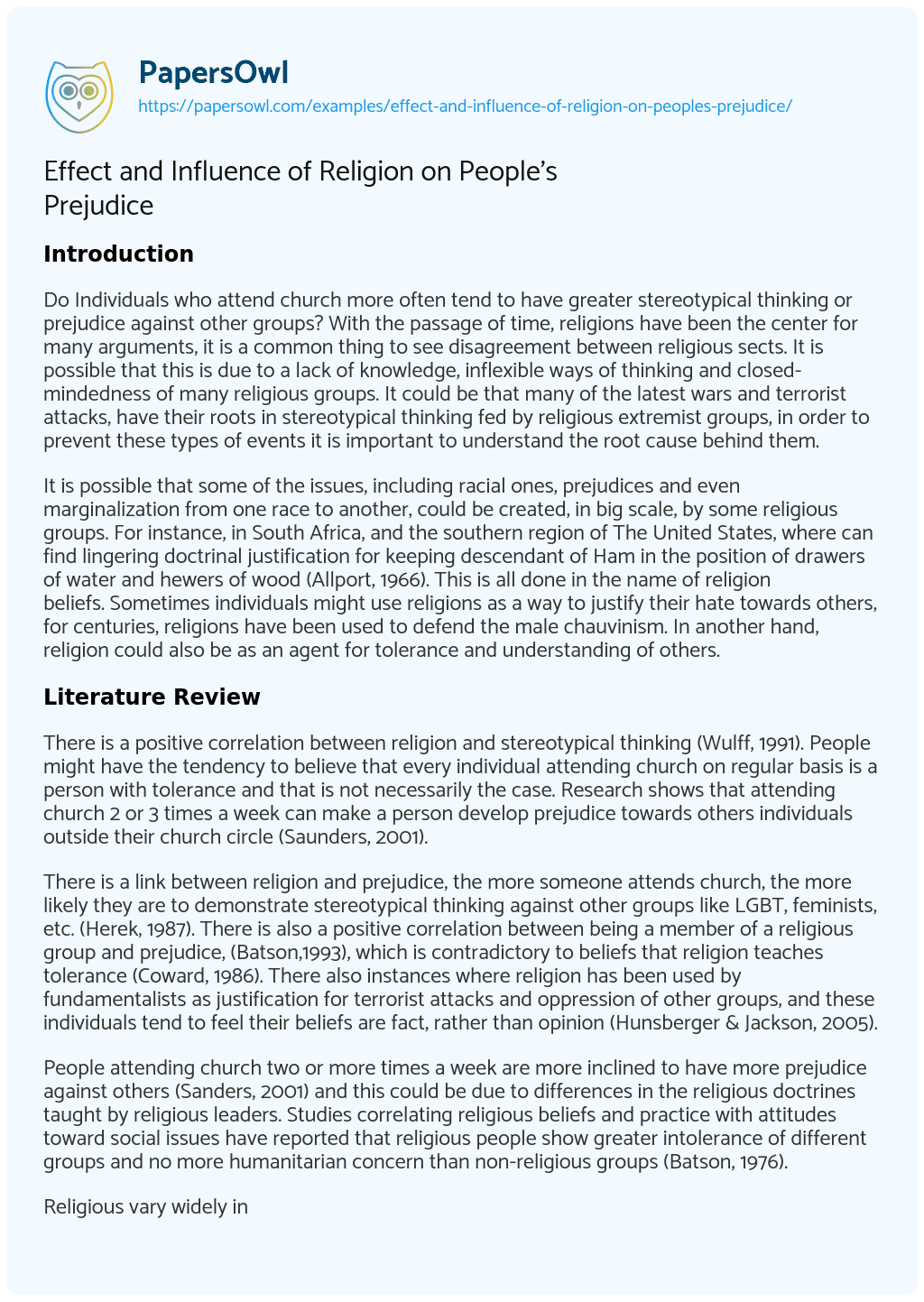 Do Individuals who attend church more often tend to have greater stereotypical thinking or prejudice against other groups? With the passage of time, religions have been the center for many arguments, it is a common thing to see disagreement between religious sects. It is possible that this is due to a lack of knowledge, inflexible ways of thinking and closed-mindedness of many religious groups. It could be that many of the latest wars and terrorist attacks, have their roots in stereotypical thinking fed by religious extremist groups, in order to prevent these types of events it is important to understand the root cause behind them.

It is possible that some of the issues, including racial ones, prejudices and even marginalization from one race to another, could be created, in big scale, by some religious groups. For instance, in South Africa, and the southern region of The United States, where can find lingering doctrinal justification for keeping descendant of Ham in the position of drawers of water and hewers of wood (Allport, 1966). This is all done in the name of religion beliefs. Sometimes individuals might use religions as a way to justify their hate towards others, for centuries, religions have been used to defend the male chauvinism. In another hand, religion could also be as an agent for tolerance and understanding of others.

There is a positive correlation between religion and stereotypical thinking (Wulff, 1991). People might have the tendency to believe that every individual attending church on regular basis is a person with tolerance and that is not necessarily the case. Research shows that attending church 2 or 3 times a week can make a person develop prejudice towards others individuals outside their church circle (Saunders, 2001).

There is a link between religion and prejudice, the more someone attends church, the more likely they are to demonstrate stereotypical thinking against other groups like LGBT, feminists, etc. (Herek, 1987). There is also a positive correlation between being a member of a religious group and prejudice, (Batson,1993), which is contradictory to beliefs that religion teaches tolerance (Coward, 1986). There also instances where religion has been used by fundamentalists as justification for terrorist attacks and oppression of other groups, and these individuals tend to feel their beliefs are fact, rather than opinion (Hunsberger & Jackson, 2005).

People attending church two or more times a week are more inclined to have more prejudice against others (Sanders, 2001) and this could be due to differences in the religious doctrines taught by religious leaders. Studies correlating religious beliefs and practice with attitudes toward social issues have reported that religious people show greater intolerance of different groups and no more humanitarian concern than non-religious groups (Batson, 1976).

Religious vary widely in their beliefs about things like Jesus as a messiah, Mary as a holy figure however, pretty consistently they take a stand against things like same sex marriage, homosexuality, abortion etc. The misunderstanding between what rights means and where discrimination begins might not very clear to certain religion groups.

This study aims to investigate how religion influences stereotypical thinking towards certain groups and the implications and division in today’s society. I predict that individuals who attend church more often are related to greater stereotypical thinking or prejudice against other non-religious groups. Religion has influence in global policies and governments. The change in mentality and brain washing of certain extremist religious groups.

This study is conducted using the American National Election Survey (2016), whose mission is to explain election outcomes and the reasoning behind it by providing the essential data and the support of the data. There were (N= ) of participants. Stereotypes were measured using two items from the stereotype scale implemented in the original ANES survey. Participants were asked to rate how well the words “lazy” and “violent” matched each group based on a Likert-type scale ranging from 1 (Extremely well) to 5 (Not at all well). Higher scores indicated less stereotype.

Effect and Influence of Religion on People’s Prejudice. (2021, May 14). Retrieved from https://papersowl.com/examples/effect-and-influence-of-religion-on-peoples-prejudice/

Influence of Parents on Teenagers

The Love/Hate Relationship between Religion and the LBGTQIA Community