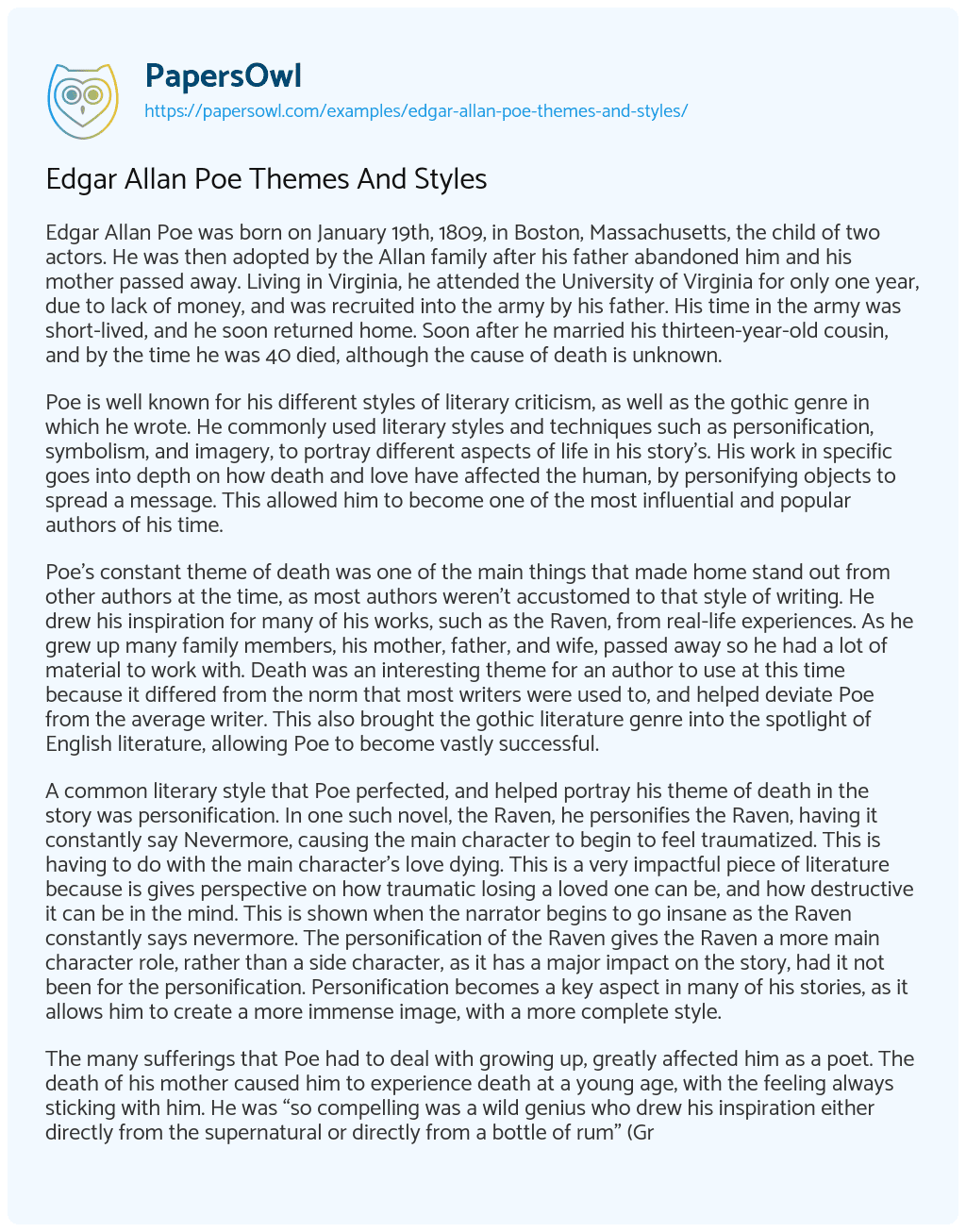 Edgar Allan Poe was born on January 19th, 1809, in Boston, Massachusetts, the child of two actors. He was then adopted by the Allan family after his father abandoned him and his mother passed away. Living in Virginia, he attended the University of Virginia for only one year, due to lack of money, and was recruited into the army by his father. His time in the army was short-lived, and he soon returned home. Soon after he married his thirteen-year-old cousin, and by the time he was 40 died, although the cause of death is unknown.

Poe is well known for his different styles of literary criticism, as well as the gothic genre in which he wrote. He commonly used literary styles and techniques such as personification, symbolism, and imagery, to portray different aspects of life in his story’s. His work in specific goes into depth on how death and love have affected the human, by personifying objects to spread a message. This allowed him to become one of the most influential and popular authors of his time.

Poe’s constant theme of death was one of the main things that made home stand out from other authors at the time, as most authors weren’t accustomed to that style of writing. He drew his inspiration for many of his works, such as the Raven, from real-life experiences. As he grew up many family members, his mother, father, and wife, passed away so he had a lot of material to work with. Death was an interesting theme for an author to use at this time because it differed from the norm that most writers were used to, and helped deviate Poe from the average writer. This also brought the gothic literature genre into the spotlight of English literature, allowing Poe to become vastly successful.

A common literary style that Poe perfected, and helped portray his theme of death in the story was personification. In one such novel, the Raven, he personifies the Raven, having it constantly say Nevermore, causing the main character to begin to feel traumatized. This is having to do with the main character’s love dying. This is a very impactful piece of literature because is gives perspective on how traumatic losing a loved one can be, and how destructive it can be in the mind. This is shown when the narrator begins to go insane as the Raven constantly says nevermore. The personification of the Raven gives the Raven a more main character role, rather than a side character, as it has a major impact on the story, had it not been for the personification. Personification becomes a key aspect in many of his stories, as it allows him to create a more immense image, with a more complete style.

The many sufferings that Poe had to deal with growing up, greatly affected him as a poet. The death of his mother caused him to experience death at a young age, with the feeling always sticking with him. He was “so compelling was a wild genius who drew his inspiration either directly from the supernatural or directly from a bottle of rum” (Green 275). Through the death of his wife, he was able to gain inspiration for many stories. One of which, The Raven, is known as one of the greatest poems of all time, and is still popular today. The abandonment of his father allowed him to tap into his inner loneliness and solitude when writing his poem and helped him develop a new theme that was not commonly used among authors.

The way Poe used Death, with the pain and intensity of its internal reality, is unmatched by any author. His short stories express the dread of human life, the nervousness of life, and the fear of death, and create the ultimate spectacle of death. He manifests memories in a way that seems like there will soon be happiness, “Yet it permeates the poems perhaps even more than the tales for there is nothing grotesque or fantastic about them” (Zayed 280). Through his stories, Poe shows the readers that death is everywhere, as well as how it is unavoidable. When using death in his poetry rather than his stories, he makes death less aggressive, without the hero dealing with a tragic struggle.

The Raven had many literary styles it that helped make it so impactful. A minor one that is less important than personification was repetition. Poe used repetition to help convey the Raven, and allow it to become a character. By having the Raven constantly repeat the word “Nevermore” he gave the Raven an identity, that had a major impact on the narrator of the story. Repetition also informed the author that this was an important part of the story, and caused focus to what was being repeated, as it clearly was necessary to the story.

The symbol of the mistress in the Raven was very prominent and was a key part of the story. She represented the love and happiness of the character. This also shows how since she died, he has not experienced these common pleasures. The death of his mistress has inspired him vastly, allowing him to show how much death can impact a character’s life. It also shows that through his experience with death, he has become less and less of who he was before, causing him to turn to alcohol. Although this is a bad thing, this self-deprivation allowed him to write stories with that same feeling, a difficult task for the average poet.

Poe’s Gothic tales often consist of characters who wage internal conflicts. They do this by creating imaginary alter egos or they will assume alternate personalities, that differ from their norm. In “William Wilson”, the split personality takes the form of the narrator’s imagined double, as he tracks the narrator throughout Europe. The narrator’s sense of an articulate identity is threatened by this rival, as it is shown that the character is unable to escape from his own superfluous characteristics. The narrator used the alternate personality to deviate from his own insanity. His inner upheaval is projected onto his to alter ego, which allows him to forget that the trouble originates within him. The ultimate parallel and irrefutable comparability to the narrator, causes this alter ego to become a permanent rival of the self.

Oftentimes in his stories, Poe allows the concept of memory to bring the dead back to life. Similar to the common literary theme of this era, Poe contorted it by bringing the dead literally back to life, something not usually seen in stories. He uses this memory as the trigger to reawaken the dead, which is the central theme of these stories, with the dead most often being women. By combining the reawakening of the dead with the loss of a loved one, he creates a generally unique story, that is difficult for many writers to create.

Poe most notably used this theme in his story “Ligeia”. “Ligeia” is one of Poe’s less known stories, even though it is the perfect example of what he wrote about, and the themes that he used. “Ligeia,” tells the story of an unnamed narrator, who cannot recount how he met his wife. A key characteristic of his wife is that he says her hair is “as black as a Raven”. Ravens, as most people know, is a common symbol for Poe, that he uses in many works, most notably “The Raven”. His wife eventually dies, and he remarries another woman. She eventually dies as well, but he keeps her corpse. This is significant because her corpse comes back to life, and dies again, and later that night when it comes back to life, it is his first wife Ligeia, rather than the second wife.

The motive of this story is that the husband cannot stop thinking about his first wife, Ligeia, even after her death and his remarriage. When his second wife Rowena begins to die, these reprised memories come back to life and take a physical form. These memories eventually become so intense that he sees Ligeia in the bedroom that he shares with his new wife, showing how he never forgot about her. Although most people who read Ligeia believe that Poe was emphasizing his own psychological conflicts, others “examine the tale as a consciously contrived story of the supernatural with, possibly, allegorical overtones” (Shi 134).

“The Cask of Amontillado” by Edgar Allan Poe Analyis