Decision by the Supreme Court of United States 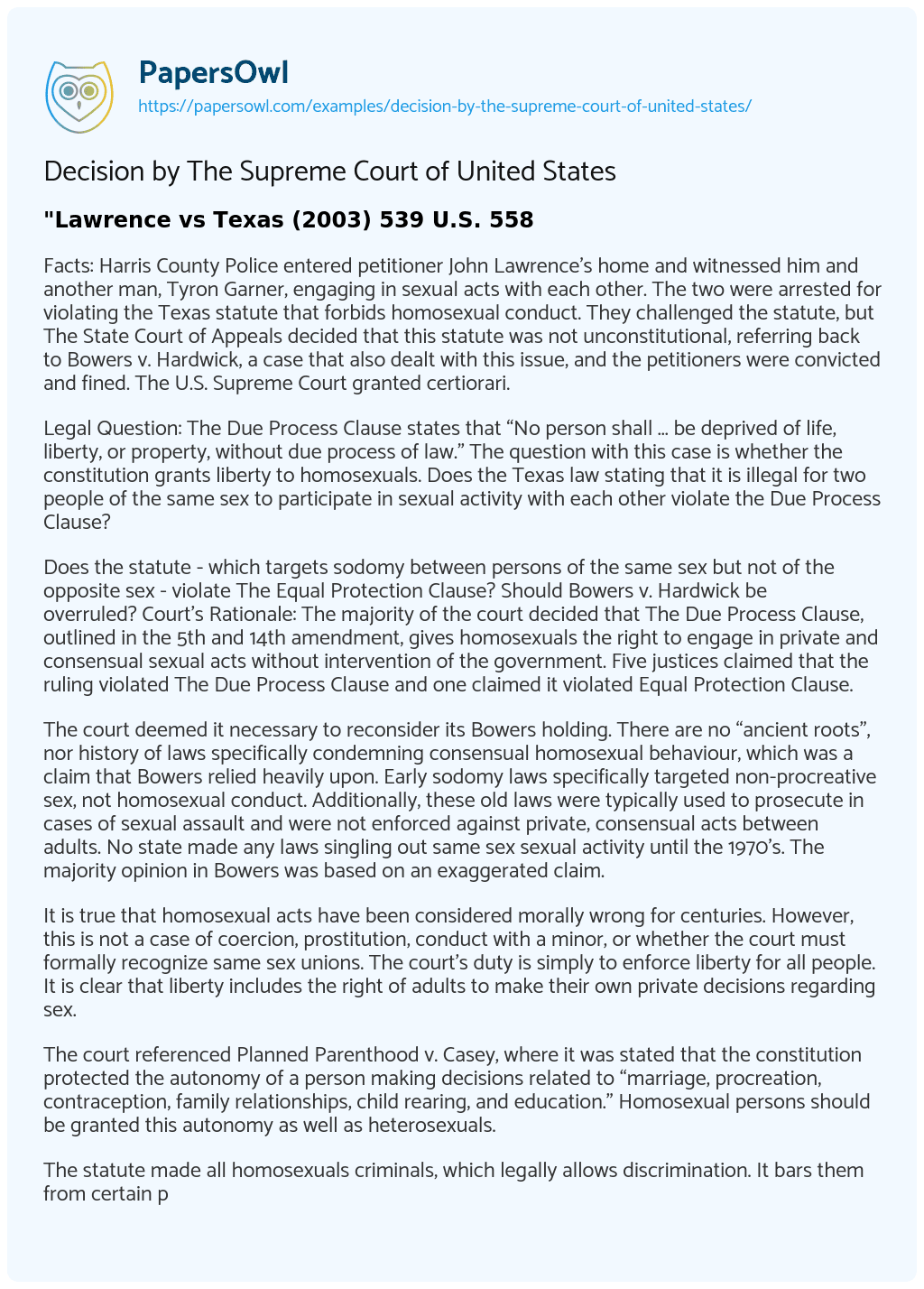 Facts: Harris County Police entered petitioner John Lawrence’s home and witnessed him and another man, Tyron Garner, engaging in sexual acts with each other. The two were arrested for violating the Texas statute that forbids homosexual conduct. They challenged the statute, but The State Court of Appeals decided that this statute was not unconstitutional, referring back to Bowers v. Hardwick, a case that also dealt with this issue, and the petitioners were convicted and fined. The U.S. Supreme Court granted certiorari.

Legal Question: The Due Process Clause states that “No person shall … be deprived of life, liberty, or property, without due process of law.” The question with this case is whether the constitution grants liberty to homosexuals. Does the Texas law stating that it is illegal for two people of the same sex to participate in sexual activity with each other violate the Due Process Clause?

Does the statute – which targets sodomy between persons of the same sex but not of the opposite sex – violate The Equal Protection Clause? Should Bowers v. Hardwick be overruled? Court’s Rationale: The majority of the court decided that The Due Process Clause, outlined in the 5th and 14th amendment, gives homosexuals the right to engage in private and consensual sexual acts without intervention of the government. Five justices claimed that the ruling violated The Due Process Clause and one claimed it violated Equal Protection Clause.

The court deemed it necessary to reconsider its Bowers holding. There are no “ancient roots”, nor history of laws specifically condemning consensual homosexual behaviour, which was a claim that Bowers relied heavily upon. Early sodomy laws specifically targeted non-procreative sex, not homosexual conduct. Additionally, these old laws were typically used to prosecute in cases of sexual assault and were not enforced against private, consensual acts between adults. No state made any laws singling out same sex sexual activity until the 1970’s. The majority opinion in Bowers was based on an exaggerated claim.

It is true that homosexual acts have been considered morally wrong for centuries. However, this is not a case of coercion, prostitution, conduct with a minor, or whether the court must formally recognize same sex unions. The court’s duty is simply to enforce liberty for all people. It is clear that liberty includes the right of adults to make their own private decisions regarding sex.

The court referenced Planned Parenthood v. Casey, where it was stated that the constitution protected the autonomy of a person making decisions related to “marriage, procreation, contraception, family relationships, child rearing, and education.” Homosexual persons should be granted this autonomy as well as heterosexuals.

The statute made all homosexuals criminals, which legally allows discrimination. It bars them from certain professions and requires them to register as sex offenders in some states. Moral disapproval is not a legitimate state interest and it does not justify this statute. Bowers was incorrect when it was decided.

Justice O’Connor concurred that the statute was unconstitutional, but had a different rationale. She did not support overturning Bowers, but stated that the statute did violate the Equal Protection Clause because it required that same sex sodomy be treated differently than male-female sodomy. A law that criminalized both might be constitutional, but would not be tolerated. The state cannot single out one class of people to be punished for a crime that only applies to them with no state interest other than moral disapproval.

Significance of Case: The power of the government to intervene in private sexual affairs was decreased with this ruling. The case overturned sodomy laws in 13 other U.S. states. This made same sex sexual activity legal in every U.S. state. It was celebrated by LGBT organizations and helped encourage the granting of other rights to homosexuals. Just a few months later, Massachusetts granted same sex couples the right to marry and 12 years later, in the case Obergefell v. Hodges, they were given the right to marry in all 50 states.

This case strengthened the rights of the individual in that it allowed homosexuals freedom to have sexual relationships like heterosexuals have always been allowed to. It also contributed to destigmatizing them and led to greater social acceptance. Gay and Lesbian people were no longer criminals by default.

The decision received plenty of criticism from religious groups and organizations who feared that it would lead to the legalization of same sex marriage, and a dissolution of the right of churches and religious schools to discriminate against hiring LGBT individuals. They also claimed that the ruling made it difficult to say that laws disallowing bestiality, incest, and bigamy were constitutional.”

Decision by The Supreme Court of United States. (2021, Apr 08). Retrieved from https://papersowl.com/examples/decision-by-the-supreme-court-of-united-states/

How did Alabamians Respond to the U.S. Supreme Court Decision Brown V. Board?

Supreme Court of the United States