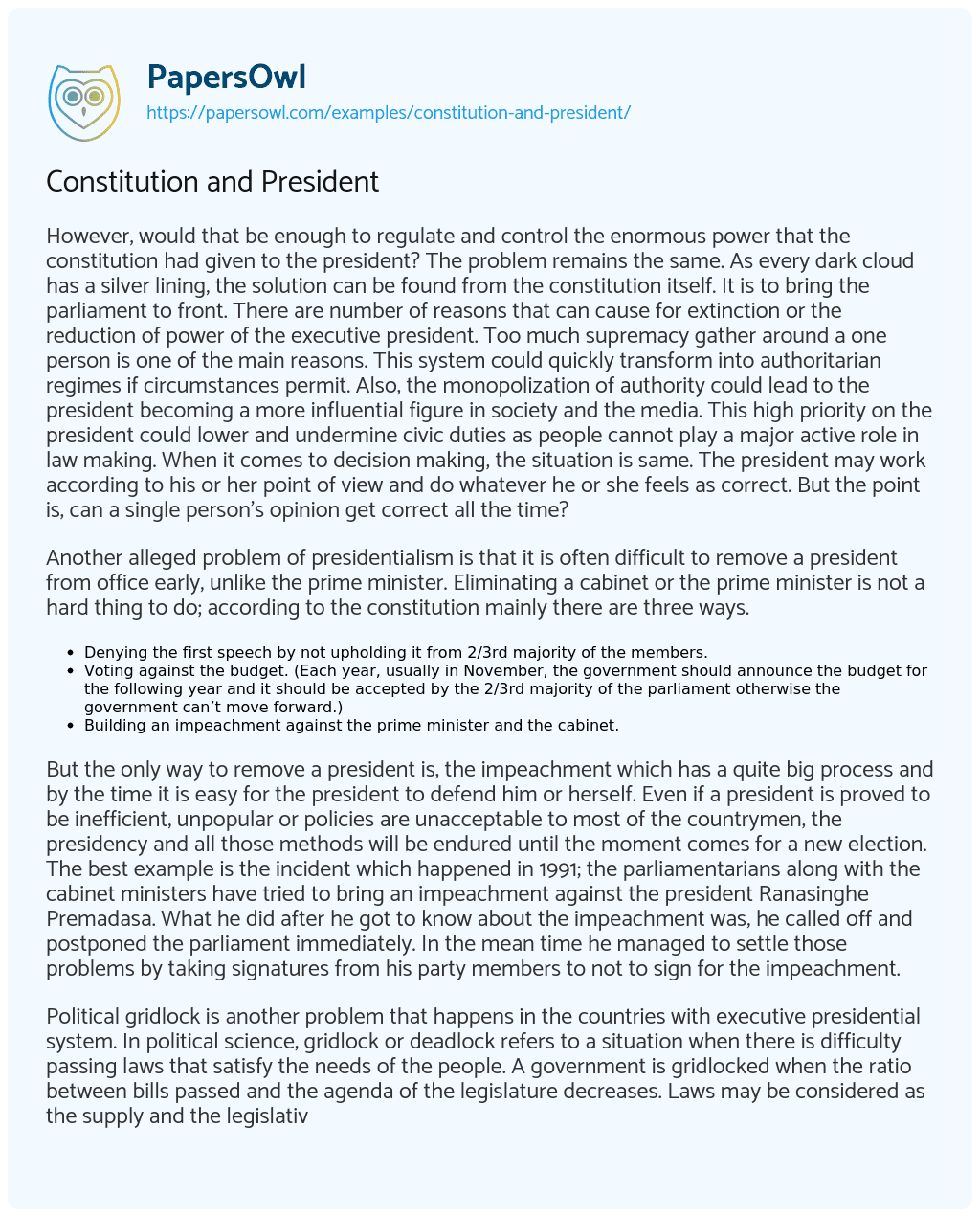 However, would that be enough to regulate and control the enormous power that the constitution had given to the president? The problem remains the same. As every dark cloud has a silver lining, the solution can be found from the constitution itself. It is to bring the parliament to front. There are number of reasons that can cause for extinction or the reduction of power of the executive president. Too much supremacy gather around a one person is one of the main reasons. This system could quickly transform into authoritarian regimes if circumstances permit. Also, the monopolization of authority could lead to the president becoming a more influential figure in society and the media. This high priority on the president could lower and undermine civic duties as people cannot play a major active role in law making. When it comes to decision making, the situation is same. The president may work according to his or her point of view and do whatever he or she feels as correct. But the point is, can a single person’s opinion get correct all the time?

Another alleged problem of presidentialism is that it is often difficult to remove a president from office early, unlike the prime minister. Eliminating a cabinet or the prime minister is not a hard thing to do; according to the constitution mainly there are three ways.

But the only way to remove a president is, the impeachment which has a quite big process and by the time it is easy for the president to defend him or herself. Even if a president is proved to be inefficient, unpopular or policies are unacceptable to most of the countrymen, the presidency and all those methods will be endured until the moment comes for a new election. The best example is the incident which happened in 1991; the parliamentarians along with the cabinet ministers have tried to bring an impeachment against the president Ranasinghe Premadasa. What he did after he got to know about the impeachment was, he called off and postponed the parliament immediately. In the mean time he managed to settle those problems by taking signatures from his party members to not to sign for the impeachment.

Political gridlock is another problem that happens in the countries with executive presidential system. In political science, gridlock or deadlock refers to a situation when there is difficulty passing laws that satisfy the needs of the people. A government is gridlocked when the ratio between bills passed and the agenda of the legislature decreases. Laws may be considered as the supply and the legislative agenda as demand. Gridlock can occur when two legislative houses, or the executive branch and the legislature are controlled by different political parties, or otherwise cannot agree. So many political scientists speak of the failure of presidentialism. Because the separation of powers of a presidential system often creates undesirable long-term political gridlock and instability whenever the president and the legislative majority are from different parties. This is common because the electorate often expects more rapid results than are possible from new policies and switches to a different party at the next election. These critics, including Juan Linz, argue that this inherent political instability can cause democracies to fail, as seen in such cases as Brazil, Chile as well as Sri Lanka. When it comes to Sri Lanka in 2001 this sort of situation has occurred. The executive power was with her excellency Chandrika Kumaratunga who was from SLFP and honorable Ranil Wickremasinghe who was from UNP appointed as the prime minister. The result was, after around one year the parliament has dissolved by the president with her executive power and the country faced an anarchy because of that. Basically, the democracy has concealed.

Though, the things have happened in that way, someone can argue by saying the democracy is not correct all the time. It is criticized for not offering enough political stability. As governments are frequently voted on and off there tends to be frequent changes in the policies of democratic countries both locally and internationally. Even if a political party maintains power, vociferous, headline grabbing protests and harsh criticism from the popular media are often enough to force sudden, unexpected political change. Frequent policy changes regarding business and immigration are likely to deter investment and slow economic growth. As an example, colonel Muammar Gaddafi’s ruling period in Libya can be taken. For this reason, many world-renowned characters such as Winston S. Churchill have put forward the idea that democracy is undesirable for a developing country in which economic growth and the reduction of poverty are top priorities.

This opportunist alliance not only has the handicap of having to cater to too many ideologically opposing factions, but it is usually short lived since any perceived or actual imbalance in the treatment of alliance partners, or changes to leadership in the coalition partners themselves, can very easily result in the coalition partner withdrawing its support from the government. Biased media has been accused of causing political instability, resulting in the obstruction of democracy, rather than its promotion.

Democratic Irony of the US Constitution

Andrew Jackson and other President