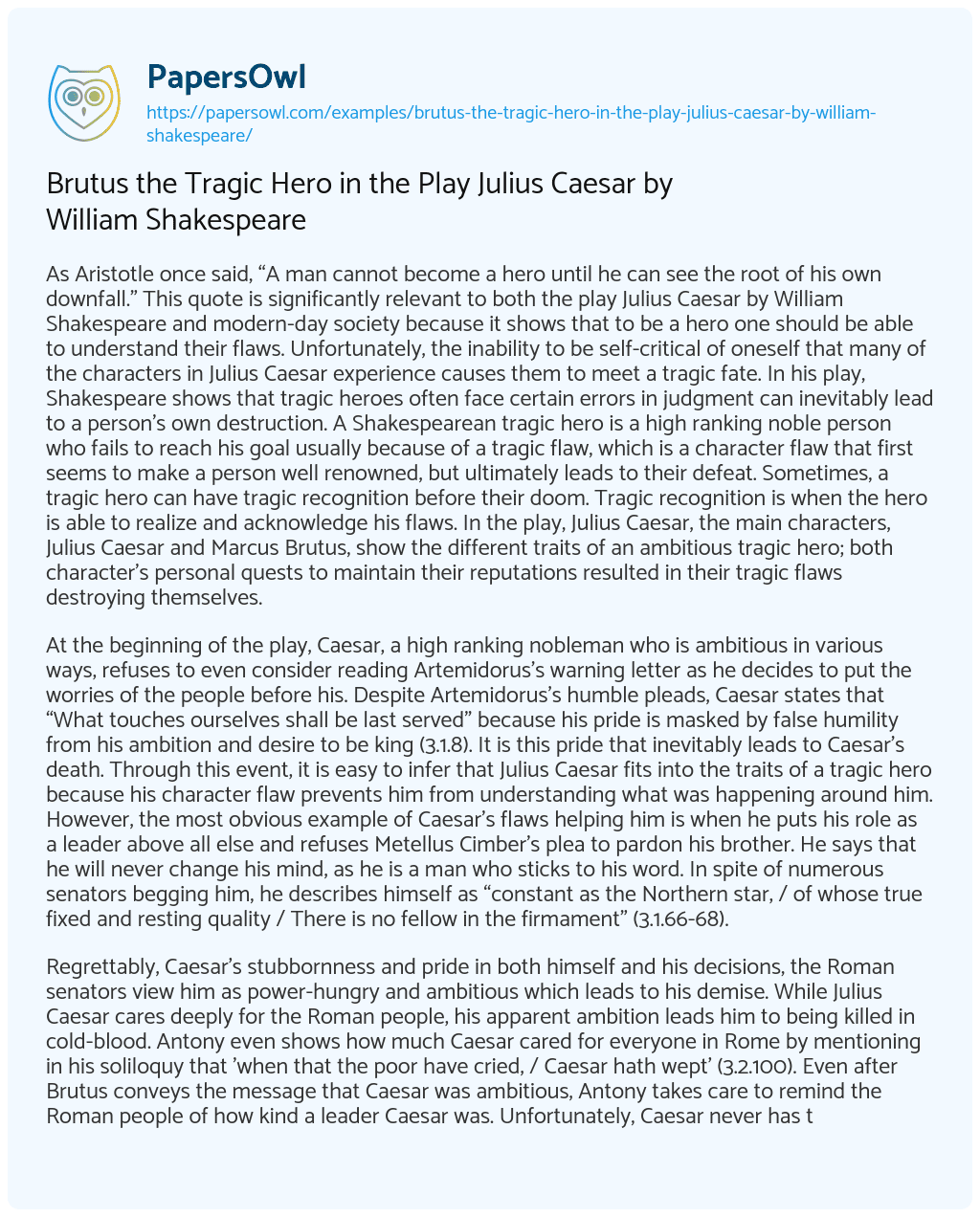 As Aristotle once said, “A man cannot become a hero until he can see the root of his own downfall.” This quote is significantly relevant to both the play Julius Caesar by William Shakespeare and modern-day society because it shows that to be a hero one should be able to understand their flaws. Unfortunately, the inability to be self-critical of oneself that many of the characters in Julius Caesar experience causes them to meet a tragic fate. In his play, Shakespeare shows that tragic heroes often face certain errors in judgment can inevitably lead to a person’s own destruction. A Shakespearean tragic hero is a high ranking noble person who fails to reach his goal usually because of a tragic flaw, which is a character flaw that first seems to make a person well renowned, but ultimately leads to their defeat. Sometimes, a tragic hero can have tragic recognition before their doom. Tragic recognition is when the hero is able to realize and acknowledge his flaws. In the play, Julius Caesar, the main characters, Julius Caesar and Marcus Brutus, show the different traits of an ambitious tragic hero; both character’s personal quests to maintain their reputations resulted in their tragic flaws destroying themselves.

At the beginning of the play, Caesar, a high ranking nobleman who is ambitious in various ways, refuses to even consider reading Artemidorus’s warning letter as he decides to put the worries of the people before his. Despite Artemidorus’s humble pleads, Caesar states that “What touches ourselves shall be last served” because his pride is masked by false humility from his ambition and desire to be king (3.1.8). It is this pride that inevitably leads to Caesar’s death. Through this event, it is easy to infer that Julius Caesar fits into the traits of a tragic hero because his character flaw prevents him from understanding what was happening around him. However, the most obvious example of Caesar’s flaws helping him is when he puts his role as a leader above all else and refuses Metellus Cimber’s plea to pardon his brother. He says that he will never change his mind, as he is a man who sticks to his word. In spite of numerous senators begging him, he describes himself as “constant as the Northern star, / of whose true fixed and resting quality / There is no fellow in the firmament” (3.1.66-68).

Regrettably, Caesar’s stubbornness and pride in both himself and his decisions, the Roman senators view him as power-hungry and ambitious which leads to his demise. While Julius Caesar cares deeply for the Roman people, his apparent ambition leads him to being killed in cold-blood. Antony even shows how much Caesar cared for everyone in Rome by mentioning in his soliloquy that ‘when that the poor have cried, / Caesar hath wept’ (3.2.100). Even after Brutus conveys the message that Caesar was ambitious, Antony takes care to remind the Roman people of how kind a leader Caesar was. Unfortunately, Caesar never has the opportunity to experience a tragic recognition that helps him understand that his fatal flaw was his arrogance and ambition. Although, in his final moments, Caesar realizes that his closest friend, Brutus, was the one who betrayed him.

In the play, Shakespeare give us two possible tragic heroes, but shows Brutus to be a better choice because Marcus Brutus fits the role of a tragic hero as he is an eminent leader and noble citizen of Rome whose downfall occurs due to a fatal flaw in his own character; a flaw which is typically considered to be a exceptional quality to possess. Brutus is a well respected man senator whose love for Rome is undoubted because his integrity is strong and his principles are firm. When Brutus tells Cassius, “For let the gods so speed me as I love / The name of honor more than I fear death,” (1.2.95-96) it shows that he values honor above all else. His sense of honor and love for his country draws him into the conspiracy to murder Caesar, and once he becomes a part of it, his downfall becomes inevitable. Brutus joins the conspiracy under the impression that he is preventing Caesar’s tyranny and saving Rome because he had a sense of loyalty for his country that surpasses his loyalty to his friend, Caesar. He also trusts the motives of the other conspirators, as he believes that all the conspirators are assassinating Caesar not for their selfish needs, but for the urgency to help the country.

Brutus is easily manipulated by Cassius through carefully crafted deception because he is unable to recognize fraud within others. Brutus fits the role of tragic hero as well, because soon after the assassination, Brutus is the only character who has the opportunity to have tragic recognition, which is a moment that helps him acknowledge his mistake. When Brutus recognizes that he has been manipulated by the conspirators, he is finally able to understand that their intentions are not pure and that it is his fault for being too naive and blindly trusting them. After realizing the truth behind the murder, Brutus warns Cassius by saying, “You have done that you should be sorry for” (4.3.74). Throughout this quote, Brutus’s remorse towards Caesar is shown as he realizes his mistake by blindly trusting the conspirators and murdering Caesar. Brutus’s downfall occurs quickly thereafter because he commits suicide to avoid capture in a battle against Caesar’s friend, Mark Antony. At the play’s conclusion, however, Shakespeare reminds his audience that one should be careful with making assumptions about their own strengths, as it can lead to a tragedy similar to Brutus.

In Julius Caesar, Caesar’s fatal flaw is shown to be his excessive self-pride, which makes him ignore warnings from the gods and thus invites havoc. One example is when Caesar refuses to listen to the soothsayer who warns him to beware the ides of March, Caesar responds by saying “He is a dreamer. Let us leave him. Pass” (1.2.29). His pride stops him from stepping down and listening to the words of a common and wise man. This same pride and ambition to gain the crown, makes him ignore Calpurnia’s plea to stay home. Without taking into consideration all of Calpurnia’s pleas, he says that “Caesar shall forth. The things that threatened me / Ne’er looked but on my back. When they shall see / The face of Caesar, they are vanished” (2.2.10-12). Due to the thought of what other people might think he is, he hurries to his fate instead of listening to the people around him, which may have saved his life. Caesar’s ambitions stand out compared to Brutus’s honor because of how he works to keep his reputation intact, but at the same time shows that he does not care as much about Rome as he does himself. On the other hand, Brutus’s honor is much more difficult to notice as it is a trait which is considered to be a good virture. Moreover, Brutus contradicts himself in the name of honor, when he sacrifices a great friend for what he thinks will help improve Rome. Ultimately, both Caesar and Brutus are killed due to their flaws and inability to recognize them in the first place.

Although Julius Caesar is a tragic play, it teaches us that even in real life, there is no such thing as the perfect person because everyone has flaws that make us human. Sometimes, it can be difficult to decide on certain factors, but when one is able to make clear judgments on negative issues such as our flaws, there is a possibility to change for the better. For example, there will be times when one is criticized by many for a certain reason, but if one takes a moment to analyze where they went wrong, they improve and correct themselves for the better. Essentially, we must try to be the best version of ourselves while being open-minded so that we may prevent ourselves from being blinded from our own shortcomings.

Brutus the Tragic Hero in the Play Julius Caesar by William Shakespeare. (2021, Mar 25). Retrieved from https://papersowl.com/examples/brutus-the-tragic-hero-in-the-play-julius-caesar-by-william-shakespeare/

William Shakespeare about the Overthrow of Julius Caesar

The Tragedy of Julius Caesar