Anything is Possible if you have Enough Nerves 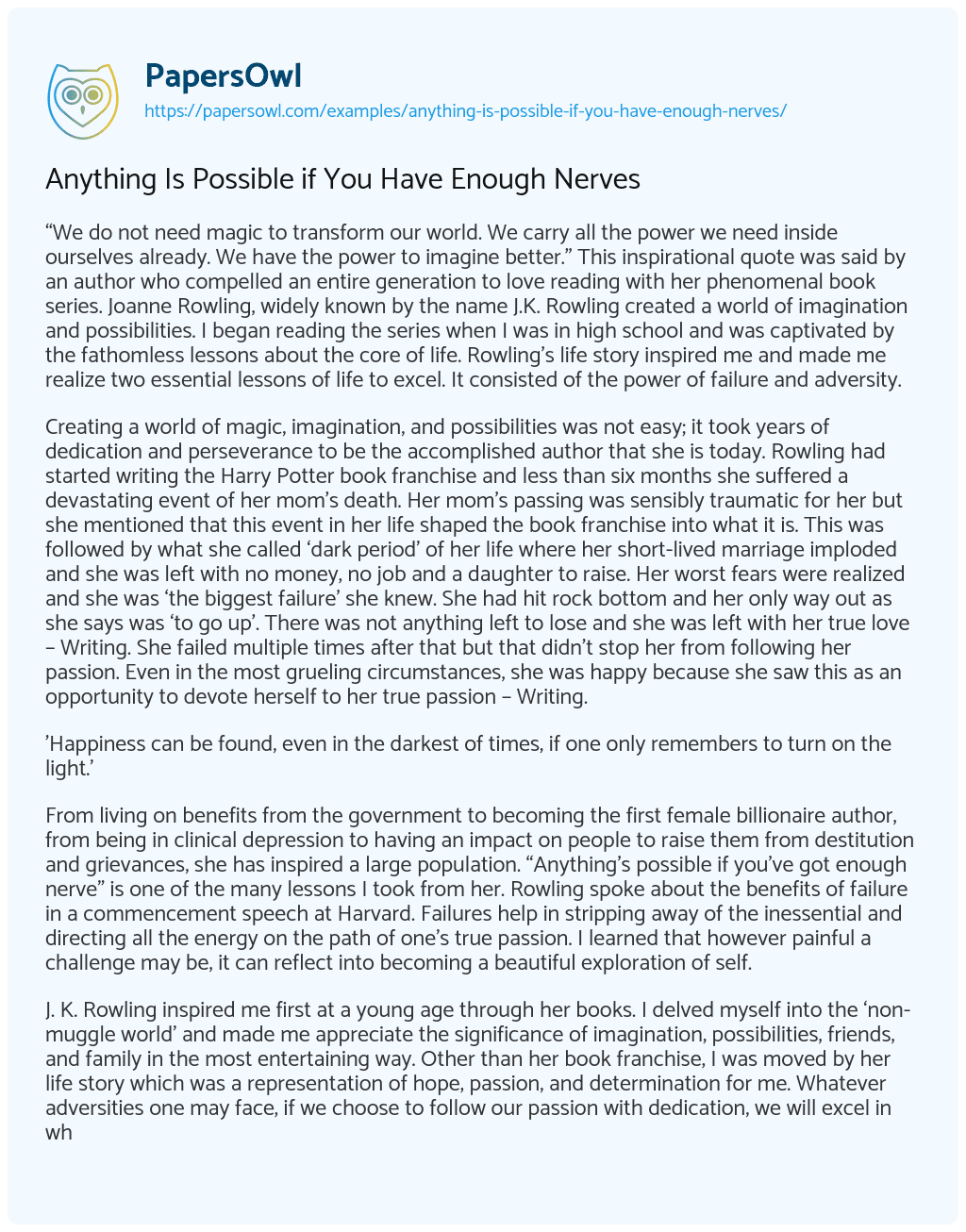 “We do not need magic to transform our world. We carry all the power we need inside ourselves already. We have the power to imagine better.” This inspirational quote was said by an author who compelled an entire generation to love reading with her phenomenal book series. Joanne Rowling, widely known by the name J.K. Rowling created a world of imagination and possibilities. I began reading the series when I was in high school and was captivated by the fathomless lessons about the core of life. Rowling’s life story inspired me and made me realize two essential lessons of life to excel. It consisted of the power of failure and adversity.

Creating a world of magic, imagination, and possibilities was not easy; it took years of dedication and perseverance to be the accomplished author that she is today. Rowling had started writing the Harry Potter book franchise and less than six months she suffered a devastating event of her mom’s death. Her mom’s passing was sensibly traumatic for her but she mentioned that this event in her life shaped the book franchise into what it is. This was followed by what she called ‘dark period’ of her life where her short-lived marriage imploded and she was left with no money, no job and a daughter to raise. Her worst fears were realized and she was ‘the biggest failure’ she knew. She had hit rock bottom and her only way out as she says was ‘to go up’. There was not anything left to lose and she was left with her true love – Writing. She failed multiple times after that but that didn’t stop her from following her passion. Even in the most grueling circumstances, she was happy because she saw this as an opportunity to devote herself to her true passion – Writing.

‘Happiness can be found, even in the darkest of times, if one only remembers to turn on the light.’

From living on benefits from the government to becoming the first female billionaire author, from being in clinical depression to having an impact on people to raise them from destitution and grievances, she has inspired a large population. “Anything’s possible if you’ve got enough nerve” is one of the many lessons I took from her. Rowling spoke about the benefits of failure in a commencement speech at Harvard. Failures help in stripping away of the inessential and directing all the energy on the path of one’s true passion. I learned that however painful a challenge may be, it can reflect into becoming a beautiful exploration of self.

J. K. Rowling inspired me first at a young age through her books. I delved myself into the ‘non-muggle world’ and made me appreciate the significance of imagination, possibilities, friends, and family in the most entertaining way. Other than her book franchise, I was moved by her life story which was a representation of hope, passion, and determination for me. Whatever adversities one may face, if we choose to follow our passion with dedication, we will excel in what we do. I hope to have the courage to follow my passion and excel as she did. Reaching her wavelength of success is my aspiration, but just following my passion for neurology and contributing to society will give me deep sense of gratitude.

“It is impossible to live without failing at something unless you live so cautiously that you might as well not have lived at all, in which case you have failed by default.”

Anything Is Possible if You Have Enough Nerves. (2021, Oct 20). Retrieved from https://papersowl.com/examples/anything-is-possible-if-you-have-enough-nerves/

Critical Book Review of the Giver by Lois Lowry