All Quiet on the Western Front – Paul Bäumer 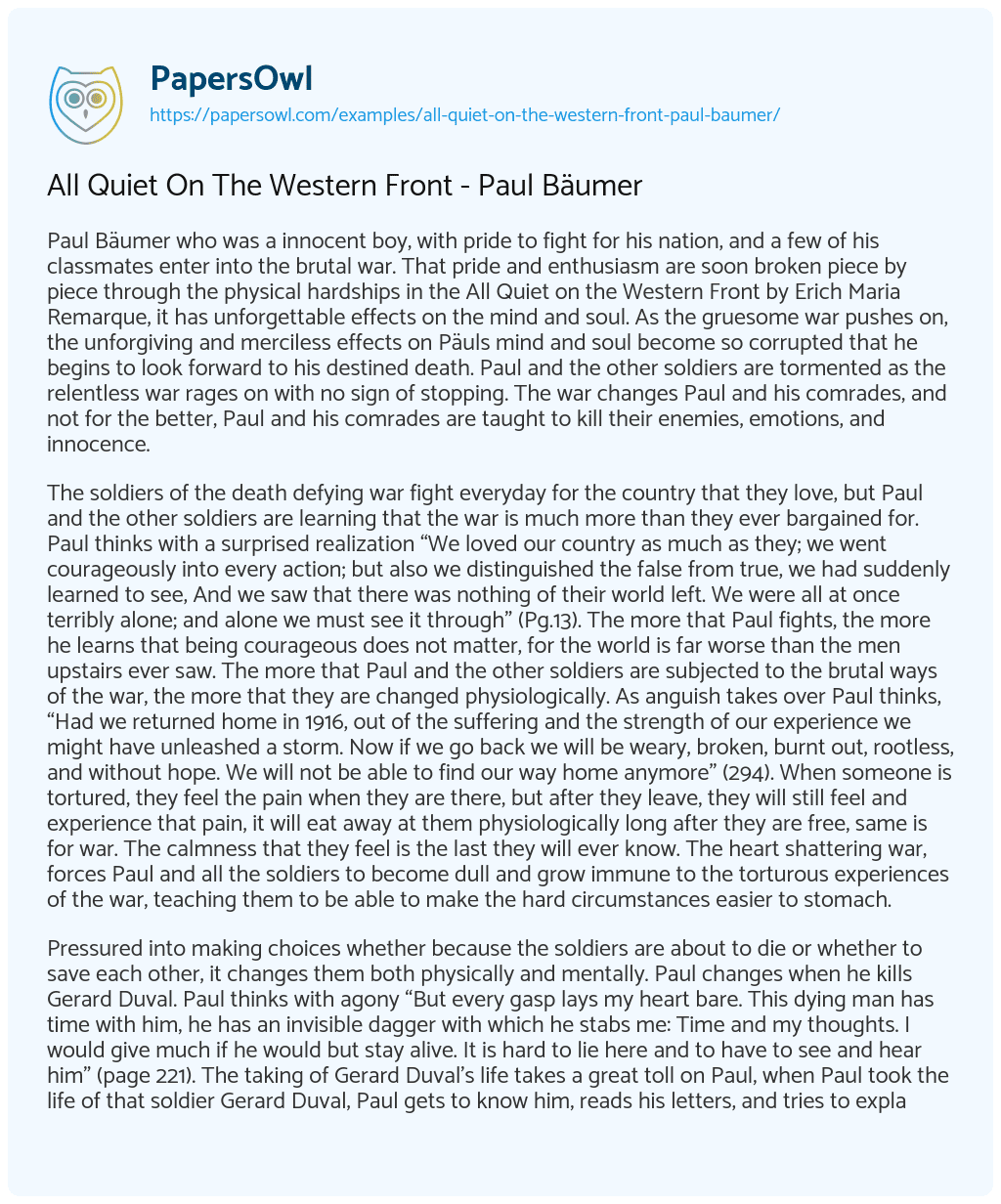 Paul Bäumer who was a innocent boy, with pride to fight for his nation, and a few of his classmates enter into the brutal war. That pride and enthusiasm are soon broken piece by piece through the physical hardships in the All Quiet on the Western Front by Erich Maria Remarque, it has unforgettable effects on the mind and soul. As the gruesome war pushes on, the unforgiving and merciless effects on Päuls mind and soul become so corrupted that he begins to look forward to his destined death. Paul and the other soldiers are tormented as the relentless war rages on with no sign of stopping. The war changes Paul and his comrades, and not for the better, Paul and his comrades are taught to kill their enemies, emotions, and innocence.

The soldiers of the death defying war fight everyday for the country that they love, but Paul and the other soldiers are learning that the war is much more than they ever bargained for. Paul thinks with a surprised realization “We loved our country as much as they; we went courageously into every action; but also we distinguished the false from true, we had suddenly learned to see, And we saw that there was nothing of their world left. We were all at once terribly alone; and alone we must see it through” (Pg.13). The more that Paul fights, the more he learns that being courageous does not matter, for the world is far worse than the men upstairs ever saw. The more that Paul and the other soldiers are subjected to the brutal ways of the war, the more that they are changed physiologically. As anguish takes over Paul thinks, “Had we returned home in 1916, out of the suffering and the strength of our experience we might have unleashed a storm. Now if we go back we will be weary, broken, burnt out, rootless, and without hope. We will not be able to find our way home anymore” (294). When someone is tortured, they feel the pain when they are there, but after they leave, they will still feel and experience that pain, it will eat away at them physiologically long after they are free, same is for war. The calmness that they feel is the last they will ever know. The heart shattering war, forces Paul and all the soldiers to become dull and grow immune to the torturous experiences of the war, teaching them to be able to make the hard circumstances easier to stomach.

Pressured into making choices whether because the soldiers are about to die or whether to save each other, it changes them both physically and mentally. Paul changes when he kills Gerard Duval. Paul thinks with agony “But every gasp lays my heart bare. This dying man has time with him, he has an invisible dagger with which he stabs me: Time and my thoughts. I would give much if he would but stay alive. It is hard to lie here and to have to see and hear him” (page 221). The taking of Gerard Duval’s life takes a great toll on Paul, when Paul took the life of that soldier Gerard Duval, Paul gets to know him, reads his letters, and tries to explain to the soldiers why he did what he did, but there is no going back from this, he’s killed now he learns to deal with the pain and guilt. It changes Paul, the death of Gerard Duval latches onto Paul’s soul, onto his thoughts and effects him in ways that can never be forgotten. Paul says with anguish, “It was only because I had to lie there with him so long” (Page 229). Sitting there while Gerard Duval is dying, learning about his past, getting a connection with him. The more a man experiences hardships, the more he becomes accustomed to said hardships. Paul says to himself “Parting from my friend Albert Kropp was very hard. But a man gets used to that sort of thing in the army” (page 269). The numbing effects of the brutal war is killing the humanity inside of Paul and the soldiers. The choice Paul makes of leaving his friend and comrade is a representation of him leaving behind another part of his humanity turning him from man to monster.

Through the unimaginable torments of the treacherous war Paul grows to feel less and less about one unforgivable act after another. Though Paul seals away his evil doings, it still changes him from the innocent and courageous soldier to a monster, which is in part of what pushes Paul to accept his early death. Someone turns him over with weariness, “He had fallen forward and lay on the earth as though sleeping. Turning him over one saw that he could not have suffered long; his face had an expression of calm, as though almost glad the end had come” (page 296). After fighting the forever lasting war, after losing friends, family, and comrades the end of the forever lasting war could not come soon enough, “”Let the months and years come, they can take nothing from me, they can take nothing more. I am so alone, and so without hope that I can confront them without fear. The life that has borne me through these years is still in my hands and my eyes. Whether I have subdued it, I know not. But so long as it is there it will seek its own way out, heedless of the will that is within me” (pg. 295). Losing everything Paul is ready to die, without fear, ready to be free. During the torturous war, all Paul and all of his comrades fought for survival, no longer caring whom the enemy only to kill them, but now none of that matters, they are free.

The men fight for their nation, family, friends and comrades, when they enter the gruesome war, they are young and courageous to fight, yet by the end, everyone who is still alive is ready to welcome death than be left alive and broken and scarred for life. Rather than living and losing their innocence, and courage and pride for their nation, Paul greets death with a calm expression, Paul is finally free.”

All Quiet On The Western Front - Paul Bäumer. (2021, Jun 16). Retrieved from https://papersowl.com/examples/all-quiet-on-the-western-front-paul-baumer/

Psychological Effects of War in all Quiet on the Western Front