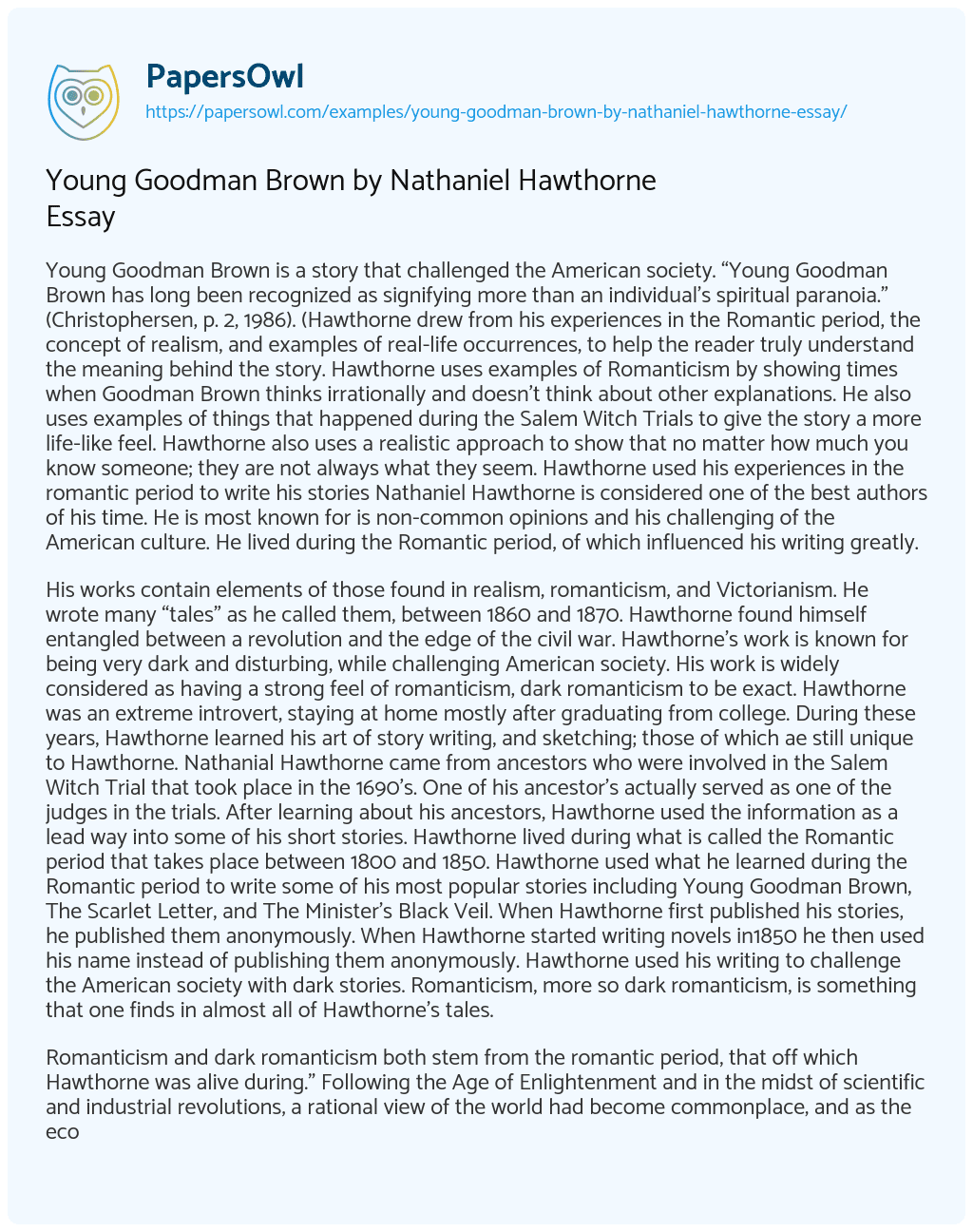 Young Goodman Brown is a story that challenged the American society. “Young Goodman Brown has long been recognized as signifying more than an individual’s spiritual paranoia.” (Christophersen, p. 2, 1986). (Hawthorne drew from his experiences in the Romantic period, the concept of realism, and examples of real-life occurrences, to help the reader truly understand the meaning behind the story. Hawthorne uses examples of Romanticism by showing times when Goodman Brown thinks irrationally and doesn’t think about other explanations. He also uses examples of things that happened during the Salem Witch Trials to give the story a more life-like feel. Hawthorne also uses a realistic approach to show that no matter how much you know someone; they are not always what they seem. Hawthorne used his experiences in the romantic period to write his stories Nathaniel Hawthorne is considered one of the best authors of his time. He is most known for is non-common opinions and his challenging of the American culture. He lived during the Romantic period, of which influenced his writing greatly.

His works contain elements of those found in realism, romanticism, and Victorianism. He wrote many “tales” as he called them, between 1860 and 1870. Hawthorne found himself entangled between a revolution and the edge of the civil war. Hawthorne’s work is known for being very dark and disturbing, while challenging American society. His work is widely considered as having a strong feel of romanticism, dark romanticism to be exact. Hawthorne was an extreme introvert, staying at home mostly after graduating from college. During these years, Hawthorne learned his art of story writing, and sketching; those of which ae still unique to Hawthorne. Nathanial Hawthorne came from ancestors who were involved in the Salem Witch Trial that took place in the 1690’s. One of his ancestor’s actually served as one of the judges in the trials. After learning about his ancestors, Hawthorne used the information as a lead way into some of his short stories. Hawthorne lived during what is called the Romantic period that takes place between 1800 and 1850. Hawthorne used what he learned during the Romantic period to write some of his most popular stories including Young Goodman Brown, The Scarlet Letter, and The Minister’s Black Veil. When Hawthorne first published his stories, he published them anonymously. When Hawthorne started writing novels in1850 he then used his name instead of publishing them anonymously. Hawthorne used his writing to challenge the American society with dark stories. Romanticism, more so dark romanticism, is something that one finds in almost all of Hawthorne’s tales.

Romanticism and dark romanticism both stem from the romantic period, that off which Hawthorne was alive during.” Following the Age of Enlightenment and in the midst of scientific and industrial revolutions, a rational view of the world had become commonplace, and as the economy shifted from agricultural to industrial, there was less attention paid to the individual” (Palladino, p. 2, 2010) The romantic period was filled with art, music and literature. It went on in the 18th century, but it peaked from 1800 to 1850. During the romantic period Hawthorne go his inspiration and stuck with the writing style for the rest of his pieces of literature. Hawthorne also was not afraid to use a lot of realism in his stories. Realism took place in American literature from 1860 to 1890. The point of realism is to take out the fantasy and fairy tales in stories and replace it with the real problems and scenarios in the American society. Young Goodman Brown is a piece of literature from Nathanial Hawthorne the shocked his audiences. Its about a young man who goes on a trip into the woods. While he is there, he discovers that many of the people that he knows and looks up to are in some way affiliated with Satan. Nathanial Hawthorne then goes even further to explain and draw out the devil worshiping service, one of which he connects to a church sermon. Hawthorne uses his experiences with romanticism to help show the struggle that Goodman Brown is facing in his fight between good and evil. Hawthorne also uses romanticism to show Goodman Brown’s intuition throughout the story. Another big part of Hawthorne’s story, Young Goodman Brown, is his use of realism. Hawthorne steps away from the fantasy scene to create something that is truly real and challenges the face of American society.

Throughout the story Young Goodman Brown, Goodman Brown finds himself in the struggle between good and evil. Due to the fact that Hawthorne lived during the romantic period, he used that greatly in his work. Hawthorne chose to challenge the American culture and write about something that would normally not be accepted. An example of Hawthorne using the Romantics, is when Hawthorne spoke of Goodman Brown’s intuition. When Hawthorne spoke of Brown’s intuition, he played into the readers emotions and made the reader feel as if they knew Goodman Brown. Throughout the story, Hawthorne uses romanticism to show the reader just how much Brown wants to be good, even though the rest of his family is turning out to be bad. Throughout the story Goodman Brown faces situations that do not give him much time to react and make a rational decision. An example of this is when he first finds the pink ribbon, just like the one that his wife wears, in a tree. While the ribbon could be Faith’s, Goodman doesn’t think about the fact that the pink ribbon could be another women’s, or that other women might wear pink ribbons. This is an example on Goodman Brown not being able to push down his intuition. Hawthorne also uses examples of what happened in the past to create a sense of realism in the story. “‘Young Goodman Brown’ is set in this dark period of Puritan history. The story makes reference to two historical figures from the witch trials, Goody Cloyse and Goody Cory, as well to another historical incident, the lashing of a Quaker woman which occurred in Salem in 1693. Reading Goodman Brown’s dissent into darkness and distrust with these references in mind, we are reminded of the sad reality that an overzealous desire for goodness and purity can be so perverted as to ultimately result in violence and death.” (Becnel, p.1, 2006). By using these examples of real events, Hawthorne is able to draw the reader in and help them understand what was going on in the time period.

This also creates a sense of realism to the story because of the actual facts that the story holds. Hawthorne lastly uses the concept of realism to create a big effect in his story. He uses the fact that everything is not what it seems to create a longer lasting impact on his audience. Goodman Brown learns that everyone he knows, even those he loves, are not who they seem to be and in someway affiliated with the devil. After finding out that those he once looked up to were not as good as he once thought, Goodman begins to lose his faith in those around him. This makes the reader gain empathy for Goodman and ultimately draws them further into the story because the reader begins to relate to Goodman Brown. Goodman finds that people who were respected and held positions of power were the ones who were connected to Satan and worshipped the devil. In modern day America you find those of power being called evil, or even being known as “devil worshipers”.

This is were the aspect of realism comes into play. Hawthorne unknowingly predicted that people who held positions that come with respect are evil and “heartless”. Hawthorne also uses realism to compare both a devil worshiping and a church sermon. Hawthorne uses the dreadful anthem as the church congregation singing a church hymn. He uses the large rock as the altar; blazing pines as candles; assembly if townspeople as the church congregation; Satan as the pastor; swelling chorus as the church choir; and the Presentation of converts and basin of blood as a baptism. By comparing these to things to each other, Hawthorne creates a story that show the realistic concepts that the two aren’t that different, going against the American society and common thought. Without Hawthorne’s influence from the Romantic period, he wouldn’t have used a realism approach to show that Satanism and Puritanism aren’t that different in the long run, something that would not have been accepted before the Romantic period.