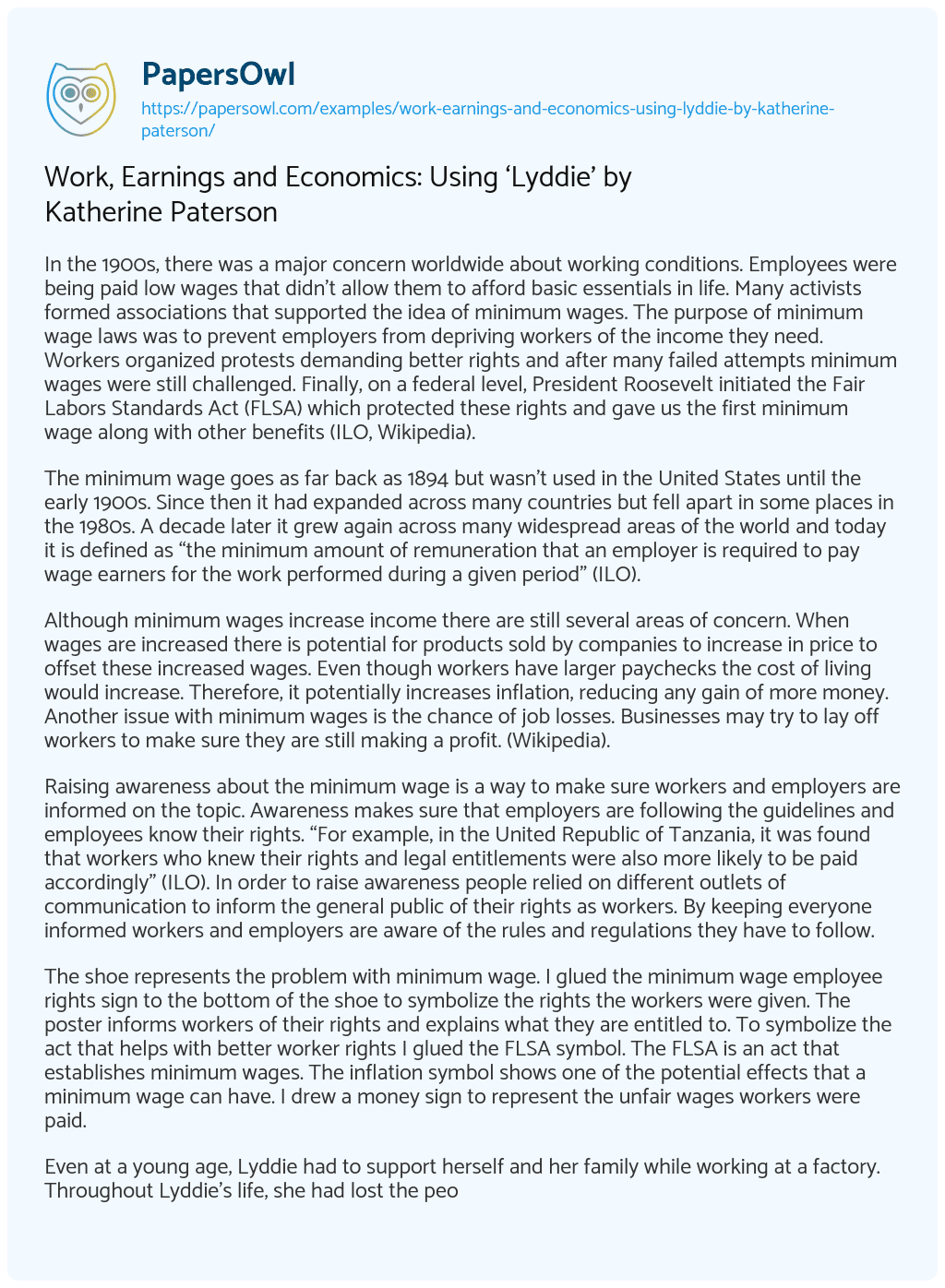 In the 1900s, there was a major concern worldwide about working conditions. Employees were being paid low wages that didn’t allow them to afford basic essentials in life. Many activists formed associations that supported the idea of minimum wages. The purpose of minimum wage laws was to prevent employers from depriving workers of the income they need. Workers organized protests demanding better rights and after many failed attempts minimum wages were still challenged. Finally, on a federal level, President Roosevelt initiated the Fair Labors Standards Act (FLSA) which protected these rights and gave us the first minimum wage along with other benefits (ILO, Wikipedia).

The minimum wage goes as far back as 1894 but wasn’t used in the United States until the early 1900s. Since then it had expanded across many countries but fell apart in some places in the 1980s. A decade later it grew again across many widespread areas of the world and today it is defined as “the minimum amount of remuneration that an employer is required to pay wage earners for the work performed during a given period” (ILO).

Although minimum wages increase income there are still several areas of concern. When wages are increased there is potential for products sold by companies to increase in price to offset these increased wages. Even though workers have larger paychecks the cost of living would increase. Therefore, it potentially increases inflation, reducing any gain of more money. Another issue with minimum wages is the chance of job losses. Businesses may try to lay off workers to make sure they are still making a profit. (Wikipedia).

Raising awareness about the minimum wage is a way to make sure workers and employers are informed on the topic. Awareness makes sure that employers are following the guidelines and employees know their rights. “For example, in the United Republic of Tanzania, it was found that workers who knew their rights and legal entitlements were also more likely to be paid accordingly” (ILO). In order to raise awareness people relied on different outlets of communication to inform the general public of their rights as workers. By keeping everyone informed workers and employers are aware of the rules and regulations they have to follow.

The shoe represents the problem with minimum wage. I glued the minimum wage employee rights sign to the bottom of the shoe to symbolize the rights the workers were given. The poster informs workers of their rights and explains what they are entitled to. To symbolize the act that helps with better worker rights I glued the FLSA symbol. The FLSA is an act that establishes minimum wages. The inflation symbol shows one of the potential effects that a minimum wage can have. I drew a money sign to represent the unfair wages workers were paid.

Even at a young age, Lyddie had to support herself and her family while working at a factory. Throughout Lyddie’s life, she had lost the people she cared about. After Lyddie lost those she cared about she became lonely and had to face the world on her own. Since Lyddie didn’t have a family to comfort her she relied on fictional characters to make her feel safe. While working at the factory Lyddie’s roommate Betsy read her a book called “Oliver Twist.” Lyddie adored the book because she could relate to it. She saved up her money to buy her own copy of “Oliver Twist.” At work, Lyddie would read whenever she got the chance. “Besides, her Oliver was pasted up, and any free moment her eyes went to the text. She read and reread the page for the day until she nearly had the words by heart” (87). Lyddie was determined to learn how to read. After getting fired Lyddie made the decision to use the money she had been saving up to go to college. Education became Lyddie’s passion and she continued to work towards better education.

From the moment Lyddie was separated from her family she had to get through tough times by herself and make her own decisions. Throughout her life she experienced many hardships, not only being separated from her family but also working long hours in harsh conditions, getting ill, losing people she cares about, and being falsely accused and fired from her job. Lyddie had to learn to be strong and get through bad situations that occurred. She continued to work hard and put the situations behind her. Even after getting fired Lyddie didn’t accept defeat but used it as an opportunity to go to college.

By being alone Lyddie had to rely on herself to work hard. Lyddie came from a family that didn’t have much. She worked very hard to earn things and support herself and her family. When Lyddie got the job at the factory she wasn’t very good at it. With practice, Lyddie became one of the best girls. Even though Lyddie was a hard worker, she was hard on herself. Lyddie was upset when she realized she couldn’t do everything. “Too late. She’d come too late. She was always too late. Too late to save the farm. Too late to keep her family together. Too late to do for Diana the only thing she knew to do” (152). Lyddie blamed herself for things that were out of her control. At a young age Lyddie had taken on many responsibilities and she worked very hard. Lyddie should have been proud of herself and all that she had done but rather she was critical of herself.

The shoe represents Lyddie’s story. Lyddie is alone and has lost people in her life. To represent those that Lyddie has lost I cut holes in the shoe. Throughout the book, Lyddie is hard on herself after all the hard work she has done. I made the shoe look worn down to show how she has taken on too much. I tied the laces tightly to symbolize that even though Lyddie has been through a lot she has stayed strong. I glued the letters Lyddie had written to her family to symbolize that Lyddie was determined to learn how to read. After reading Oliver Twist Lyddie’s writing improved and she was able to spell better.

The Minimum Wage Level and Business