Who do we Pretend to be on Social Media? 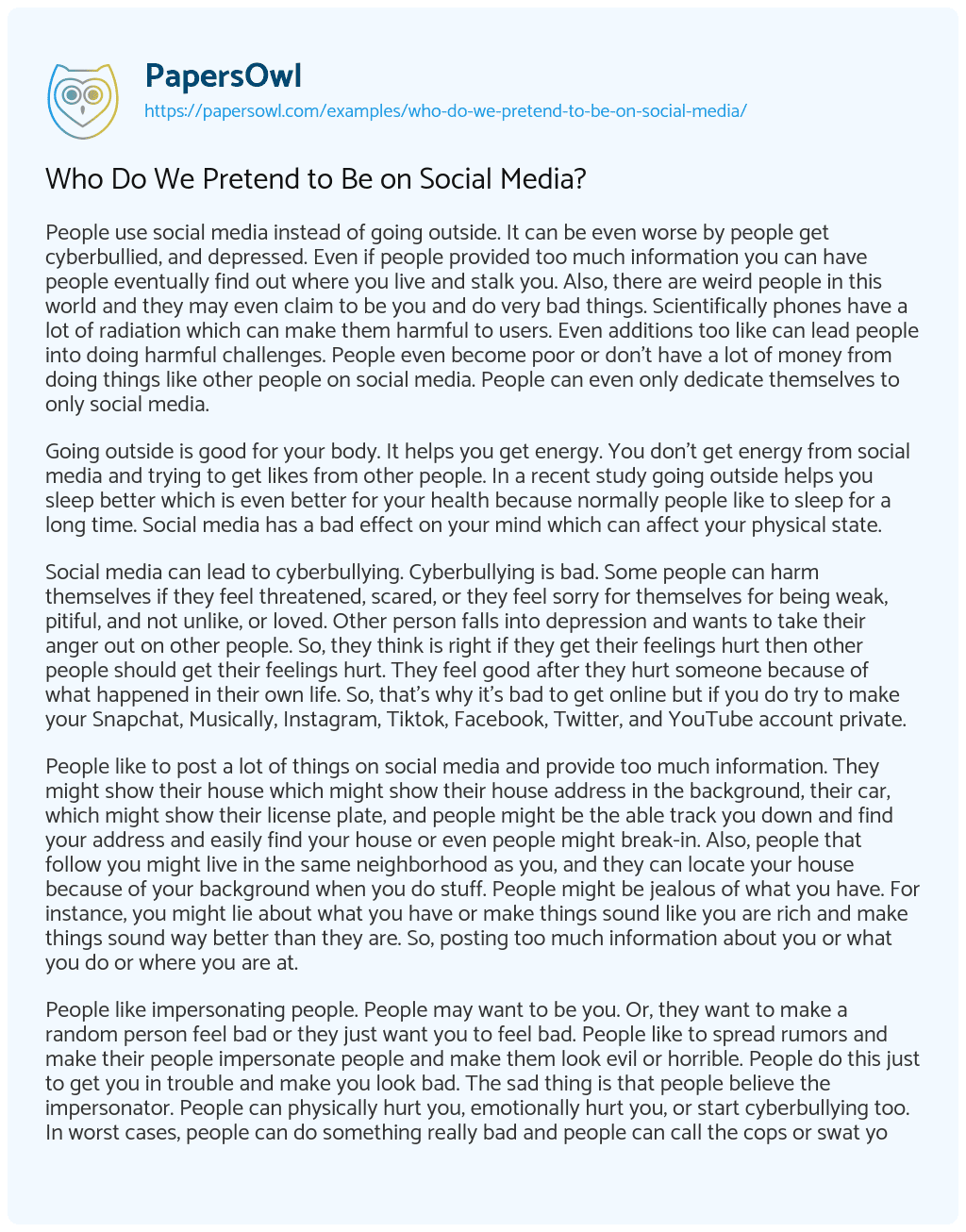 People use social media instead of going outside. It can be even worse by people get cyberbullied, and depressed. Even if people provided too much information you can have people eventually find out where you live and stalk you. Also, there are weird people in this world and they may even claim to be you and do very bad things. Scientifically phones have a lot of radiation which can make them harmful to users. Even additions too like can lead people into doing harmful challenges. People even become poor or don’t have a lot of money from doing things like other people on social media. People can even only dedicate themselves to only social media.

Going outside is good for your body. It helps you get energy. You don’t get energy from social media and trying to get likes from other people. In a recent study going outside helps you sleep better which is even better for your health because normally people like to sleep for a long time. Social media has a bad effect on your mind which can affect your physical state.

Social media can lead to cyberbullying. Cyberbullying is bad. Some people can harm themselves if they feel threatened, scared, or they feel sorry for themselves for being weak, pitiful, and not unlike, or loved. Other person falls into depression and wants to take their anger out on other people. So, they think is right if they get their feelings hurt then other people should get their feelings hurt. They feel good after they hurt someone because of what happened in their own life. So, that’s why it’s bad to get online but if you do try to make your Snapchat, Musically, Instagram, Tiktok, Facebook, Twitter, and YouTube account private.

People like to post a lot of things on social media and provide too much information. They might show their house which might show their house address in the background, their car, which might show their license plate, and people might be the able track you down and find your address and easily find your house or even people might break-in. Also, people that follow you might live in the same neighborhood as you, and they can locate your house because of your background when you do stuff. People might be jealous of what you have. For instance, you might lie about what you have or make things sound like you are rich and make things sound way better than they are. So, posting too much information about you or what you do or where you are at.

People like impersonating people. People may want to be you. Or, they want to make a random person feel bad or they just want you to feel bad. People like to spread rumors and make their people impersonate people and make them look evil or horrible. People do this just to get you in trouble and make you look bad. The sad thing is that people believe the impersonator. People can physically hurt you, emotionally hurt you, or start cyberbullying too. In worst cases, people can do something really bad and people can call the cops or swat you. Even if you weren’t doing anything wrong or going against any of the laws. The phone itself can be very harmful to users. Phones have a lot of radiation which can be bad for the human brain. You can even die from staring into the phone too much. Cell phones don’t always emit the same level of radiation. For example, your phone will emit the most radiation when connecting to cellular towers. Phones might have the potential to cause certain types of cancer or other health problems Cell phones to emit radiofrequency radiation (radio waves), a form of non-ionizing radiation, from their antennas. So, phones, in general, are not always good to be staring at, and also it’s not good to be connected to the internet a lot, because it emits the greatest radiation. The Danish Study, “conducted in Denmark, linked billing information from more than 358,000 cell phone subscribers with brain tumor incidence data from the Danish Cancer Registry.”

Phone addictions are very common. Especially in teenagers (13-17). Mostly all they do is post things on YouTube, Instagram, TikTok, Snapchat, Facebook, or Twitter. Phone addictions are so common that they created a word when people are talking to you and you’re casually checking your phone it’s called phubbing. Even worse you might become addicted to challenges in social media. Most challenges can be harmful to you or the human body. It can even hurt the outside of your body.

You can have a lot of money but you can lose it. People who have the most followers mostly are rich. You can become very addicted just to get followers. You can buy followers which costs you money. But it’s not good to do it. That’s because you’re just wasting money that you worked hard for. I know a lot of “followers” can get you a lot of attention, but they might see your videos as not interesting. People who own social media might know that you bought followers and did not earn them and ban you. So, in all you just

Who Do We Pretend to Be on Social Media?. (2022, May 04). Retrieved from https://papersowl.com/examples/who-do-we-pretend-to-be-on-social-media/

The Negative Side of Social Media