Was Iago a Real Villain? 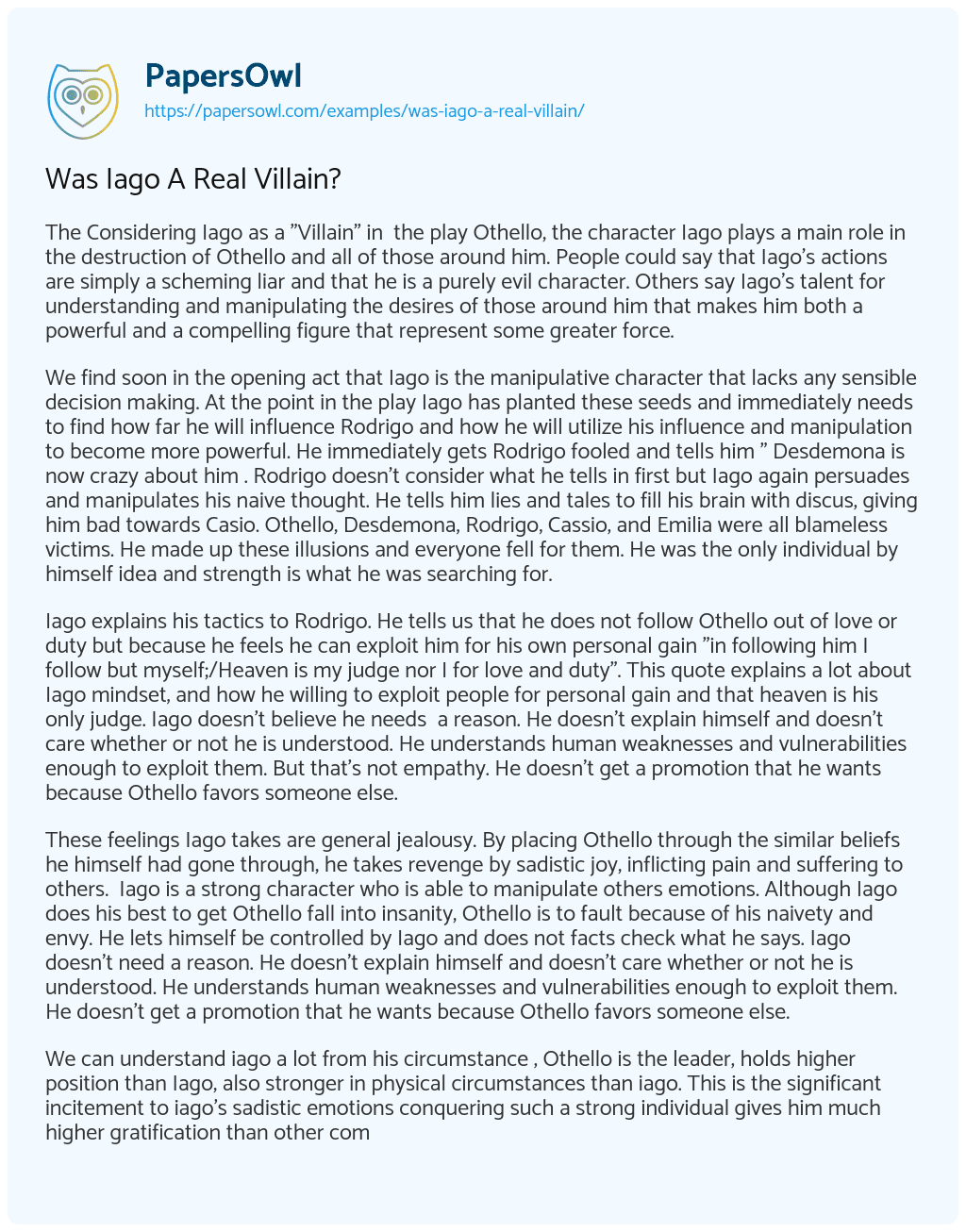 The Considering Iago as a “Villain” in  the play Othello, the character Iago plays a main role in the destruction of Othello and all of those around him. People could say that Iago’s actions are simply a scheming liar and that he is a purely evil character. Others say Iago’s talent for understanding and manipulating the desires of those around him that makes him both a powerful and a compelling figure that represent some greater force.

We find soon in the opening act that Iago is the manipulative character that lacks any sensible decision making. At the point in the play Iago has planted these seeds and immediately needs to find how far he will influence Rodrigo and how he will utilize his influence and manipulation to become more powerful. He immediately gets Rodrigo fooled and tells him ” Desdemona is now crazy about him . Rodrigo doesn’t consider what he tells in first but Iago again persuades and manipulates his naive thought. He tells him lies and tales to fill his brain with discus, giving him bad towards Casio. Othello, Desdemona, Rodrigo, Cassio, and Emilia were all blameless victims. He made up these illusions and everyone fell for them. He was the only individual by himself idea and strength is what he was searching for.

Iago explains his tactics to Rodrigo. He tells us that he does not follow Othello out of love or duty but because he feels he can exploit him for his own personal gain “in following him I follow but myself;/Heaven is my judge nor I for love and duty”. This quote explains a lot about Iago mindset, and how he willing to exploit people for personal gain and that heaven is his only judge. Iago doesn’t believe he needs  a reason. He doesn’t explain himself and doesn’t care whether or not he is understood. He understands human weaknesses and vulnerabilities enough to exploit them. But that’s not empathy. He doesn’t get a promotion that he wants because Othello favors someone else.

These feelings Iago takes are general jealousy. By placing Othello through the similar beliefs he himself had gone through, he takes revenge by sadistic joy, inflicting pain and suffering to others.  Iago is a strong character who is able to manipulate others emotions. Although Iago does his best to get Othello fall into insanity, Othello is to fault because of his naivety and envy. He lets himself be controlled by Iago and does not facts check what he says. Iago doesn’t need a reason. He doesn’t explain himself and doesn’t care whether or not he is understood. He understands human weaknesses and vulnerabilities enough to exploit them. He doesn’t get a promotion that he wants because Othello favors someone else.

We can understand iago a lot from his circumstance , Othello is the leader, holds higher position than Iago, also stronger in physical circumstances than iago. This is the significant incitement to iago’s sadistic emotions conquering such a strong individual gives him much higher gratification than other common people. Forward, iago’s hate towards Othello is from racial favoritism.

I would definitely say one could see him as a scheming and a liar more than a greater force. He has manipulated everyone around him and used people’s downfalls to boost himself my own personal gain. Time and time again he has shown that he is willing to Play with people’s emotions And lied to put a further narrative.

Was Iago A Real Villain?. (2019, Jun 08). Retrieved from https://papersowl.com/examples/was-iago-a-real-villain/

My Attitude to Othello and Iago