Understanding the Youth in a Clockwork Orange, a Novel by Anthony Burgess 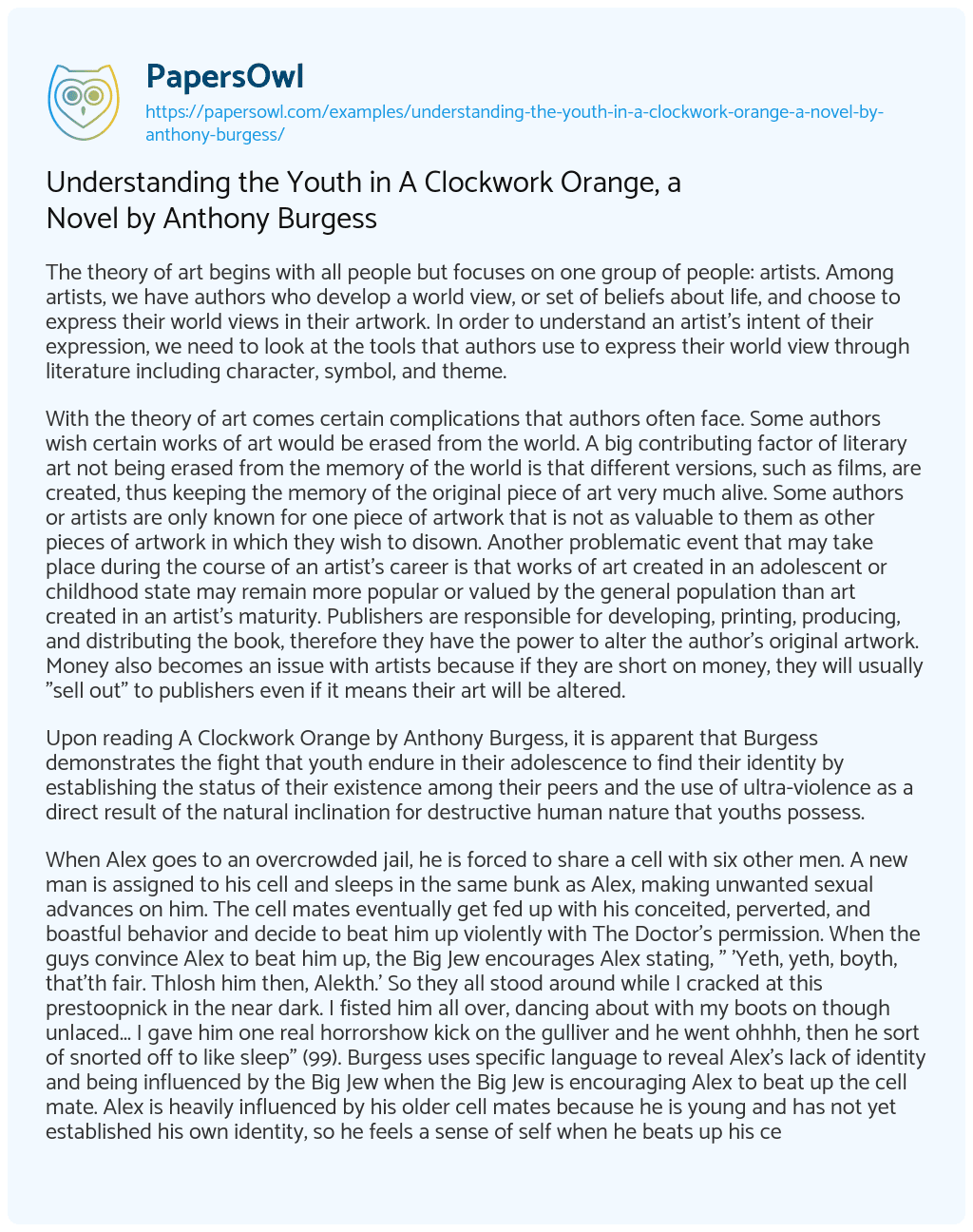 The theory of art begins with all people but focuses on one group of people: artists. Among artists, we have authors who develop a world view, or set of beliefs about life, and choose to express their world views in their artwork. In order to understand an artist’s intent of their expression, we need to look at the tools that authors use to express their world view through literature including character, symbol, and theme.

With the theory of art comes certain complications that authors often face. Some authors wish certain works of art would be erased from the world. A big contributing factor of literary art not being erased from the memory of the world is that different versions, such as films, are created, thus keeping the memory of the original piece of art very much alive. Some authors or artists are only known for one piece of artwork that is not as valuable to them as other pieces of artwork in which they wish to disown. Another problematic event that may take place during the course of an artist’s career is that works of art created in an adolescent or childhood state may remain more popular or valued by the general population than art created in an artist’s maturity. Publishers are responsible for developing, printing, producing, and distributing the book, therefore they have the power to alter the author’s original artwork. Money also becomes an issue with artists because if they are short on money, they will usually “sell out” to publishers even if it means their art will be altered.

Upon reading A Clockwork Orange by Anthony Burgess, it is apparent that Burgess demonstrates the fight that youth endure in their adolescence to find their identity by establishing the status of their existence among their peers and the use of ultra-violence as a direct result of the natural inclination for destructive human nature that youths possess.

When Alex goes to an overcrowded jail, he is forced to share a cell with six other men. A new man is assigned to his cell and sleeps in the same bunk as Alex, making unwanted sexual advances on him. The cell mates eventually get fed up with his conceited, perverted, and boastful behavior and decide to beat him up violently with The Doctor’s permission. When the guys convince Alex to beat him up, the Big Jew encourages Alex stating, ” ‘Yeth, yeth, boyth, that’th fair. Thlosh him then, Alekth.’ So they all stood around while I cracked at this prestoopnick in the near dark. I fisted him all over, dancing about with my boots on though unlaced… I gave him one real horrorshow kick on the gulliver and he went ohhhh, then he sort of snorted off to like sleep” (99). Burgess uses specific language to reveal Alex’s lack of identity and being influenced by the Big Jew when the Big Jew is encouraging Alex to beat up the cell mate. Alex is heavily influenced by his older cell mates because he is young and has not yet established his own identity, so he feels a sense of self when he beats up his cell mate using ultra-violence. Since Alex is one of the youngest vecks in jail, the influence of the older men reveal his lack of identity. When Alex dances with his boots, it implies that he feels a sense of self when he is engaging in ultra-violence against his cell mate which proves the author’s point of youth seeking identity through destructive human nature. This world view impacts us by showing that youth are often seeking their own identity through violent behavior because they lack a sense of self and have a natural human instinct for destructive behavior.

After a night filled with violence, Alex and his droogs return to the Korova Milk Bar, which is considered their safe place. Since Alex is one of the strongest of the droogs and carries out more ultra-violence than his droogs, he states,” “There has to be a leader. Discipline there has to be. Right? None of them skazatted a word or nodded even. I got more razdraz inside, calmer out. ‘I,’ I said, “have been in charge long now. We are all droogs, but somebody has to be in charge. Right? Right? They all like nodded, wary like” (34). In this quote, Alex is trying to establish his identity by being the leader of his droogs because he is more ultra-violent and influences his droogs to carry out ultra-violent behavior. He is attempting to persuade his peers to identify him as a leader in order to fulfill his fight for discovering his sense of self. As an adolescent, he is searching for some importance in his group of droogs. The evidence proves the author’s point that youth are searching for themselves and often seek it through destructive human behavior, which Alex influences his droogs to engage in. Burgess argues that youth are seeking their status of existence and often times find satisfaction through establishing superiority over their peers. This evidence reveals the fight that adolescents face in order to seek their identity and is significant to the author’s world view because it directly portrays the ways in which youths express their need for importance among their peers. The specific world view that is being articulated in this argument is the fact that all adolescents attempt to find their identity by establishing the status of their existence among their peers and is important to us as a society because there are many youths today who are struggling with the same lack of identity issues who choose to express themselves by relating to their peers whether it is being a leader or influencing their friends to associate them with specific positive or negative behaviors.

Based on the evidence, we can conclude that adolescents tend to establish their identity by means of natural human instinct for destructive and violent behavior and seeking to establish their sense of self by means of leadership within their peers. If Burgess’s world view was the only world view, we would have a large population of youth committing acts of violence and influencing their peers to engage in acts of violence simply because they are seeking their own individuality. It would greatly increase violent crime rates and create a large range of issues within the youth’s population. During the time of the publication, we were experiencing the Civil Rights Movement which symbolizes individualism, freedom of expression, and the fight for basic human rights. There were riots which many adolescents and young adults actively engaged in which helped in establishing their own identity through fighting for their rights and freedom from government suppression. We can connect these historical events directly to the idea that youths felt the need to act out violently in order to establish their own sense of self and belonging within the world. In my opinion, youths are simply seeking individuality and identity to feel a sense of importance within the world which starts with the approval and recognition from their peers. Youths tend to act on their human instinct and natural inclination for destructive behavior because they need an outlet for their expression, and instead of creation as their way of expression they channel their need for establishing their identity through destruction.

Understanding the Youth in A Clockwork Orange, a Novel by Anthony Burgess. (2022, Nov 12). Retrieved from https://papersowl.com/examples/understanding-the-youth-in-a-clockwork-orange-a-novel-by-anthony-burgess/

Youth and Different Factors of Aggression