The Terrible Consequences of Climate Change 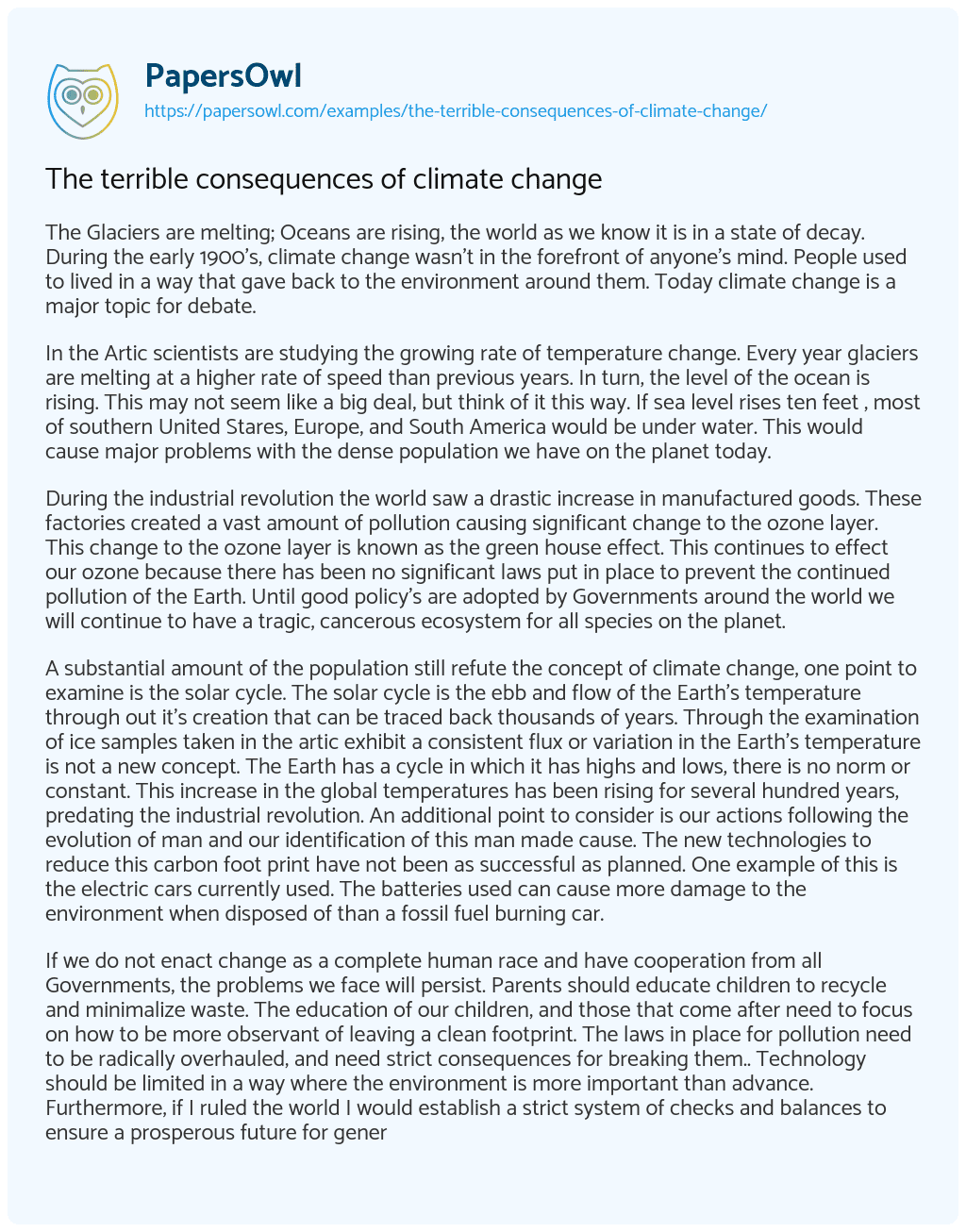 The Glaciers are melting; Oceans are rising, the world as we know it is in a state of decay. During the early 1900’s, climate change wasn’t in the forefront of anyone’s mind. People used to lived in a way that gave back to the environment around them. Today climate change is a major topic for debate.

In the Artic scientists are studying the growing rate of temperature change. Every year glaciers are melting at a higher rate of speed than previous years. In turn, the level of the ocean is rising. This may not seem like a big deal, but think of it this way. If sea level rises ten feet , most of southern United Stares, Europe, and South America would be under water. This would cause major problems with the dense population we have on the planet today.

During the industrial revolution the world saw a drastic increase in manufactured goods. These factories created a vast amount of pollution causing significant change to the ozone layer. This change to the ozone layer is known as the green house effect. This continues to effect our ozone because there has been no significant laws put in place to prevent the continued pollution of the Earth. Until good policy’s are adopted by Governments around the world we will continue to have a tragic, cancerous ecosystem for all species on the planet.

A substantial amount of the population still refute the concept of climate change, one point to examine is the solar cycle. The solar cycle is the ebb and flow of the Earth’s temperature through out it’s creation that can be traced back thousands of years. Through the examination of ice samples taken in the artic exhibit a consistent flux or variation in the Earth’s temperature is not a new concept. The Earth has a cycle in which it has highs and lows, there is no norm or constant. This increase in the global temperatures has been rising for several hundred years, predating the industrial revolution. An additional point to consider is our actions following the evolution of man and our identification of this man made cause. The new technologies to reduce this carbon foot print have not been as successful as planned. One example of this is the electric cars currently used. The batteries used can cause more damage to the environment when disposed of than a fossil fuel burning car.

If we do not enact change as a complete human race and have cooperation from all Governments, the problems we face will persist. Parents should educate children to recycle and minimalize waste. The education of our children, and those that come after need to focus on how to be more observant of leaving a clean footprint. The laws in place for pollution need to be radically overhauled, and need strict consequences for breaking them.. Technology should be limited in a way where the environment is more important than advance. Furthermore, if I ruled the world I would establish a strict system of checks and balances to ensure a prosperous future for generations to come.

The terrible consequences of climate change. (2022, May 02). Retrieved from https://papersowl.com/examples/the-terrible-consequences-of-climate-change/

Climate Change: why Government Failure to Act is the Problem

Problems which Affected on Climate Change