The Techniques of Cesar Chavez in David Cortright’s Book, Gandhi and Beyond 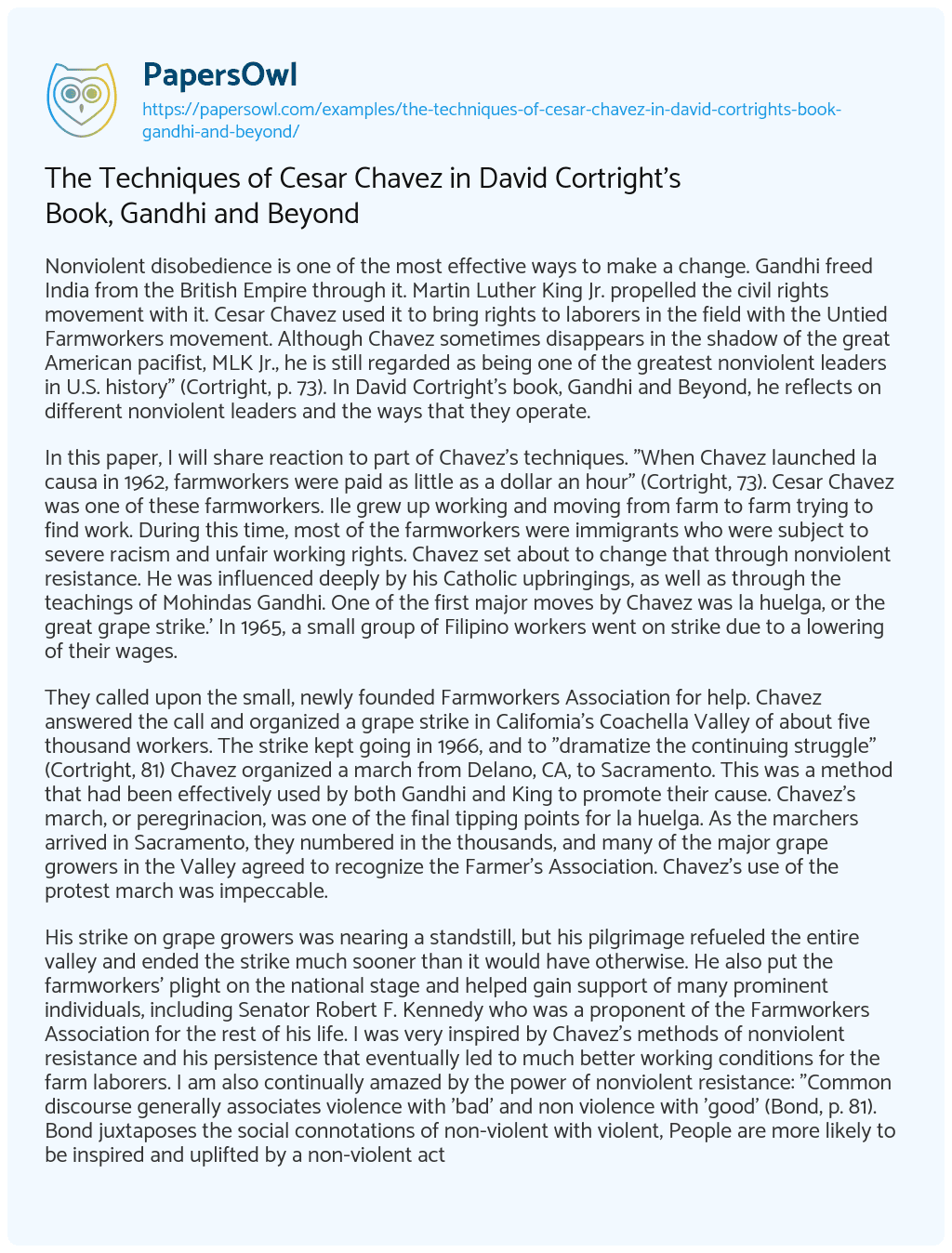 Nonviolent disobedience is one of the most effective ways to make a change. Gandhi freed India from the British Empire through it. Martin Luther King Jr. propelled the civil rights movement with it. Cesar Chavez used it to bring rights to laborers in the field with the Untied Farmworkers movement. Although Chavez sometimes disappears in the shadow of the great American pacifist, MLK Jr., he is still regarded as being one of the greatest nonviolent leaders in U.S. history” (Cortright, p. 73). In David Cortright’s book, Gandhi and Beyond, he reflects on different nonviolent leaders and the ways that they operate.

In this paper, I will share reaction to part of Chavez’s techniques. “When Chavez launched la causa in 1962, farmworkers were paid as little as a dollar an hour” (Cortright, 73). Cesar Chavez was one of these farmworkers. Ile grew up working and moving from farm to farm trying to find work. During this time, most of the farmworkers were immigrants who were subject to severe racism and unfair working rights. Chavez set about to change that through nonviolent resistance. He was influenced deeply by his Catholic upbringings, as well as through the teachings of Mohindas Gandhi. One of the first major moves by Chavez was la huelga, or the great grape strike.’ In 1965, a small group of Filipino workers went on strike due to a lowering of their wages.

They called upon the small, newly founded Farmworkers Association for help. Chavez answered the call and organized a grape strike in Califomia’s Coachella Valley of about five thousand workers. The strike kept going in 1966, and to “dramatize the continuing struggle” (Cortright, 81) Chavez organized a march from Delano, CA, to Sacramento. This was a method that had been effectively used by both Gandhi and King to promote their cause. Chavez’s march, or peregrinacion, was one of the final tipping points for la huelga. As the marchers arrived in Sacramento, they numbered in the thousands, and many of the major grape growers in the Valley agreed to recognize the Farmer’s Association. Chavez’s use of the protest march was impeccable.

His strike on grape growers was nearing a standstill, but his pilgrimage refueled the entire valley and ended the strike much sooner than it would have otherwise. He also put the farmworkers’ plight on the national stage and helped gain support of many prominent individuals, including Senator Robert F. Kennedy who was a proponent of the Farmworkers Association for the rest of his life. I was very inspired by Chavez’s methods of nonviolent resistance and his persistence that eventually led to much better working conditions for the farm laborers. I am also continually amazed by the power of nonviolent resistance: “Common discourse generally associates violence with ‘bad’ and non violence with ‘good’ (Bond, p. 81). Bond juxtaposes the social connotations of non-violent with violent, People are more likely to be inspired and uplifted by a non-violent action because it has that positive connotation with it.

The connotations of violent and non-violent also hold in other scenarios. If a non-violent demonstration is responded to by violence from the oppressing power, negative attention is brought on the act. In so many instances throughout history, a violent reaction to a non-violent action has resulted in public outrage and lead to even more civil disobedience.

Japanese rule in Korea during the 1910’s was harsh. But “At 2 pm on March 1st of 1919, 33 nationalist leaders gathered at Taehwagwan Restaurant in Seoul and read out the Korean Declaration of Independence. The same thing happened in other appointed sites throughout Korea at the same time. Masses assembled and started peaceful demonstrations…” (Lee, p. 1). This bold non-violent act brought harsh Japanese retribution. An estimated 7,500 Koreans were killed that day by Japanese enforcers. However, though Korean freedom did not occur right away, this act brought a lot of negative pressure and feelings towards the Japanese from all over, and brought a lot of positive vibes to the Koreans who were seen as heroically standing up for what they believe in I opened this paper with a quote from Martin Luther King Jr. The quote presents an analogy of human oppression.

I like to use that quote when thinking of violent and non-violent disobedience. If you pinch the man’s ankles while he rides your back, he can stay on if he is determined. But if you refuse to move, he will surely grow impatient and get off. Only then can you stand up. Is non-violent resistance as effective or more or less effective than it was during the time of Chavez?

The Techniques of Cesar Chavez in David Cortright's Book, Gandhi and Beyond. (2022, Nov 14). Retrieved from https://papersowl.com/examples/the-techniques-of-cesar-chavez-in-david-cortrights-book-gandhi-and-beyond/

The Life and Times of Cesar Chavez

The Colorful Life of Cesar Chavez, a Famous Labor Leader

The Life and Leadership of Cesar Chavez