The Taino VS Columbus 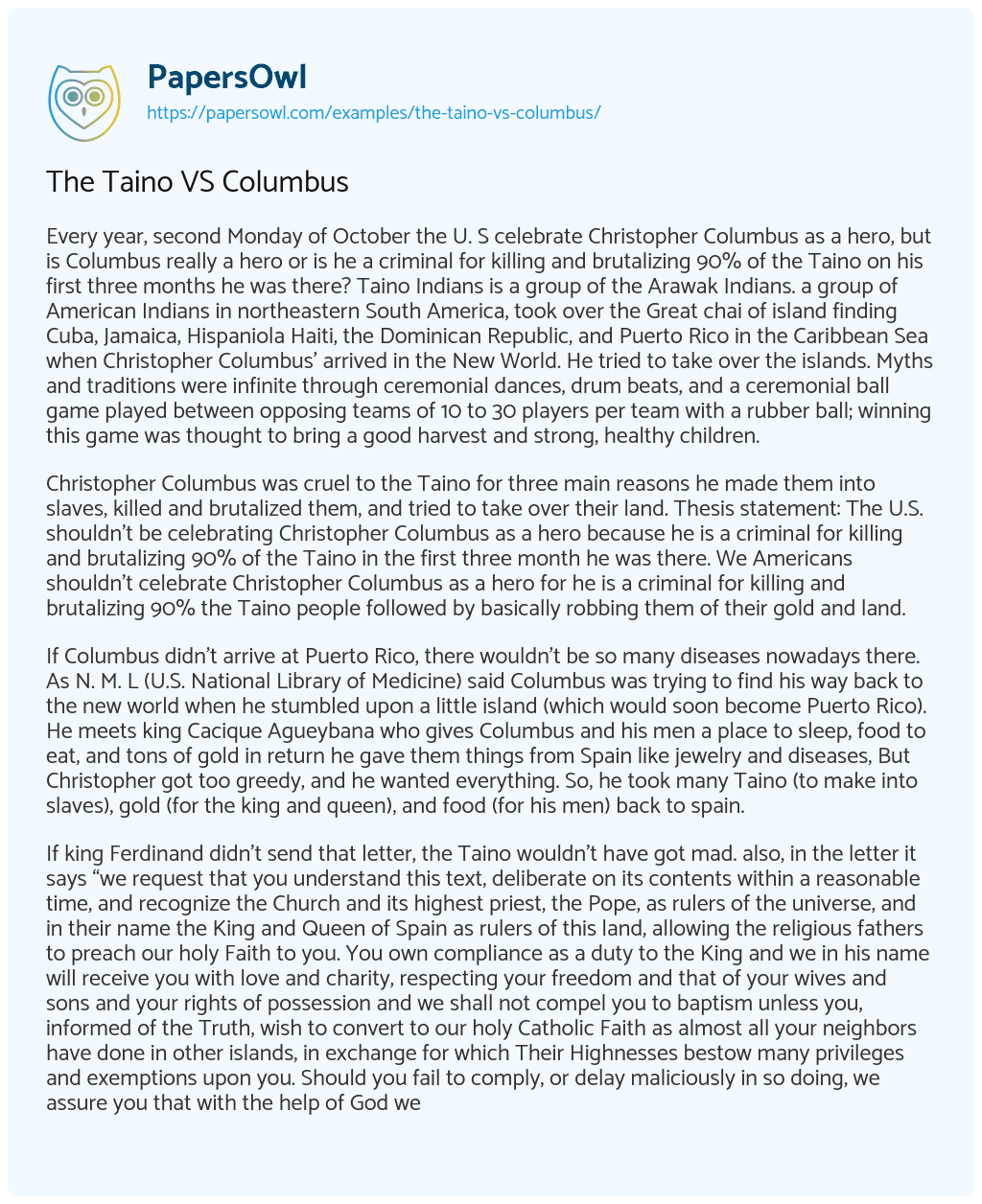 Every year, second Monday of October the U. S celebrate Christopher Columbus as a hero, but is Columbus really a hero or is he a criminal for killing and brutalizing 90% of the Taino on his first three months he was there? Taino Indians is a group of the Arawak Indians. a group of American Indians in northeastern South America, took over the Great chai of island finding Cuba, Jamaica, Hispaniola Haiti, the Dominican Republic, and Puerto Rico in the Caribbean Sea when Christopher Columbus’ arrived in the New World. He tried to take over the islands. Myths and traditions were infinite through ceremonial dances, drum beats, and a ceremonial ball game played between opposing teams of 10 to 30 players per team with a rubber ball; winning this game was thought to bring a good harvest and strong, healthy children.

If Columbus didn’t arrive at Puerto Rico, there wouldn’t be so many diseases nowadays there. As N. M. L (U.S. National Library of Medicine) said Columbus was trying to find his way back to the new world when he stumbled upon a little island (which would soon become Puerto Rico). He meets king Cacique Agueybana who gives Columbus and his men a place to sleep, food to eat, and tons of gold in return he gave them things from Spain like jewelry and diseases, But Christopher got too greedy, and he wanted everything. So, he took many Taino (to make into slaves), gold (for the king and queen), and food (for his men) back to spain.

If king Ferdinand didn’t send that letter, the Taino wouldn’t have got mad. also, in the letter it says “we request that you understand this text, deliberate on its contents within a reasonable time, and recognize the Church and its highest priest, the Pope, as rulers of the universe, and in their name the King and Queen of Spain as rulers of this land, allowing the religious fathers to preach our holy Faith to you. You own compliance as a duty to the King and we in his name will receive you with love and charity, respecting your freedom and that of your wives and sons and your rights of possession and we shall not compel you to baptism unless you, informed of the Truth, wish to convert to our holy Catholic Faith as almost all your neighbors have done in other islands, in exchange for which Their Highnesses bestow many privileges and exemptions upon you. Should you fail to comply, or delay maliciously in so doing, we assure you that with the help of God we shall use force against you, declaring war upon you from all sides and with all possible means, and we shall bind you to the yoke of the Church and of Their Highnesses; we shall enslave your persons, wives and sons, sell you or dispose of you as the King sees fit; we shall seize your possessions and harm you as much as we can as disobedient and resisting vassals. And we declare you guilty of resulting deaths and injuries, exempting Their Highnesses of such guilt as well as ourselves and the gentlemen who accompany us. We hereby request that legal signatures be after fixed to this text and pray those present to bear witness for us, etc.” As it said in “King Ferdinand’s Letter to the Taino-Arawak Indians” when Columbus went back to Spain to tell the king and queen what he found, but the men he left there got killed. So, King Ferdinand sent a letter to the Taino king which said that he would rule all in all worship him. That letter made the Taino very angry.

Columbus was a monster to the Taino. When Columbus first came to Puerto Rico the Taino were extremely pleasant to him and his men, they gave them food, a place to sleep, and tons and tons of gold. Then Columbus became very greedy. He decided that he wanted more gold and land so, he killed, brutalized, and in slaved 90% of the Taino population. www.History.com said” Columbus sent thousands of peaceful Taino “Indians” from the island of Hispaniola to Spain to be sold. Many died en route. Those left behind were forced to search for gold in mines and work on plantations. Within 60 years after Columbus landed, only a few hundred of what may have been 250,000 Taino were left on their island. As governor and viceroy of the Indies, Columbus imposed iron discipline on what is now the Caribbean country of Dominican Republic, according to documents discovered by Spanish historians in 2005. In response to native unrest and revolt, Columbus ordered a brutal crackdown in which many natives were killed; in an attempt to deter further rebellion, Columbus ordered their dismembered bodies to be paraded through the streets”

The Taino VS Columbus. (2021, May 10). Retrieved from https://papersowl.com/examples/the-taino-vs-columbus/