The Shaping of American Parenting Essay 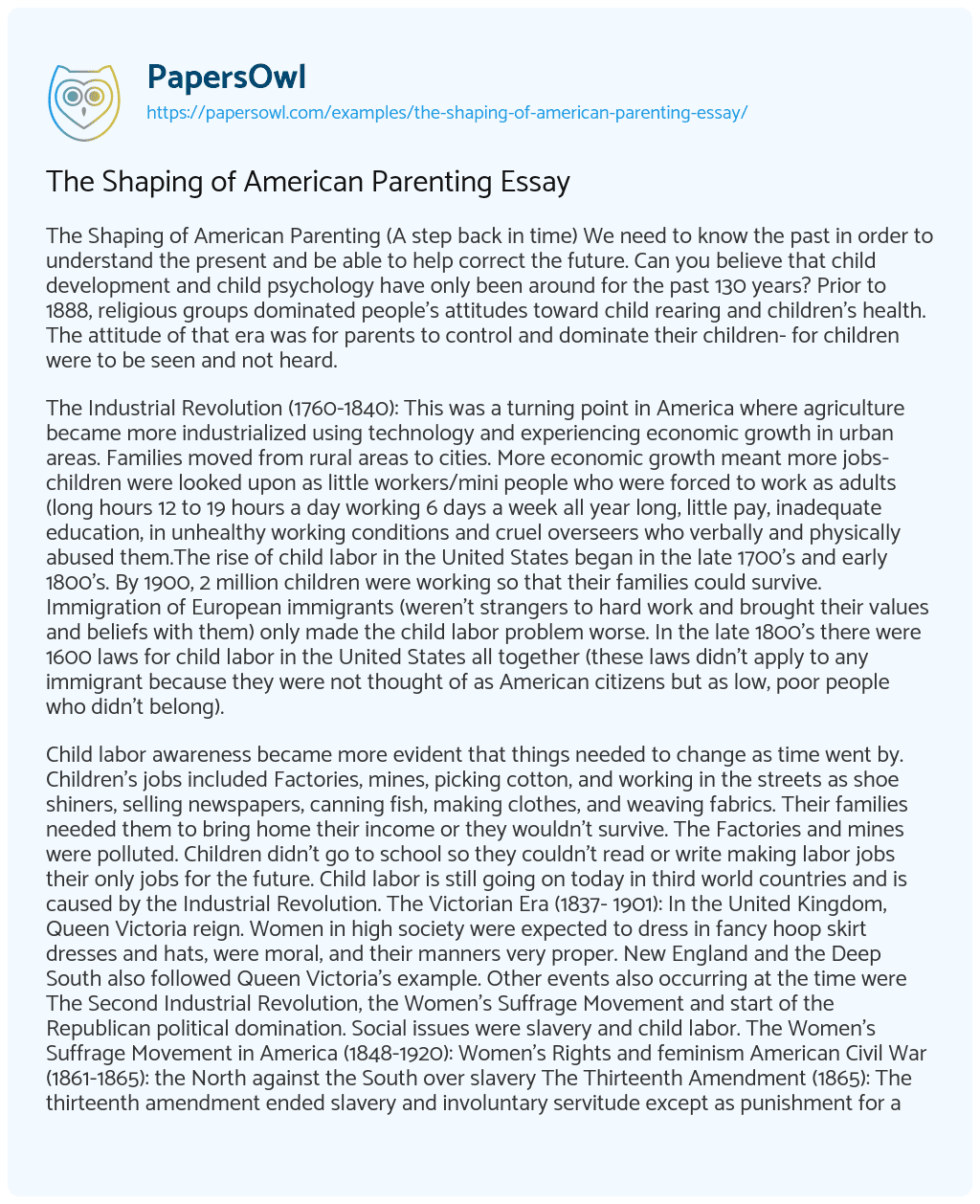 The Shaping of American Parenting (A step back in time) We need to know the past in order to understand the present and be able to help correct the future. Can you believe that child development and child psychology have only been around for the past 130 years? Prior to 1888, religious groups dominated people’s attitudes toward child rearing and children’s health. The attitude of that era was for parents to control and dominate their children- for children were to be seen and not heard.

The Industrial Revolution (1760-1840): This was a turning point in America where agriculture became more industrialized using technology and experiencing economic growth in urban areas. Families moved from rural areas to cities. More economic growth meant more jobs- children were looked upon as little workers/mini people who were forced to work as adults (long hours 12 to 19 hours a day working 6 days a week all year long, little pay, inadequate education, in unhealthy working conditions and cruel overseers who verbally and physically abused them.The rise of child labor in the United States began in the late 1700’s and early 1800’s. By 1900, 2 million children were working so that their families could survive. Immigration of European immigrants (weren’t strangers to hard work and brought their values and beliefs with them) only made the child labor problem worse. In the late 1800’s there were 1600 laws for child labor in the United States all together (these laws didn’t apply to any immigrant because they were not thought of as American citizens but as low, poor people who didn’t belong).

Child labor awareness became more evident that things needed to change as time went by. Children’s jobs included Factories, mines, picking cotton, and working in the streets as shoe shiners, selling newspapers, canning fish, making clothes, and weaving fabrics. Their families needed them to bring home their income or they wouldn’t survive. The Factories and mines were polluted. Children didn’t go to school so they couldn’t read or write making labor jobs their only jobs for the future. Child labor is still going on today in third world countries and is caused by the Industrial Revolution. The Victorian Era (1837- 1901): In the United Kingdom, Queen Victoria reign. Women in high society were expected to dress in fancy hoop skirt dresses and hats, were moral, and their manners very proper. New England and the Deep South also followed Queen Victoria’s example. Other events also occurring at the time were The Second Industrial Revolution, the Women’s Suffrage Movement and start of the Republican political domination. Social issues were slavery and child labor. The Women’s Suffrage Movement in America (1848-1920): Women’s Rights and feminism American Civil War (1861-1865): the North against the South over slavery The Thirteenth Amendment (1865): The thirteenth amendment ended slavery and involuntary servitude except as punishment for a crime.

The Shaping of American Parenting Essay. (2021, Apr 24). Retrieved from https://papersowl.com/examples/the-shaping-of-american-parenting-essay/