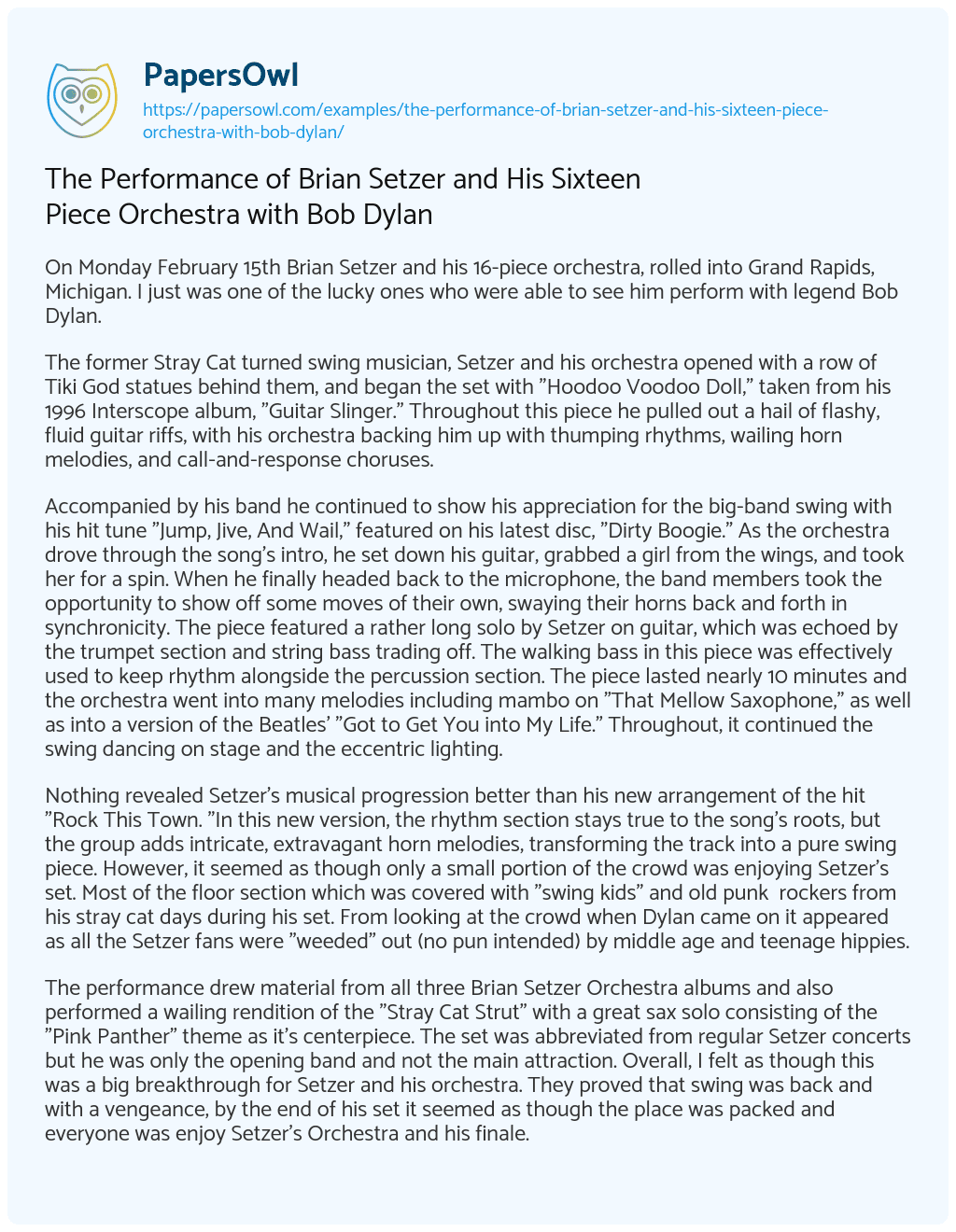 On Monday February 15th Brian Setzer and his 16-piece orchestra, rolled into Grand Rapids, Michigan. I just was one of the lucky ones who were able to see him perform with legend Bob Dylan.

The former Stray Cat turned swing musician, Setzer and his orchestra opened with a row of Tiki God statues behind them, and began the set with “Hoodoo Voodoo Doll,” taken from his 1996 Interscope album, “Guitar Slinger.” Throughout this piece he pulled out a hail of flashy, fluid guitar riffs, with his orchestra backing him up with thumping rhythms, wailing horn melodies, and call-and-response choruses.

Accompanied by his band he continued to show his appreciation for the big-band swing with his hit tune “Jump, Jive, And Wail,” featured on his latest disc, “Dirty Boogie.” As the orchestra drove through the song’s intro, he set down his guitar, grabbed a girl from the wings, and took her for a spin. When he finally headed back to the microphone, the band members took the opportunity to show off some moves of their own, swaying their horns back and forth in synchronicity. The piece featured a rather long solo by Setzer on guitar, which was echoed by the trumpet section and string bass trading off. The walking bass in this piece was effectively used to keep rhythm alongside the percussion section. The piece lasted nearly 10 minutes and the orchestra went into many melodies including mambo on “That Mellow Saxophone,” as well as into a version of the Beatles’ “Got to Get You into My Life.” Throughout, it continued the swing dancing on stage and the eccentric lighting.

Nothing revealed Setzer’s musical progression better than his new arrangement of the hit “Rock This Town. “In this new version, the rhythm section stays true to the song’s roots, but the group adds intricate, extravagant horn melodies, transforming the track into a pure swing piece. However, it seemed as though only a small portion of the crowd was enjoying Setzer’s set. Most of the floor section which was covered with “swing kids” and old punk  rockers from his stray cat days during his set. From looking at the crowd when Dylan came on it appeared as all the Setzer fans were “weeded” out (no pun intended) by middle age and teenage hippies.

The performance drew material from all three Brian Setzer Orchestra albums and also performed a wailing rendition of the “Stray Cat Strut” with a great sax solo consisting of the “Pink Panther” theme as it’s centerpiece. The set was abbreviated from regular Setzer concerts but he was only the opening band and not the main attraction. Overall, I felt as though this was a big breakthrough for Setzer and his orchestra. They proved that swing was back and with a vengeance, by the end of his set it seemed as though the place was packed and everyone was enjoy Setzer’s Orchestra and his finale.

The Performance of Brian Setzer and His Sixteen Piece Orchestra with Bob Dylan. (2022, Nov 16). Retrieved from https://papersowl.com/examples/the-performance-of-brian-setzer-and-his-sixteen-piece-orchestra-with-bob-dylan/

The Symbolism of Nature in Mr. Tambourine Man by Bob Dylan