The Music of War: John Lennon’s Give Peace a Chance and Others 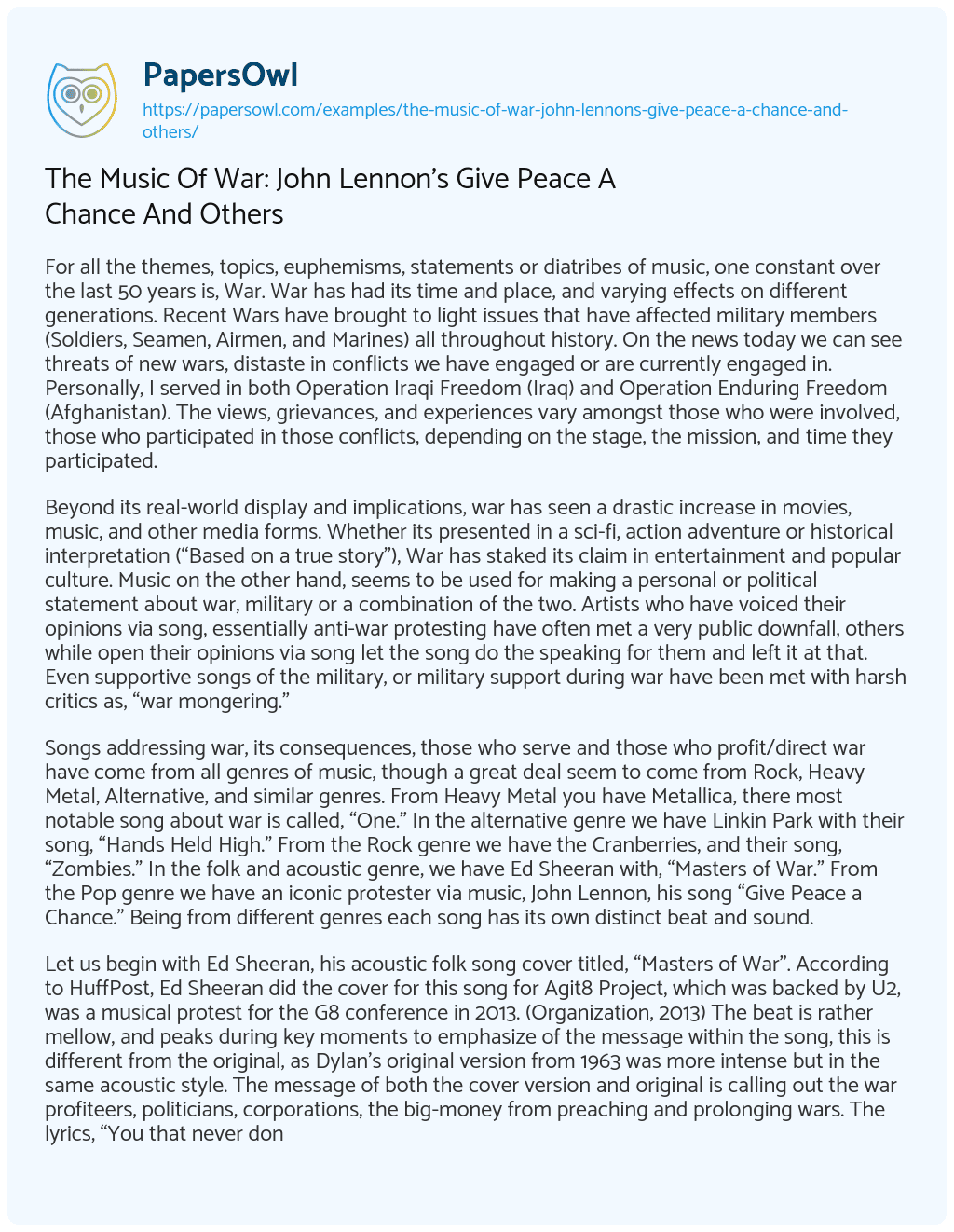 For all the themes, topics, euphemisms, statements or diatribes of music, one constant over the last 50 years is, War. War has had its time and place, and varying effects on different generations. Recent Wars have brought to light issues that have affected military members (Soldiers, Seamen, Airmen, and Marines) all throughout history. On the news today we can see threats of new wars, distaste in conflicts we have engaged or are currently engaged in. Personally, I served in both Operation Iraqi Freedom (Iraq) and Operation Enduring Freedom (Afghanistan). The views, grievances, and experiences vary amongst those who were involved, those who participated in those conflicts, depending on the stage, the mission, and time they participated.

Beyond its real-world display and implications, war has seen a drastic increase in movies, music, and other media forms. Whether its presented in a sci-fi, action adventure or historical interpretation (“Based on a true story”), War has staked its claim in entertainment and popular culture. Music on the other hand, seems to be used for making a personal or political statement about war, military or a combination of the two. Artists who have voiced their opinions via song, essentially anti-war protesting have often met a very public downfall, others while open their opinions via song let the song do the speaking for them and left it at that. Even supportive songs of the military, or military support during war have been met with harsh critics as, “war mongering.”

Songs addressing war, its consequences, those who serve and those who profit/direct war have come from all genres of music, though a great deal seem to come from Rock, Heavy Metal, Alternative, and similar genres. From Heavy Metal you have Metallica, there most notable song about war is called, “One.” In the alternative genre we have Linkin Park with their song, “Hands Held High.” From the Rock genre we have the Cranberries, and their song, “Zombies.” In the folk and acoustic genre, we have Ed Sheeran with, “Masters of War.” From the Pop genre we have an iconic protester via music, John Lennon, his song “Give Peace a Chance.” Being from different genres each song has its own distinct beat and sound.

Let us begin with Ed Sheeran, his acoustic folk song cover titled, “Masters of War”. According to HuffPost, Ed Sheeran did the cover for this song for Agit8 Project, which was backed by U2, was a musical protest for the G8 conference in 2013. (Organization, 2013) The beat is rather mellow, and peaks during key moments to emphasize of the message within the song, this is different from the original, as Dylan’s original version from 1963 was more intense but in the same acoustic style. The message of both the cover version and original is calling out the war profiteers, politicians, corporations, the big-money from preaching and prolonging wars. The lyrics, “You that never done nothin’, but build to destroy, You play with my world, Like it’s your little toy,” support this view. (AZLyrics, n.d.). The lyrics and vocabulary used suggested a learned man, but feels he is perceived by those in power as ignorant.

Next, we address, “One,” a Heavy Metal ballad written and performed by Metallica, released in 1988. One opens with the sound of weapons fire and helicopters, followed by an instrumental prelude. It follows with heavy instrumental riffs and growly, angry vocals to express the feelings of the soldier. According to ultimateclassicrock.com, the song tells the story of a soldier who is badly injured during war and longs for death. (Bryanwawzenek, 2015) The message can be interpreted as a warning of the cost and consequences of war, as a whole and for the individual soldier. The lyrics that best support this view are, “Now that the war is through with me, I’m waking up, I cannot see, That there is not much left of me, Nothing is real but pain now.” (Musixmatch, n.d.)

From the alternative genre we have Linkin Park with, “Hands Held High.” As a long-time fan I can tell you from the outset you can tell this is a protest song. While alternative this song has elements of Hip-Hop, Rap, Rock and Synthesis. The opening line of the song immediately tells you this is a personal statement by the singer, “Turn my mic up louder, I got to say something,” later in the song you see the lyrics that target war, “When the rich wage war, it’s the poor who die,” and finally the targeting of the then President of the United States, “Meanwhile, the leader just talks away, Stuttering and mumbling, For nightly news to replay.” (Linkin Park-Hands Held High, n.d.). This was one of many protest songs done by Linkin Park regarding war, and the language used is very firm and straightforward, there is liberal use of profanity to emphasize certain points.

In the Rock arena, we analyze the cranberries and their song, “Zombies.” The song seems to speak more directly to Irish internal conflicts, as the band is from Ireland, however you could place it on any war in the world, the son was released in 2009. There is a fast-deep bass guitar accompanied by drums throughout the song. The vocals change from a solemn tone to more robust and firm measure as the song and message go on. The message regarding war in this song seems to discuss the cost, and perpetuation of war by masses or “Zombies,” as the singer describes the characters. Lyrics that describe the cost ideal are, “Another mother’s breaking, Heart is taking over, When the violence causes silence, We must be mistaken.” (Cranberries-Zombies, n.d.)The powerful statement in this song would inspire a cover of its own in which the band Bad Wolves, performing would bring in the lead singer to reprise her vocals, sadly she passed away and the cover was released in 2018 as a memorial, which helped cement the original message. (Bad Wolves-Zombies, n.d.)

Finally, from the Pop genre and a historically outspoken person on war we have John Lennon with, “Give Peace a Chance.” This was song was part of a “Bed-In,” protest by John Lennon and his wife which lasted 8 days and garnered much desired media attention. (Songfacts, 2020) The song has a fast-paced pop guitar beat with some drums, tambourines and clapping. Many of the words are sung in a very rhythmic method, with seemingly nonsensical rhyming words used to get to the main line, “All we are saying is give peace a chance.” (Give Peace A Chance, n.d.). This song was released in 1969 and was part of a protest, against the Vietnam War and the ongoing atrocities.

Supporting this line of thought are two sites, one an article on songs about war, and the other a “Top-Ten List,” of the greatest war songs. According to Babble (owned by Disney, according to trademarks on the page), “countless musicians seem to have found one useful thing about war — inspiration for some very moving and popular songs.” (Morton, 2016) The article goes on to list, “12 mainstream hits that have historical and violent backgrounds,” to include; “1999” by Prince, “American Woman” by The Guess Who, “Zombie” by The Cranberries, “Born in the USA” by Bruce Springsteen and others. (Morton, 2016) What makes the top ten list a supportive piece for this argument is that it lists not only the song, but individual feedback and interpretations of the songs. According to The Top Tens, “One” by Metallica, “This song basically explains why soldiers come home from war with psychological scars.” (TheTopTens, 2020)

Articles about war songs have been written at the scholarly level as well. One peer reviewed source that support my outlook is titled, “Civil War Naval Songs: Period Ballads from the Union and Confederate Navies, and the Home Front.” According to the article, “Civil War Naval Songs offers us a glimpse into the war and its culture.” (Kitts, 2015) The article goes on describe how the music is enhanced by the packaging, pictures, essays, context for each song, and introduction by the creator. (Kitts, 2015) While it focuses on the period of the Civil War this article illuminates how music has been used to tell the story of war, but also to send messages, opinions, and stances on war.

The Music Of War: John Lennon's Give Peace A Chance And Others. (2022, Jun 21). Retrieved from https://papersowl.com/examples/the-music-of-war-john-lennons-give-peace-a-chance-and-others/

About Sexism in the Music Industry

Majority of People Listen to Music

“3 Days of Peace and Music” and Woodstock

How did Music Enhance the Experience of Slavery