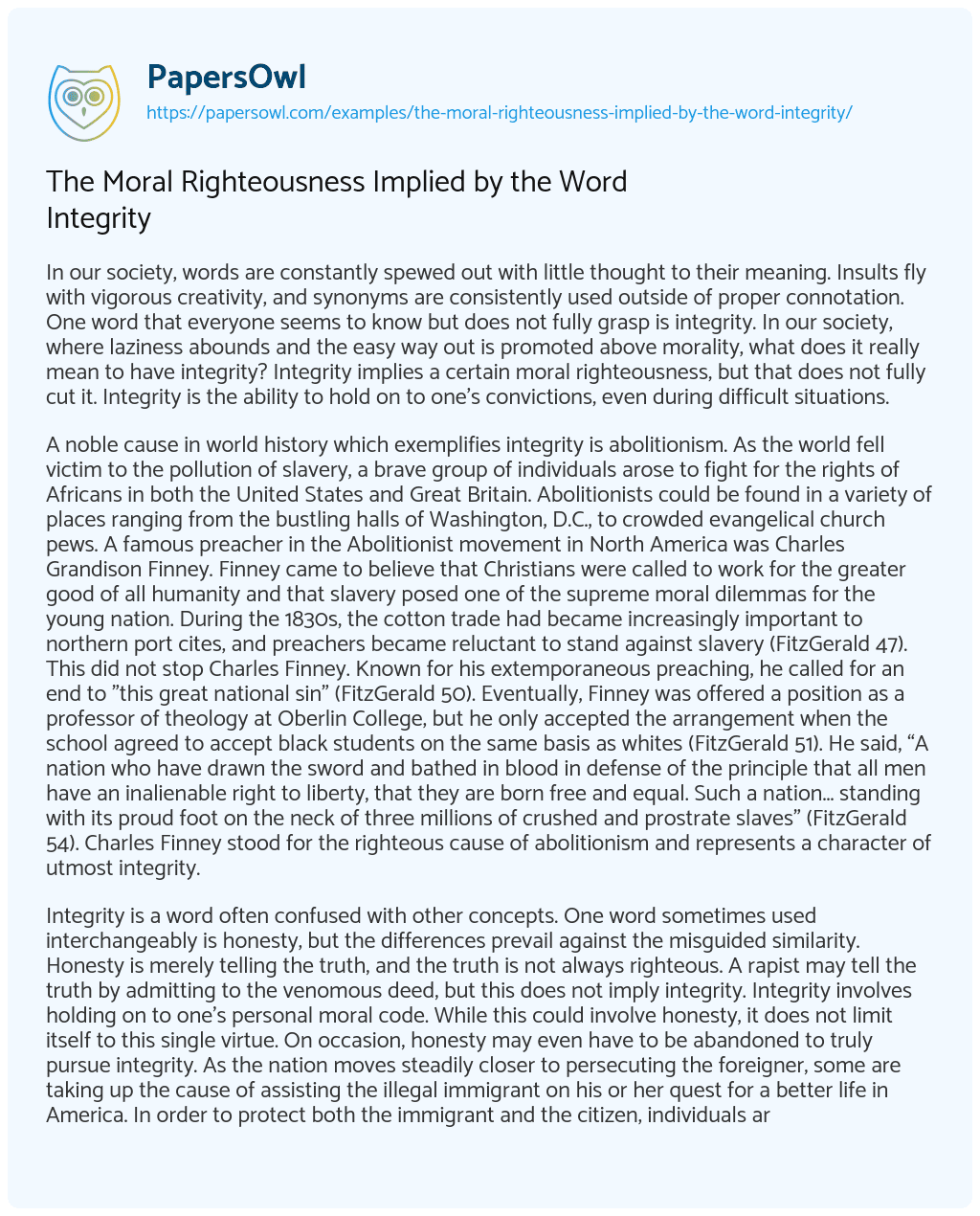 In our society, words are constantly spewed out with little thought to their meaning. Insults fly with vigorous creativity, and synonyms are consistently used outside of proper connotation. One word that everyone seems to know but does not fully grasp is integrity. In our society, where laziness abounds and the easy way out is promoted above morality, what does it really mean to have integrity? Integrity implies a certain moral righteousness, but that does not fully cut it. Integrity is the ability to hold on to one’s convictions, even during difficult situations.

A noble cause in world history which exemplifies integrity is abolitionism. As the world fell victim to the pollution of slavery, a brave group of individuals arose to fight for the rights of Africans in both the United States and Great Britain. Abolitionists could be found in a variety of places ranging from the bustling halls of Washington, D.C., to crowded evangelical church pews. A famous preacher in the Abolitionist movement in North America was Charles Grandison Finney. Finney came to believe that Christians were called to work for the greater good of all humanity and that slavery posed one of the supreme moral dilemmas for the young nation. During the 1830s, the cotton trade had became increasingly important to northern port cites, and preachers became reluctant to stand against slavery (FitzGerald 47). This did not stop Charles Finney. Known for his extemporaneous preaching, he called for an end to “this great national sin” (FitzGerald 50). Eventually, Finney was offered a position as a professor of theology at Oberlin College, but he only accepted the arrangement when the school agreed to accept black students on the same basis as whites (FitzGerald 51). He said, “A nation who have drawn the sword and bathed in blood in defense of the principle that all men have an inalienable right to liberty, that they are born free and equal. Such a nation… standing with its proud foot on the neck of three millions of crushed and prostrate slaves” (FitzGerald 54). Charles Finney stood for the righteous cause of abolitionism and represents a character of utmost integrity.

Integrity is a word often confused with other concepts. One word sometimes used interchangeably is honesty, but the differences prevail against the misguided similarity. Honesty is merely telling the truth, and the truth is not always righteous. A rapist may tell the truth by admitting to the venomous deed, but this does not imply integrity. Integrity involves holding on to one’s personal moral code. While this could involve honesty, it does not limit itself to this single virtue. On occasion, honesty may even have to be abandoned to truly pursue integrity. As the nation moves steadily closer to persecuting the foreigner, some are taking up the cause of assisting the illegal immigrant on his or her quest for a better life in America. In order to protect both the immigrant and the citizen, individuals are forced to lie and break the law on the basis of their own spin of integrity. Integrity is also not found in merely following the laws of the land. To be lawful does not necessarily involve having integrity. Let us take the case of the orphan on the lonely streets of poverty. The orphan may be forced to steal food in order to make it another day. The poor child is considered a thief by the standards of society, yet society allowed the orphan to grow up without proper care and necessities. Orphans may stand up for their convictions, yet their moral code does not prevent theft in dire circumstances. Situations often trump the law in the case of poverty. Integrity requires one to contemplate a higher justice than that of manmade institutions.

Integrity can be found everywhere, even in the most familiar of places. A woman stands in the line at Wal-Mart. Eager to get home and distrustful of cashiers, she quickly makes her way to the self checkout aisle. She swipes the barcodes of a few groceries and a new Nicholas Sparks novel, and then she bags her items and heads out of the automatic exit. The doors close as the bustle of retail sales is forgotten in the mind of the savvy shopper. She places her bags in the passenger seat then takes off in a blue Pontiac. Upon arriving home, she scans over her receipt and notices that the small bag of Purina dog food she had just taken out is missing from the printed paper. It would be easy for the shopper to simply forget about the dog food. She knew she had scanned the item, so it was really just the machine’s fault for not registering the supposedly purchased product. Was $3.56 really something to make a fuss about? The woman, after examining her convictions, drives back to the store and explains her situation. She displayed integrity by not giving in to the laziness of everyday life. She allowed her moral drive to dictate even the most mundane of situations.

Integrity is like a bicycle. Other modes of travel bring about impurities such as pollution. Automobiles rush down the highways with little consideration for the earth they have traversed. A bicycle is much slower, and the rider is able to get a pristine picture of the ever spinning world. Integrity is only accomplished by slowly looking into the deepest regions of the soul. When a person firsts learns to ride a bike, he or she carefully peddles from left to right; this is not always an easy process. To avoid tumbling to the ground, the rider must learn to have careful balance on the bike. The same is true for the person striving for integrity. At first, it may seem difficult to fight against the pressures of immorality, but, after much practice, upholding justice becomes the normal routine. Like riding a bicycle, integrity is a trait not easily forgotten. People with integrity cannot stand for injustice, and they contemplate proper action. To have integrity does not imply rashness. As the bicycle steadily moves down the path, it does not allow itself to be distorted into something else; a bicycle does not transform into a car or a jet. It keeps its shape even on difficult paths. The same is true for a person of integrity. The virtuous person is not swayed by the complexity of a situation. People of integrity peddle along the road of life carefully, not allowing themselves to plummet to the harsh terrain of impurity.

Integrity is a unique trait that must be constantly worked on. No one is able to master the concept fully in his or her lifetime, but the virtuous person persistently practices standing firm on convictions. This is not determined by the laws of the land or the morality of a society. A person of integrity may be called to drastic measures, as in the case of the abolitionist Charles Finney. Integrity can also be applied to commonplace problems, such as in returning an item accidently stolen from a local convenience store. As one strives for integrity, the individual discovers the true reality of his or her moral condition. To display integrity, a person is forced to stand against laziness and injustice on the quest to remain true to one’s sincere fervor.

The Moral Righteousness Implied by the Word Integrity. (2022, Nov 22). Retrieved from https://papersowl.com/examples/the-moral-righteousness-implied-by-the-word-integrity/

Integrity in a World Of play, the Crucible, Arthur Miller

Integrity or Dishonesty Upon Voting?

Self-Reflection, Responsibility for own Mistakes, and the Power of Integrity in the the Crucible by Arthur Miller