The Literary Work, Utopias: a Brief History from Ancient Writings to Virtual Communities 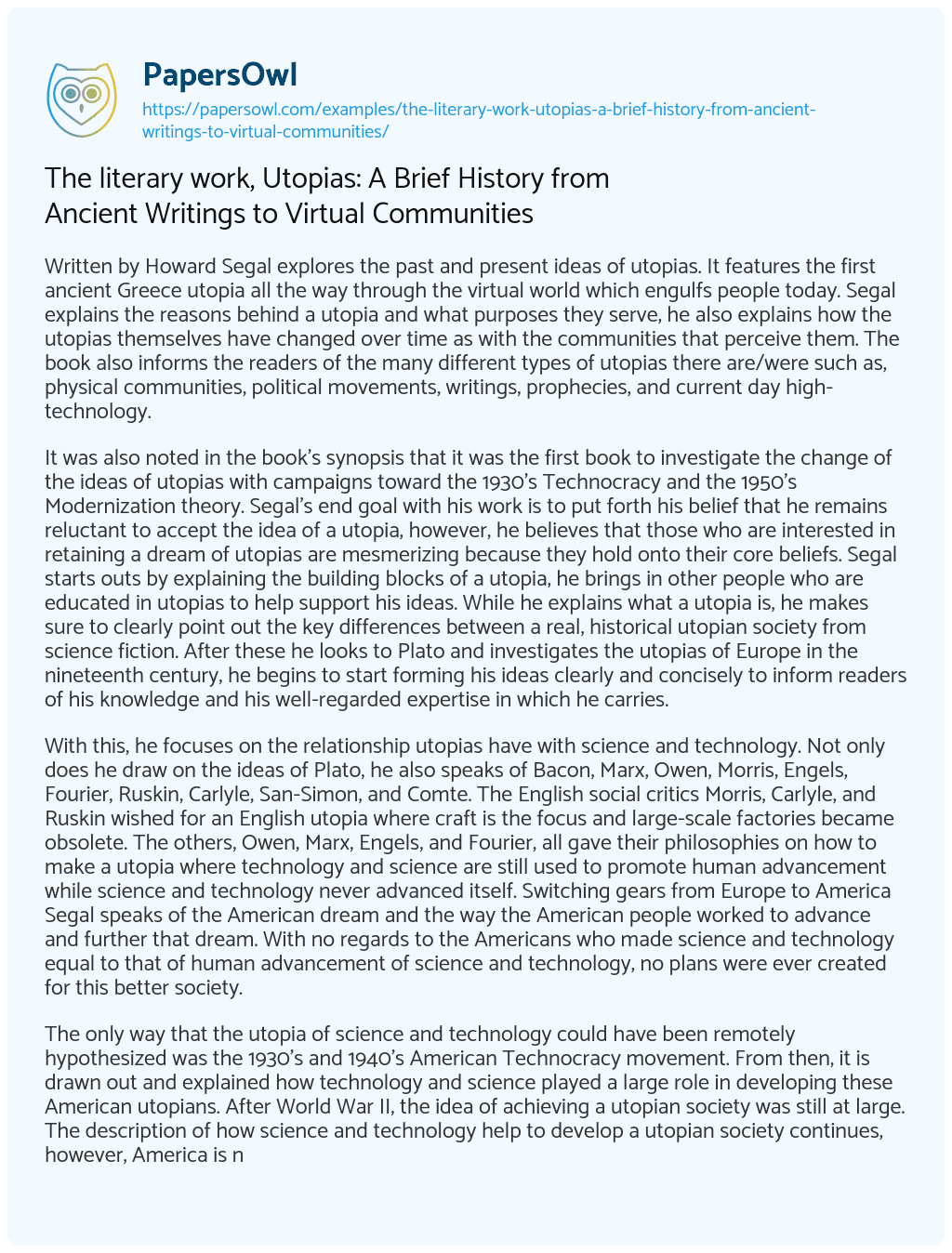 Written by Howard Segal explores the past and present ideas of utopias. It features the first ancient Greece utopia all the way through the virtual world which engulfs people today. Segal explains the reasons behind a utopia and what purposes they serve, he also explains how the utopias themselves have changed over time as with the communities that perceive them. The book also informs the readers of the many different types of utopias there are/were such as, physical communities, political movements, writings, prophecies, and current day high-technology.

It was also noted in the book’s synopsis that it was the first book to investigate the change of the ideas of utopias with campaigns toward the 1930’s Technocracy and the 1950’s Modernization theory. Segal’s end goal with his work is to put forth his belief that he remains reluctant to accept the idea of a utopia, however, he believes that those who are interested in retaining a dream of utopias are mesmerizing because they hold onto their core beliefs. Segal starts outs by explaining the building blocks of a utopia, he brings in other people who are educated in utopias to help support his ideas. While he explains what a utopia is, he makes sure to clearly point out the key differences between a real, historical utopian society from science fiction. After these he looks to Plato and investigates the utopias of Europe in the nineteenth century, he begins to start forming his ideas clearly and concisely to inform readers of his knowledge and his well-regarded expertise in which he carries.

The only way that the utopia of science and technology could have been remotely hypothesized was the 1930’s and 1940’s American Technocracy movement. From then, it is drawn out and explained how technology and science played a large role in developing these American utopians. After World War II, the idea of achieving a utopian society was still at large. The description of how science and technology help to develop a utopian society continues, however, America is no longer the focus. He shifts the focus to the need for scientists and engineers in a utopia under development. In this section, Segal analyzes how people now wish to become wealthy off of the tensions towards the future. There are three key claims made: the first claim introduces the idea that science and technology will make the west a more prosperous place to live. The second claim being that any introduction of science and technology makes former strides in the field minute.

The final claim states that all revolutions regarding science and technology can be ignores because the future will be widely different from the past. Moving forward the focus is now on the present time period focusing on utopias reestablishing and coming back into society. He describes science fiction, digital publishing, social media, and communities developed through social media; these are tools used by modern day people to explore different ways one can live digitally. While Segal did openly state his apprehension toward utopias and their societies, he passionately takes claim as to the reason behind utopias still being influential in the present and future times. While at the beginning of this literary work Segal does show bias that may have negatively impacted his ideas, that bias being his statement that he himself shows apprehension towards utopias, he offers the readers brilliant insight to both sides of the argument; he himself kept and open mind about those who are intoxicated by the idea of utopias. His openness to both sides of the argument allots for the credibility of his works; these are also not undermined by his bias.

Segal exquisitely satisfies his thesis by drawing in on experiences and ideas of others with outstanding credibility. He draws in ideas from people who think as he does and ideas from those who do not think as he does, however, Segal professionally approaches both sides with facts and evidence to give his readers accurate findings on both sides of the utopian spectrum. The book, being intellectually on a different level than I, was written exquisitely and scholarly. It can be seen from the work that Segal understands the topic and has spent time researching and gaining ideas. While fact filled, the book was as bit hard to read because it was fact filled to the point that it read almost as a textbook rather than a nonfiction piece. Segal gives a table of contents in his book which is particularly helpful for gaining main idea concepts before fulling engaging into the book, focusing on the table of contents first helped personally in understand some of what was going to be discussed in each chapter.

Work in a Remote or Virtual Team

Their Eyes were Watching God: Sexism in Florida Communities