The Life and Political Career of Martin Van Buren 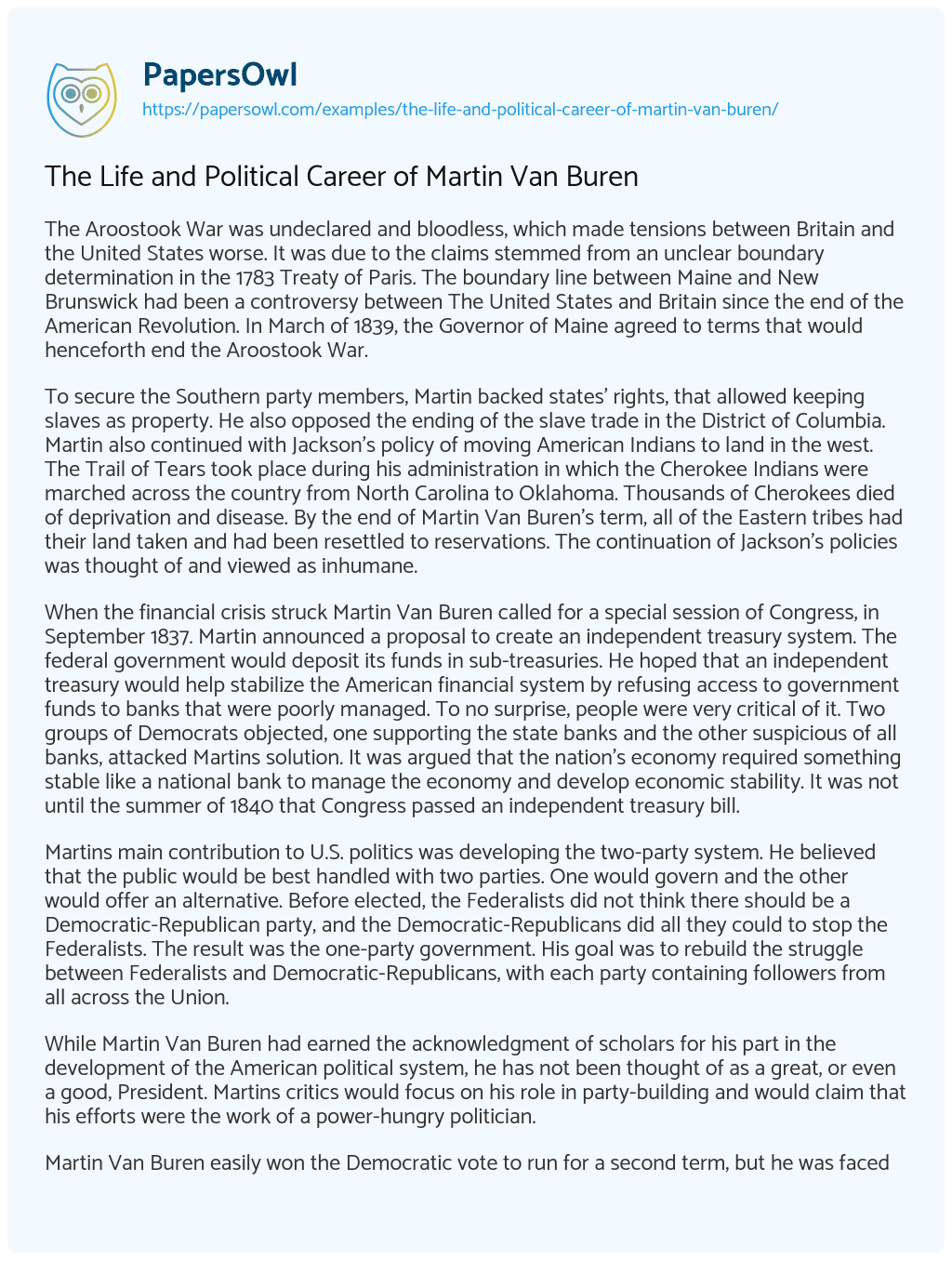 The Aroostook War was undeclared and bloodless, which made tensions between Britain and the United States worse. It was due to the claims stemmed from an unclear boundary determination in the 1783 Treaty of Paris. The boundary line between Maine and New Brunswick had been a controversy between The United States and Britain since the end of the American Revolution. In March of 1839, the Governor of Maine agreed to terms that would henceforth end the Aroostook War.

To secure the Southern party members, Martin backed states’ rights, that allowed keeping slaves as property. He also opposed the ending of the slave trade in the District of Columbia. Martin also continued with Jackson’s policy of moving American Indians to land in the west. The Trail of Tears took place during his administration in which the Cherokee Indians were marched across the country from North Carolina to Oklahoma. Thousands of Cherokees died of deprivation and disease. By the end of Martin Van Buren’s term, all of the Eastern tribes had their land taken and had been resettled to reservations. The continuation of Jackson’s policies was thought of and viewed as inhumane.

When the financial crisis struck Martin Van Buren called for a special session of Congress, in September 1837. Martin announced a proposal to create an independent treasury system. The federal government would deposit its funds in sub-treasuries. He hoped that an independent treasury would help stabilize the American financial system by refusing access to government funds to banks that were poorly managed. To no surprise, people were very critical of it. Two groups of Democrats objected, one supporting the state banks and the other suspicious of all banks, attacked Martins solution. It was argued that the nation’s economy required something stable like a national bank to manage the economy and develop economic stability. It was not until the summer of 1840 that Congress passed an independent treasury bill.

While Martin Van Buren had earned the acknowledgment of scholars for his part in the development of the American political system, he has not been thought of as a great, or even a good, President. Martins critics would focus on his role in party-building and would claim that his efforts were the work of a power-hungry politician.

Martin Van Buren easily won the Democratic vote to run for a second term, but he was faced with many difficulties in 1840 election. Martins presidency had been difficult, with the economy in a severe financial crisis, and many other issues, such as slavery, the western expansion, and tension with Great Britain. This provided many opportunities for Van Buren’s political opponents to criticize his choices.

The election between Martins democratic party and The Whigs party candidate, William Henry Harrison resulted in the largest turnout of any election up to that point in history. Martin was easily defeated by William Harrison with 234 electoral votes. Martin could not beat the opposition from the southern states that had supported the immediate annexation of Texas. On March fourth, 1841, William Henry Harrison was inaugurated as the ninth president of the united states.

Even though Martin Van Buren had lost in the 1840 election, he did not think of it as the end of his political career. Four years after his failed bid for a second term, Van Buren expected he would again receive the Democratic nomination, but the people were in favor of James K. Polk. Polk supported the annexation of Oregon and Texas, which was much more popular than Martins stance against it. Van Buren attempted to run again in 1848 as a member of the Free Soil Party, which was mostly made up of anti-slavery groups, but he had only received 10 percent of the vote.

The 1848 election had finally marked the end of Martin Van Buren’s political career. In the early 1850s, Martin returned to Kinderhook to write his memoirs as well as a study of the American political parties. He traveled a lot and spent time with his surviving children and grandchildren. He loved their company. Martin Van Buren had lived to see the coming of the Civil War and he supported President Lincoln’s decisions. Martin Van Buren died in 1862, at age seventy-nine and was buried in the Kinderhook Cemetery.

The Life and Political Career of Martin Van Buren. (2021, Mar 20). Retrieved from https://papersowl.com/examples/the-life-and-political-career-of-martin-van-buren/

Democratic Party in the United States

Barack Obama: his Life and Career