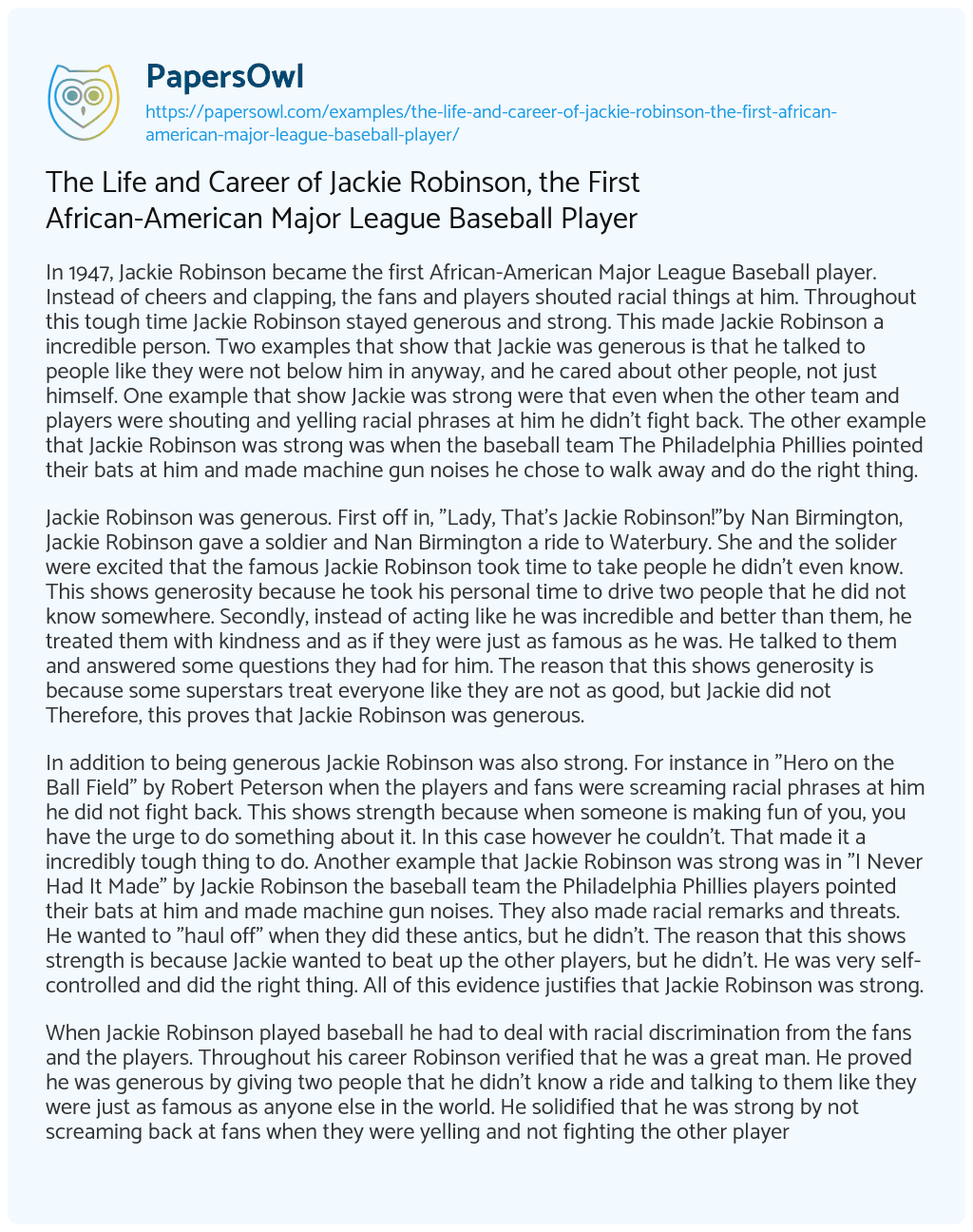 In 1947, Jackie Robinson became the first African-American Major League Baseball player. Instead of cheers and clapping, the fans and players shouted racial things at him. Throughout this tough time Jackie Robinson stayed generous and strong. This made Jackie Robinson a incredible person. Two examples that show that Jackie was generous is that he talked to people like they were not below him in anyway, and he cared about other people, not just himself. One example that show Jackie was strong were that even when the other team and players were shouting and yelling racial phrases at him he didn’t fight back. The other example that Jackie Robinson was strong was when the baseball team The Philadelphia Phillies pointed their bats at him and made machine gun noises he chose to walk away and do the right thing.

Jackie Robinson was generous. First off in, “Lady, That’s Jackie Robinson!”by Nan Birmington, Jackie Robinson gave a soldier and Nan Birmington a ride to Waterbury. She and the solider were excited that the famous Jackie Robinson took time to take people he didn’t even know. This shows generosity because he took his personal time to drive two people that he did not know somewhere. Secondly, instead of acting like he was incredible and better than them, he treated them with kindness and as if they were just as famous as he was. He talked to them and answered some questions they had for him. The reason that this shows generosity is because some superstars treat everyone like they are not as good, but Jackie did not Therefore, this proves that Jackie Robinson was generous.

In addition to being generous Jackie Robinson was also strong. For instance in “Hero on the Ball Field” by Robert Peterson when the players and fans were screaming racial phrases at him he did not fight back. This shows strength because when someone is making fun of you, you have the urge to do something about it. In this case however he couldn’t. That made it a incredibly tough thing to do. Another example that Jackie Robinson was strong was in “I Never Had It Made” by Jackie Robinson the baseball team the Philadelphia Phillies players pointed their bats at him and made machine gun noises. They also made racial remarks and threats. He wanted to “haul off” when they did these antics, but he didn’t. The reason that this shows strength is because Jackie wanted to beat up the other players, but he didn’t. He was very self-controlled and did the right thing. All of this evidence justifies that Jackie Robinson was strong.

When Jackie Robinson played baseball he had to deal with racial discrimination from the fans and the players. Throughout his career Robinson verified that he was a great man. He proved he was generous by giving two people that he didn’t know a ride and talking to them like they were just as famous as anyone else in the world. He solidified that he was strong by not screaming back at fans when they were yelling and not fighting the other players that were acting childishly. Jackie Robinson taught us how to stay strong in difficult situations.

The Desegregation of American Baseball: a Jackie Robinson Story