The Importance of Equality and Order for Hammurabi 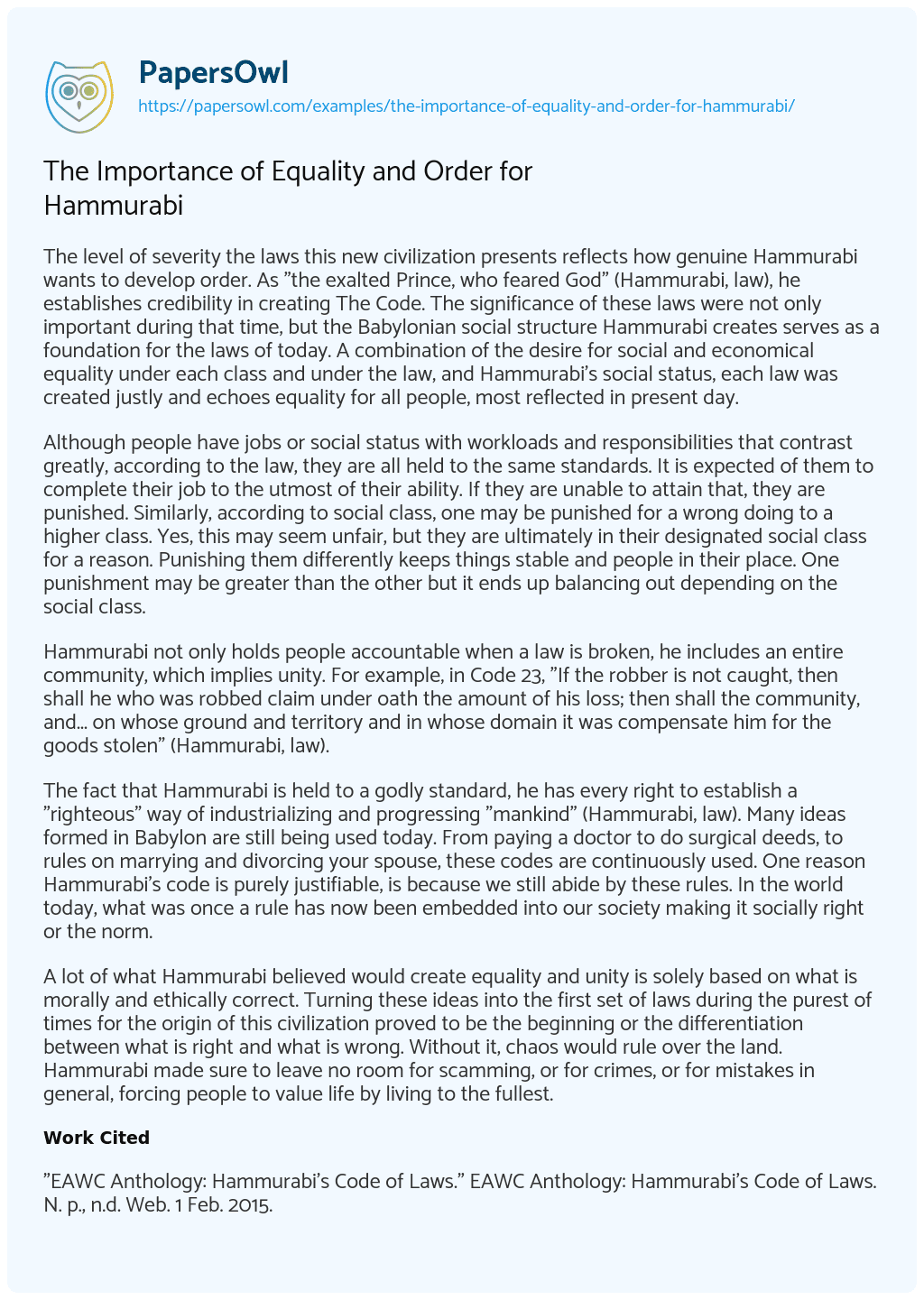 The level of severity the laws this new civilization presents reflects how genuine Hammurabi wants to develop order. As “the exalted Prince, who feared God” (Hammurabi, law), he establishes credibility in creating The Code. The significance of these laws were not only important during that time, but the Babylonian social structure Hammurabi creates serves as a foundation for the laws of today. A combination of the desire for social and economical equality under each class and under the law, and Hammurabi’s social status, each law was created justly and echoes equality for all people, most reflected in present day.

Although people have jobs or social status with workloads and responsibilities that contrast greatly, according to the law, they are all held to the same standards. It is expected of them to complete their job to the utmost of their ability. If they are unable to attain that, they are punished. Similarly, according to social class, one may be punished for a wrong doing to a higher class. Yes, this may seem unfair, but they are ultimately in their designated social class for a reason. Punishing them differently keeps things stable and people in their place. One punishment may be greater than the other but it ends up balancing out depending on the social class.

Hammurabi not only holds people accountable when a law is broken, he includes an entire community, which implies unity. For example, in Code 23, “If the robber is not caught, then shall he who was robbed claim under oath the amount of his loss; then shall the community, and… on whose ground and territory and in whose domain it was compensate him for the goods stolen” (Hammurabi, law).

The fact that Hammurabi is held to a godly standard, he has every right to establish a “righteous” way of industrializing and progressing “mankind” (Hammurabi, law). Many ideas formed in Babylon are still being used today. From paying a doctor to do surgical deeds, to rules on marrying and divorcing your spouse, these codes are continuously used. One reason Hammurabi’s code is purely justifiable, is because we still abide by these rules. In the world today, what was once a rule has now been embedded into our society making it socially right or the norm.

A lot of what Hammurabi believed would create equality and unity is solely based on what is morally and ethically correct. Turning these ideas into the first set of laws during the purest of times for the origin of this civilization proved to be the beginning or the differentiation between what is right and what is wrong. Without it, chaos would rule over the land. Hammurabi made sure to leave no room for scamming, or for crimes, or for mistakes in general, forcing people to value life by living to the fullest.

The Importance of Equality and Order for Hammurabi. (2022, Nov 18). Retrieved from https://papersowl.com/examples/the-importance-of-equality-and-order-for-hammurabi/

The Similarities and Differences between the Code of Hammurabi, the Exodus, and the Torah

An Overview of the Hammurabi’s Code, its Contents, Meaning, Importance, Origin and Connection with Subsequent Legal Systems

Fairness of the Just Rule of Hammurabi

Hammurabi’s Law: what is Just?

A Research on the Code of Hammurabi

The Function and Usefulness of the Hammurabi Code