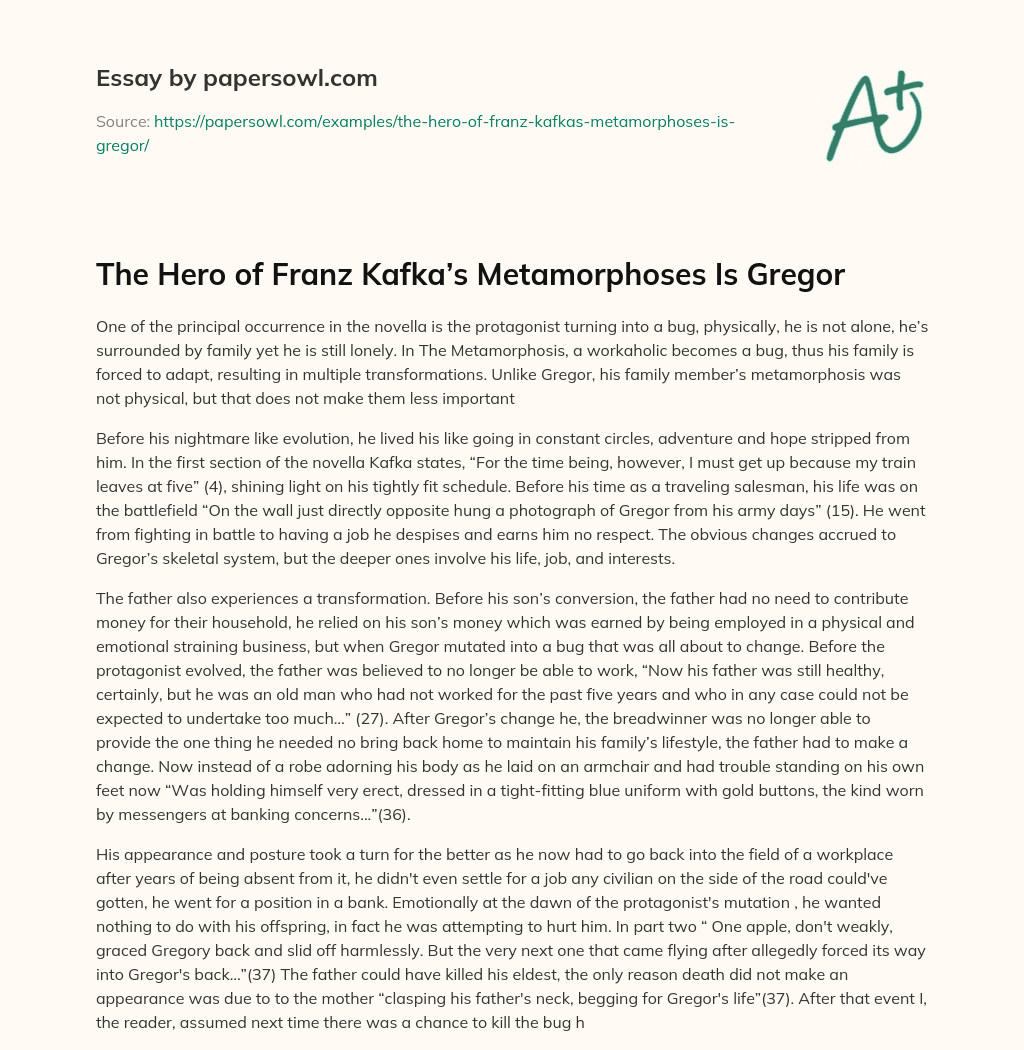 One of the principal occurrence in the novella is the protagonist turning into a bug, physically, he is not alone, he’s surrounded by family yet he is still lonely. In The Metamorphosis, a workaholic becomes a bug, thus his family is forced to adapt, resulting in multiple transformations. Unlike Gregor, his family member’s metamorphosis was not physical, but that does not make them less important

Before his nightmare like evolution, he lived his like going in constant circles, adventure and hope stripped from him. In the first section of the novella Kafka states, “For the time being, however, I must get up because my train leaves at five” (4), shining light on his tightly fit schedule. Before his time as a traveling salesman, his life was on the battlefield “On the wall just directly opposite hung a photograph of Gregor from his army days” (15). He went from fighting in battle to having a job he despises and earns him no respect. The obvious changes accrued to Gregor’s skeletal system, but the deeper ones involve his life, job, and interests.

The father also experiences a transformation. Before his son’s conversion, the father had no need to contribute money for their household, he relied on his son’s money which was earned by being employed in a physical and emotional straining business, but when Gregor mutated into a bug that was all about to change. Before the protagonist evolved, the father was believed to no longer be able to work, “Now his father was still healthy, certainly, but he was an old man who had not worked for the past five years and who in any case could not be expected to undertake too much…” (27). After Gregor’s change he, the breadwinner was no longer able to provide the one thing he needed no bring back home to maintain his family’s lifestyle, the father had to make a change. Now instead of a robe adorning his body as he laid on an armchair and had trouble standing on his own feet now “Was holding himself very erect, dressed in a tight-fitting blue uniform with gold buttons, the kind worn by messengers at banking concerns…”(36).

His appearance and posture took a turn for the better as he now had to go back into the field of a workplace after years of being absent from it, he didn’t even settle for a job any civilian on the side of the road could’ve gotten, he went for a position in a bank. Emotionally at the dawn of the protagonist’s mutation , he wanted nothing to do with his offspring, in fact he was attempting to hurt him. In part two “ One apple, don’t weakly, graced Gregory back and slid off harmlessly. But the very next one that came flying after allegedly forced its way into Gregor’s back…”(37) The father could have killed his eldest, the only reason death did not make an appearance was due to to the mother “clasping his father’s neck, begging for Gregor’s life”(37). After that event I, the reader, assumed next time there was a chance to kill the bug he would be first to take action however, he proved that assumption wrong. In the last part of the novella when the Geeta wanted to kill Gregor, the father agreed at first then proceeds to say, “if he could understand us, then maybe we could come to an agreement with him” (49). In that moment hesitation crawled it’s way to his consciousness as the thought of ending Gregor’s life and bothered giving the pronoun“him”, at least mentioning a gender unlike the sister that called him “it”.

While Gregor’s metamorphosis is physical his sister’s was emotional. She had always loved and cared for Gregor, before and after he changed into the bug. At the beginning of the transformation, Grete brought food, even keeping in mind what he enjoyed and what repulsed him, “his favorite drink and surely the reason his sister had let it out for him” (22). As time progresses she no longer places importance in his meals, no longer caring if he savors it or not.

Before the incident of Gregor’s change, Grete had to do almost nothing around the house, they had maids to do everything for them, now she had to cook and clean. At the genesis of the novella, she felt strongly towards her brother, she loved and admired him, but in the end, the greatest plot twist happened. “I won’t pronounce the name of my brother in front of this monster, and so all I say is: we have to try to get rid of it”(48). She wanted to kill her brother due to the labor and pain his new self brought the family. She didn’t even want her brothers name to slip out while the “monster” was present. “It” becoming her way of acknowledging the person who used to maintain her way of living, longer considered him a brother, son, human, or even a bug. His name no longer slips past the people whose roof he kept up, stripping him of his identity.

As I mentioned before Gregor physically went through the greatest metamorphosis ,however, his sister was the one who went from a lovable younger sister who tended her helpless brother to an emotionless person who told her parents they had to kill their own son.

The Hero of Franz Kafka’s Metamorphoses Is Gregor. (2022, Aug 27). Retrieved from https://papersowl.com/examples/the-hero-of-franz-kafkas-metamorphoses-is-gregor/