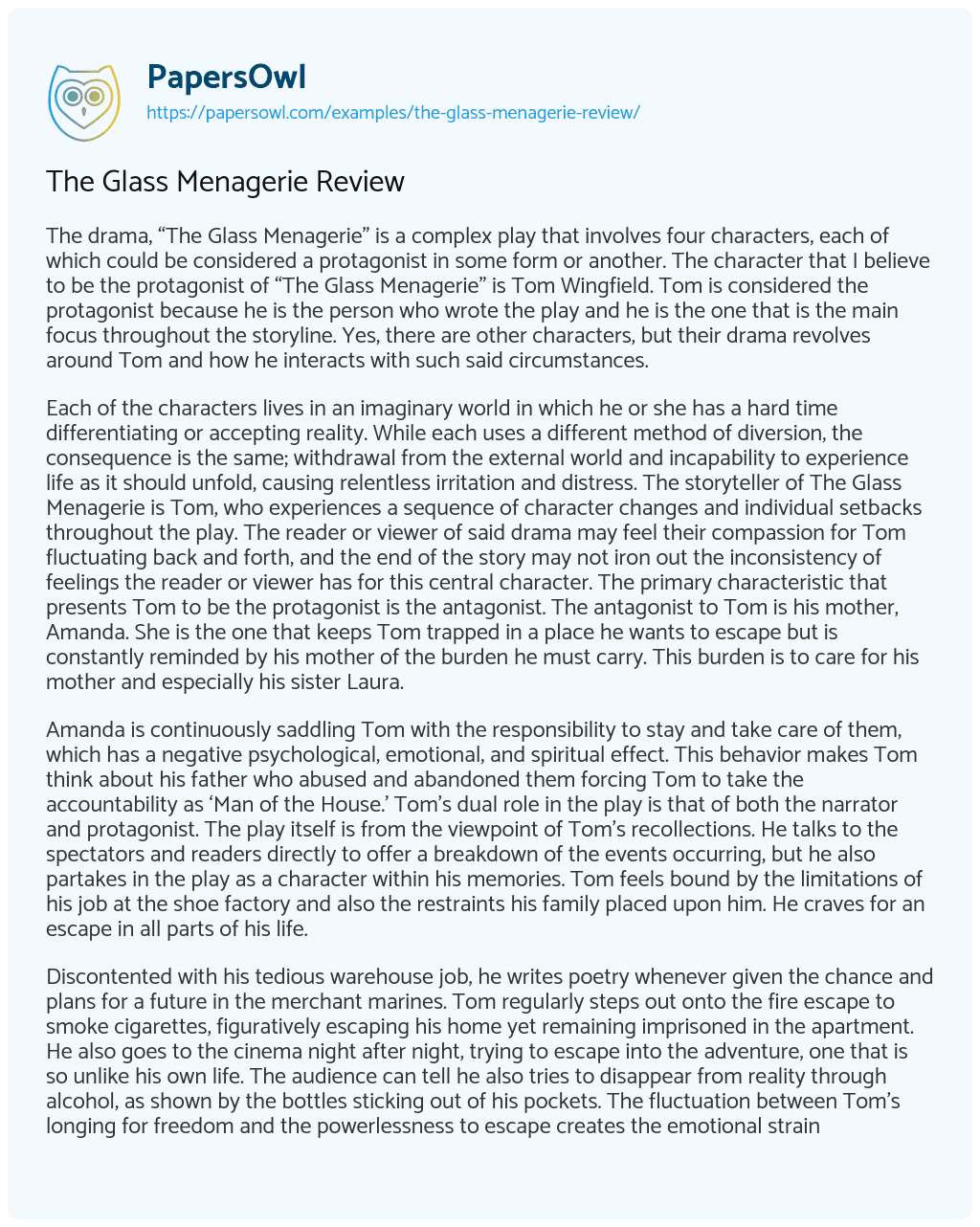 The drama, “The Glass Menagerie” is a complex play that involves four characters, each of which could be considered a protagonist in some form or another. The character that I believe to be the protagonist of “The Glass Menagerie” is Tom Wingfield. Tom is considered the protagonist because he is the person who wrote the play and he is the one that is the main focus throughout the storyline. Yes, there are other characters, but their drama revolves around Tom and how he interacts with such said circumstances.

Each of the characters lives in an imaginary world in which he or she has a hard time differentiating or accepting reality. While each uses a different method of diversion, the consequence is the same; withdrawal from the external world and incapability to experience life as it should unfold, causing relentless irritation and distress. The storyteller of The Glass Menagerie is Tom, who experiences a sequence of character changes and individual setbacks throughout the play. The reader or viewer of said drama may feel their compassion for Tom fluctuating back and forth, and the end of the story may not iron out the inconsistency of feelings the reader or viewer has for this central character. The primary characteristic that presents Tom to be the protagonist is the antagonist. The antagonist to Tom is his mother, Amanda. She is the one that keeps Tom trapped in a place he wants to escape but is constantly reminded by his mother of the burden he must carry. This burden is to care for his mother and especially his sister Laura.

Amanda is continuously saddling Tom with the responsibility to stay and take care of them, which has a negative psychological, emotional, and spiritual effect. This behavior makes Tom think about his father who abused and abandoned them forcing Tom to take the accountability as ‘Man of the House.’ Tom’s dual role in the play is that of both the narrator and protagonist. The play itself is from the viewpoint of Tom’s recollections. He talks to the spectators and readers directly to offer a breakdown of the events occurring, but he also partakes in the play as a character within his memories. Tom feels bound by the limitations of his job at the shoe factory and also the restraints his family placed upon him. He craves for an escape in all parts of his life.

Discontented with his tedious warehouse job, he writes poetry whenever given the chance and plans for a future in the merchant marines. Tom regularly steps out onto the fire escape to smoke cigarettes, figuratively escaping his home yet remaining imprisoned in the apartment. He also goes to the cinema night after night, trying to escape into the adventure, one that is so unlike his own life. The audience can tell he also tries to disappear from reality through alcohol, as shown by the bottles sticking out of his pockets. The fluctuation between Tom’s longing for freedom and the powerlessness to escape creates the emotional strain which is the primary element of the play. Even though at the end of the story Tom deserts his family to chase after a solo future, the fact that he wrote this play demonstrates he can never really abandon his memories.

Therefore, he can never entirely leave his family behind. Topic sentence here. “The ongoing linguistic actions among the characters often dwell around presuppositions, creating a sense of curiosity in the mind of the readers. When the characters are immersed in dialogic-conversation, their discourse seems to convey diverse views at the cognitive level but is quite interdependent at the structural level.” (Nalliveettil, pg.9).

Another showing of Tom being the protagonist is that he is number one in exaggerating the discourse between the characters through melodramatic struggles, and amusing words to make it suitable to the intelligence and feelings of the readers and viewers. The conversations between the characters help to shape their individualities and unravels their tactics to handle various environments and circumstances. Tom can somehow make a mountain out of a molehill, always making more out of the situation than what it should be. Somehow, everyone does him wrong and makes his life incomplete and not worth the time and effort. Tom wants to be carefree and reckless, not burdened down with responsibility, especially one that should not be his, as in his mother and sister. The language and actions of Tom demonstrate that he is the main focus of the play, one which the drama would not be the same without. As the protagonist, it is only expected that the audience finds Tom being the only breadwinner in the family. Tom is irritated by having to be employed at a job he loathes to take care of his mother and sister. Every day, the need to leave home and go out on his own grows. Amanda’s constriction and unremitting control over Tom’s life tries his tolerance; if he does not leave in the near future, he will lose all hope of attaining his dreams and contentment while staying stuck in his crypt-like reality. Tom seeks adventure in his life but is restricted within his employment and mother’s constraints. “I go to the movies because – I like adventure.

Adventure is something I don’t have much of,” (Williams, p30) Tom stated. Tom’s job at the shoe factory is ordinary; something that Tom is not. He does the same thing day after day all week long; this is a position that does not allow his mind to be free, away from the weights that hold him down in life. “You’re going to listen, and no more insolence from you! I’m at the end of my patience!” (Williams, P19). Amanda roared. Even though Tom is an adult, his mother governs over everything he says and does. “To the three-member family, life is definitely hard.

What’s worse, however, is their lack of skills to lubricate the relationship between them, especially that between Amanda and Tom.” It gives the impression that they can never connect peacefully for several sentences before they dive into disagreement with each other. To Tom’s passion for literature, Amanda’s retort is to control it in a ruthless way. And as the conflict shapes, it’s expected for it to breakdown. Just as described in Scene Three, there’s a fierce quarrel between Amanda and Tom, which frightens Laura. Transition sentence. Tom is restricted from traveling and doing what he wants because of his family needs. Tom is a responsible guy and does not want to leave his mom and sister without some a source of income. Tom has to make a choice, which many people decide in today’s society have to make. It comes down to each person, and the situation the individual is involved within. Tom is sandwiched between his dedication to Laura, the one person he cannot let down emotionally, and his desires. Ultimately, Tom does escape by joining the Merchant Marines, yet he cannot be content because of his attachment to her.

Symbolism in the Glass Menagerie by Tennesse Williams