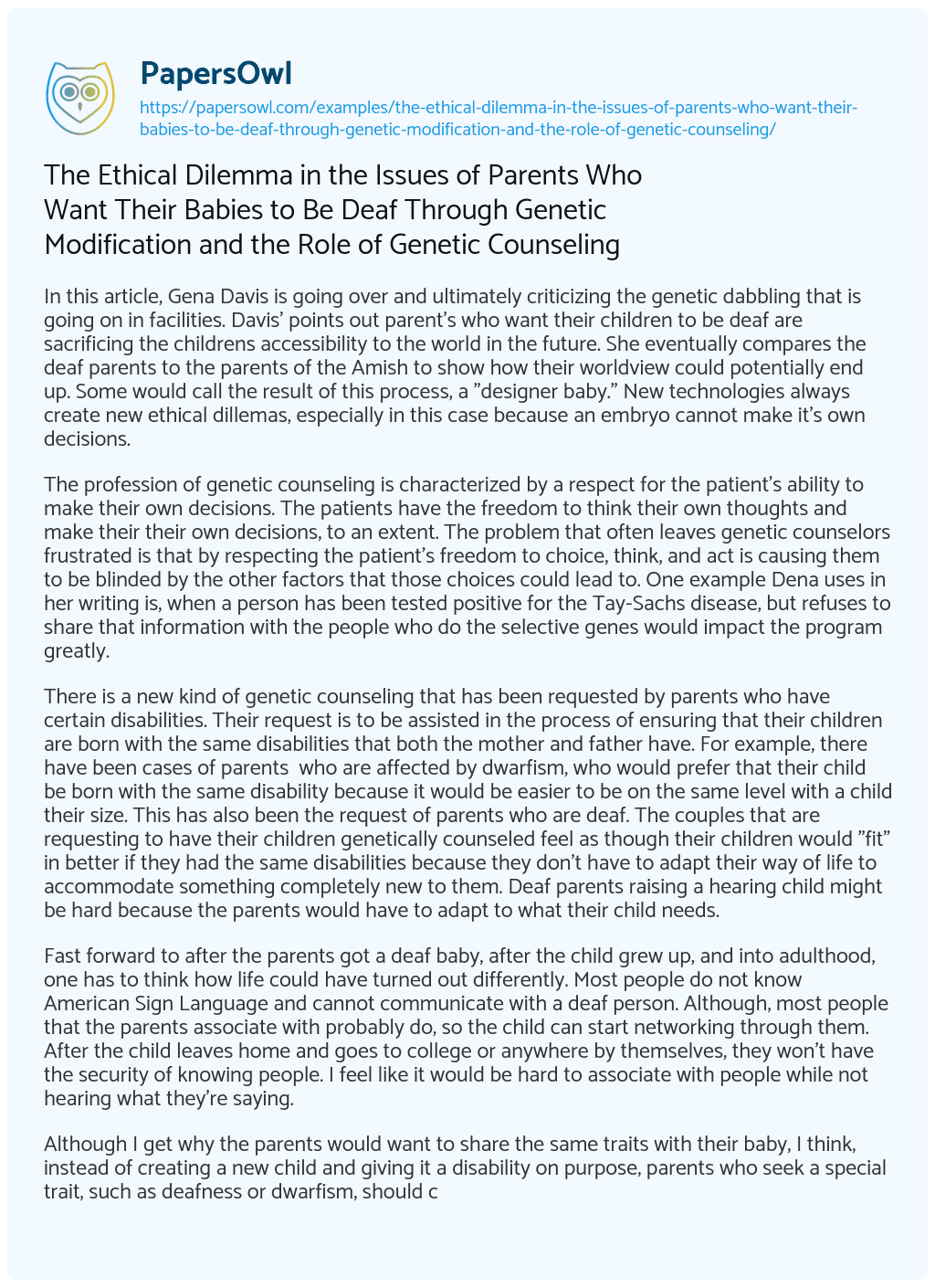 In this article, Gena Davis is going over and ultimately criticizing the genetic dabbling that is going on in facilities. Davis’ points out parent’s who want their children to be deaf are sacrificing the childrens accessibility to the world in the future. She eventually compares the deaf parents to the parents of the Amish to show how their worldview could potentially end up. Some would call the result of this process, a “designer baby.” New technologies always create new ethical dillemas, especially in this case because an embryo cannot make it’s own decisions.

The profession of genetic counseling is characterized by a respect for the patient’s ability to make their own decisions. The patients have the freedom to think their own thoughts and make their their own decisions, to an extent. The problem that often leaves genetic counselors frustrated is that by respecting the patient’s freedom to choice, think, and act is causing them to be blinded by the other factors that those choices could lead to. One example Dena uses in her writing is, when a person has been tested positive for the Tay-Sachs disease, but refuses to share that information with the people who do the selective genes would impact the program greatly.

There is a new kind of genetic counseling that has been requested by parents who have certain disabilities. Their request is to be assisted in the process of ensuring that their children are born with the same disabilities that both the mother and father have. For example, there have been cases of parents  who are affected by dwarfism, who would prefer that their child be born with the same disability because it would be easier to be on the same level with a child their size. This has also been the request of parents who are deaf. The couples that are requesting to have their children genetically counseled feel as though their children would “fit” in better if they had the same disabilities because they don’t have to adapt their way of life to accommodate something completely new to them. Deaf parents raising a hearing child might be hard because the parents would have to adapt to what their child needs.

Fast forward to after the parents got a deaf baby, after the child grew up, and into adulthood, one has to think how life could have turned out differently. Most people do not know American Sign Language and cannot communicate with a deaf person. Although, most people that the parents associate with probably do, so the child can start networking through them. After the child leaves home and goes to college or anywhere by themselves, they won’t have the security of knowing people. I feel like it would be hard to associate with people while not hearing what they’re saying.

Although I get why the parents would want to share the same traits with their baby, I think, instead of creating a new child and giving it a disability on purpose, parents who seek a special trait, such as deafness or dwarfism, should consider adoption because many babies who are born with a “defect” are not wanted by their birth parents. Giving these “defect” babies a chance with a loving family who wants it. Deaf parents (I’m focusing so much of deafness because that’s what the author gave) don’t see their disability as a disability. They see it more as a trait and culture, an integral part of their identity. Another point against selecting a deaf embryo, is what if the child found out that their parents “made them” that way and grew up resenting the parents for their alternative lifestyle. The child may feel robbed because he or she cannot hear the sounds around him or her. Davis points out that their “open future”, a term that comes from philosopher Joel Feinburg, is being compromised for the sake of the parents; the parents are limiting the child’s future. On the same hand, if not for the selection of the deaf embryo, the child would have never been born at all which means that they’re not depriving the born child of anything at all.

Parents who have chosen to have a deaf baby know the implications that they are asking for but they consider being apart of a Deaf culture a good thing. Is it wrong for them to be proud of their Deaf culture and want to continue it? Not necessarily. The child will grow up in a loving home and will have special accommodations that the parents have/will put in place so the child can lead a fulfilling life.

If a deaf offspring grew up and decided they wanted to hear, that individual could go to a hearing professional and get hearing aids put in place. I’m not a professional at hearing aids, but with our new technologies, it is easier than before to get your ears to work. It’s a good possibility that they can reverse the outcome that their parents wanted.

In the end, this matter is not for me to decide. If parents think that a uniform family is going to bring everyone closer together, let them. As long as a professional gene doctor can produce a healthy child, regardless of specific defects, let them so they make the parents-to-be be happy.

The Ethical Dilemma in the Issues of Parents Who Want Their Babies to Be Deaf Through Genetic Modification and the Role of Genetic Counseling. (2022, Nov 16). Retrieved from https://papersowl.com/examples/the-ethical-dilemma-in-the-issues-of-parents-who-want-their-babies-to-be-deaf-through-genetic-modification-and-the-role-of-genetic-counseling/

“Do our Think that Babies are Adorable?”

The Ethical Dilemma in the Use of Deception by Psychologists